Kansas guard Isaiah Moss (4) puts up a three during practice on Wednesday, March 11, 2020 at Sprint Center.

Kansas City, Mo. — At Sprint Center on Wednesday afternoon for a pre-Big 12 Tournament shootaround in front of thousands of empty seats, the No. 1-ranked Kansas Jayhawks got a little preview of what the unconventional version of March Madness that awaits them. At least in terms of the atmosphere.

The NCAA announced shortly before KU’s players and coaches hit the court that all upcoming national tournament games would be played without fans, due to escalating concerns about the novel coronavirus. Before the night was over, Big 12 commissioner Bob Bowlsby said the same would be true for the remainder of the Big 12’s men’s and women’s basketball championships.

Even before they learned about the conference’s decision, the Jayhawks began bracing for their new abnormal basketball reality. 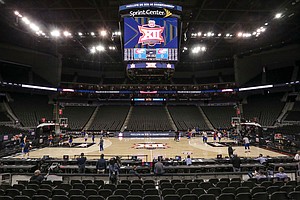 Kansas players practice on Wednesday, March 11, 2020 at Sprint Center. On Wednesday afternoon, the NCAA announced that upcoming basketball tournaments would be played without fans because of concerns about the spread of the coronavirus.

Bill Self broke the news about the NCAA Tournament to his team inside the mostly uninhabited arena. KU’s head coach gauged from their body language that they seemed OK with all that would entail, because he explained to them the current circumstances in the country made it unavoidable.

But the primary theme that Self would go on to hammer home, as the Jayhawks began adjusting to this unprecedented measure on the fly, was one of the “love of basketball,” Christian Braun said.

“We obviously want to play in front of the fans,” said Braun, a freshman guard. “But it’s bigger than us. We play for the love of the game.”

Following KU’s shootaround, the three Jayhawks tasked with fielding COVID-19 adjacent questions when they typically respond to inquiries about 3-point shooting, defense and subjects that are in their wheelhouse, all appeared as prepared as anyone in their position could be for the bizarre basketball scenes to come.

“Having the fans’ support around is always important. It’s always a great feeling to have the crowd with you,” sophomore forward David McCormack said. “But this situation is definitely bigger than basketball. It’s more about health and well-being.”

Though there had to be on a human level some sort of disappointment for KU’s players, who won’t get the typical Big Dance experience in the weeks ahead, they handled it with maturity and optimism. After all, it looks like their season will continue on, while elsewhere, for instance, the Ivy League cancelled its entire spring sports schedule.

“We still have to be grateful for and (feel) fortunate enough to play the sport that we love,” McCormack said, “because that can be taken away as well. So we just have to count our blessings.”

What’s to come in basketball arenas around the country will be unlike anything any player has ever experienced. Sure, they’ve shot around and practiced in cavernous venues with no one watching. But now they’ll be competing for conference and national titles in that setting.

With the situation changing by the minute, Moss was asked before the Big 12 reached its decision about the possibility of playing in a desolate Sprint Center for KU’s quarterfinal. How do you mentally prepare for something like that on such a quick turnaround?

“Coach kind of talked about that a little bit. But we can’t really control it,” Moss said. “So if they do decide to not allow fans to come in, then we’ve still got to compete at a high level and still try to win a ball game.”

The Jayhawks aim to win as many as nine more times in this strange new version of March Madness. And all they can do is seek out the good that could come from it.

As in most scenarios, the players are following Self’s directive.

“It's unfortunate, but, you know, there's not gonna be an asterisk next to it — ‘well they played without fans’ in the record books,” Self said. “I mean, you still have a chance to have a very similar type of legacy. And I did tell him this, it'll be the highest-rated television tournament that anybody's ever seen. So that’s a positive, to be a part of that.”

Self is handling this perfectly. When you can't change your circumstances all you can do is change your self (no pun intended). Control what you can, and let the rest go.

However, you know who is hurt by this the most? KU. Not just in the conference tournament, but in the NCAA. One big advantage of being the top seed is playing closer to home, which means closer to fans. Now, the only thing a seed determines is who wears white. This takes away a bit of the advantage of being a top seed.

The players should feel blessed if March Madness can make it all of the way to the championship game with the empty arena plan. All it will take is one player or one coach coming down with and testing positive for the Coronavirus and the whole thing will be canceled. Let’s hope that doesn’t happen.

1] Just got done watching Iowa State blow an upset and looking at the crowd shots it looked like a lot more than 250 ISU fans in the stands.

2] My guess is that if there is an excess of unused seats per school, other schools can buy them.

4] Basically, does this ruling mean no students, no band members, no cheer leaders and only rich alumni who don't cheer?????

5] If they gave an NCAA Tournament and no one came, would there actually have been an NCAA tournament??

6] The NCAA actually putting peoples health ahead of making money????.......yes, the Apocalypse is indeed upon us!!!

Tony, no bands or cheer. The tickets are for family or close friends of the athletes. But the school can allocate however they wish.

To your #5, the teams will come, so yes, there will have been a tournament.

To your #6, no it's still about $$$. It's a PR move and also clears them of liability. They are taking a loss but betting that it is a lower loss than if a fan/student died and the resulting PR hit to the brand. Additionally, this will make it the single most watched NCAA tournament in history. There is more money there than in tickets.

Wonder what the economic impact will be to the City of Kansas City as even the KU public gatherings for pep rallies are being cancelled. Hotels, restaurants, bars, on and on and on...lost revenue...and what about the people trying to make a living in those businesses?

I just know that there is someone at NCAA Tourney HQ thinking, "How much can we recoup if we put all the games on ESPN+?"

Tony, I don't think the ticket limit was in effect yet for the Wednesday games, like the ISU-OSU game. It was announced to begin with the Thursday games. Then later, of course, the remaining games are canceled.