As the Kansas football offense looks to rebound from a disappointing 2020 season, it will have to do so without receiver Andrew Parchment.

Any hopes the Jayhawks had of bringing Parchment back for an extra senior year officially vanished on Friday, as the 6-foot-2 wideout announced via his social media accounts that he entered the NCAA’s transfer portal.

Parchment, who joined the Jayhawks as a junior college transfer in the spring of 2019, thanked head coach Les Miles and receivers coach and passing game coordinator Emmett Jones for giving him “the opportunity to play for an amazing university and represent the Kansas Jayhawks.”

According to Parchment, discussions with his family led him to part ways with KU, enter the portal and play one more year of college football elsewhere in 2021.

In his first season with the Jayhawks, Parchment emerged as the offense’s breakout star. He caught 65 passes for 831 yards in 2019, and scored seven touchdowns as KU’s No. 1 receiver.

He landed on the 2020 preseason All-Big 12 first team as a result, but the KU offense stumbled throughout the months that followed, and the Jayhawks’ issues with their offensive line and quarterback play impacted Parchment’s production.

In eight games this year — Miles said Parchment missed the Texas Tech game due to a sickness — the long and speedy veteran wideout only caught 24 passes for 197 yards and a pair of touchdowns.

In six of his eight starts in 2020, Parchment finished with 27 or fewer receiving yards, including his first game at KU without a reception at Kansas State.

Miles stated recently his hopes to bring back both Parchment and senior receiver Stephon Robinson Jr., in 2021, making use of a blanket NCAA waiver that granted an extra year of eligibility to Division I athletes in all fall sports due to the pandemic.

Parchment decided to go another route.

As it turned out, the portal gained two veteran Jayhawks on Friday, as senior cornerback Kyle Mayberry also announced his plans to play for another program next year as a graduate transfer.

“It’s been a lot of ups and downs,” Mayberry stated in a note he tweeted out, “but no matter what I am appreciative of the university.” 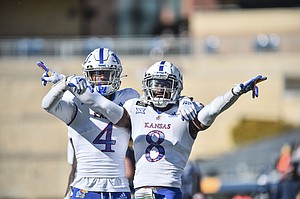 Kansas cornerbacks Elijah Jones and Kyle Mayberry react after breaking up a pass against West Virginia on Saturday, Oct. 16, 2020, in Morgantown, W.Va.

Mayberry called it “a hard decision” to seek out a transfer after “a great four and a half years” with the program.

A defensive back from Tulsa, Okla., Mayberry signed with KU in its 2016 recruiting class, under then head coach David Beaty. He played each of his first two years in the program before redshirting in 2018, and then became a regular in the secondary the past couple of years.

As a fifth-year senior, Mayberry finished the just completed season with 25 total tackles, two pass breakups and a quarterback hurry in his eight appearances, mostly as a reserve.

With Mayberry and Parchment entering the portal, there are now four KU seniors from this season who are hoping to catch on with a different team in 2021. They joined punter Kyle Thompson and center Api Mane in looking for a new home to close out their college careers.

It’s All Love.
-Money Out 🤍 pic.twitter.com/NU9c0vDNTO

Kaufman, a walk-on from Pratt, played sparingly as a reserve this year, contributing primarily on special teams. He spent four years at KU and was a redshirt junior in 2020.

Ok? I think this man had one good game a couple years ago? I remember this site hyping him constantly as a wide receiver and I got to tell you all I saw was disappearance. I know it’s hard to stay positive but my goodness with all the losses from this program the last 3 to 10 years stop writing optimistic pieces on people until they do something consistently. This site tries to make football relevant at KU and it’s just always grasping my at straws.

WTF are you talking about????? He wasn't even at KU a couple of years ago! He joined the team LAST YEAR and had the type of SEASON (not one game) that enabled him to be preseason All-Big XII. Were all of those voters fooled by positive coverage on this site???

His production suffered this year because of (a) maybe the worst offensive line in KU history, and (b) no QB that was close to the same level as Carter Stanley. Can't blame him for wanting to go elsewhere.

One lesson all young people should learn early in their lives:

Never care more about something than the people who run it do.

Jeff Long: you are on the clock. Time to get this figured out because I’m confident that a good number of sixth-graders from any school in America could.

Everyone needs to quit acting as if this is hard. It’s not. It’s easier than any job any of us has.

Dang. Without saying it, they're saying a lot about this team, staff and leadership. I hate to see it, can't say I blame them. Team regression is a tough thing.

It does seem there’s an interesting approach being applied. After a sprinkling of JCs the first year and “doing just about everything right” though doing no better in the important column than the previous “doing everything wrong” staff, the current staff seems to have scrapped it all and switched to a total youth movement. Somehow though, that’s the ADs fault.

It will be interesting to see how the transfer portal works in the first covid roster altered season. My guess is that the 4 guys will be successful, even if not quite as successful Mr Herbert was in his 1,000+ yard rushing season at VTech.

When will the BLEEDING STOP?

He's got one more year of football before his career ends for good so I can see why he wants to play for someone else. Disappointing but I get it.

Any Senor starter with any kind of chance at the next level should go use their extra year elsewhere. Goodluck Andrew. The youth movement is on and its time to focus and build the OL and DL from the ground up.

Good for him. If he thinks he has enough talent to get to the next level, then I don't blame him trying to latch on to another team where he'll be able to showcase his talent.

And if I was a 5th year senior at Kansas you bet I would think about transferring to a team that could go to a bowl game. NONE of these kids have even been close to that experience, and if you're going to graduate, and not even close to pro talent I'd want to get that experience too.

Miles is doing it the right way, but it's going to take time - something none of us wants to hear anymore.

I still think we're two solid juco offensive linemen from being out of last place, but what do I know?

I don't think he's got the talent to play on Sunday. My guess is your second paragraph is the reason why he's leaving. Who could blame him.