Kansas forward David McCormack drives to the bucket against Kansas guard Chris Teahan during a scrimmage on Tuesday, June 11, 2019 at Allen Fieldhouse.

After an entire season of hearing how sped up he was on the floor, Kansas big man David McCormack has figured out how to slow down.

Good thing, too, because McCormack now admits that all of the focus on his biggest freshman flaw got a little old.

True to his personality and humble nature, though, the KU big man never viewed the criticism as a negative.

“It was repetitive,” McCormack said with a laugh during a break at Bill Self Basketball Camp on Monday. “But at the same time it was good because it was a constant reminder not to get anxious in the plays I made.” 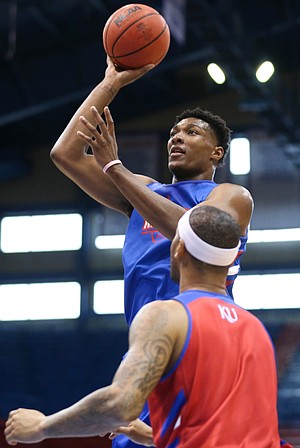 Kansas forward David McCormack (33) pulls up for a shot over former Kansas guard Travis Releford during a scrimmage on Tuesday, June 11, 2019 at Allen Fieldhouse.

Called by Self, “the most improved guy on our team, hands down,” McCormack is in the middle of a mission that began when his freshman season ended and does not appear to be stopping any time soon.

After playing at powerhouse Oak Hill Academy, which both attracts and faces some of the top prep talent in the nation, McCormack figured he was as ready as anyone to make the jump to Division I basketball.

And while he did end up starting the final 13 games of the 2018-19 season, getting from Point A to Point B had its hiccups, a reality that McCormack on Monday called “somewhat of a humbling experience.”

No matter how often McCormack focused on slowing down and making the simple play, saying it in the locker room was much easier than doing it on the court.

“You can tell yourself as much as you want to or try to believe it,” McCormack said Monday. “But (it isn’t) until you can feel good in the flow of the game (that) you can notice things slow down, when plays start to develop and things like that instead of trying to rush when things aren’t there.”

With a full season of managing the mental part of the game now in his rearview mirror, McCormack has spent the bulk of the offseason adding to his arsenal of on-court skills.

“His athletic ability has improved," Self said Monday. "And I know that’s not easy to do in a short amount of time, but he’s much more explosive.”

While he has maintained his routine of keeping his body in tip-top shape, most of McCormack's development time has gone to working on making plays off the dribble and extending his touch to mid-range jumpers and beyond.

“His shooting ability has really improved,” Self added. “I don’t know if that’ll translate day to day, but he can make a 17-footer. He’s our best big (man) shooter without question right now, unless you include (6-8 freshman) Jalen (Wilson).”

At least part of the desire to expand his range came with very specific purpose.

Last season, McCormack played 363 minutes in 34 games, and all but 50 of those came with injured center Udoka Azubuike on the bench.

With the two big bodies now facing the likelihood of playing together for both more games and longer periods of time, McCormack knew he needed to tweak his game.

“Playing with Dok, I know he’s going to take up a lot of the paint,” McCormack said. “So playing inside-out is going to help, giving him easier moves to make or just easier baskets.”

Although there remains plenty of work to do in that area — figuring out ways to pair both McCormack and Silvio De Sousa with Azubuike on the floor — McCormack said the mere fact that all of KU’s big men now have been around each other for more than a year should pay dividends when the 2019-20 season arrives.

“Size, strength, athleticism and even more experience,” said McCormack Monday, when asked for an assessment of KU’s front court. “We don’t have (many) freshmen bigs. Everybody has knowledge of the game, the game has slowed down for everyone, we all know how each other plays and everything is going to run smoothly and be compatible with each other’s style of play.”

While that comfort level can only help McCormack in his pursuit of becoming a more polished player, the 6-10 power forward/center hybrid is also excited about how his improvement can help his teammates.

“Things are flowing a lot more smoothly for me,” he said. “Plays just kind of develop on their own. Nothing’s forced. And then, since I’ve been here a year, we have the chemistry and I know where players want to be and the style they want to play.”

Our front court is going to be an absolute beast for all of our opponents to handle this year. I don't think we've had this nasty of a front court since possibly the Morris twins and T-Rob were all playing together.

I agree and I think this front court will be significantly more physically imposing than the Morris/Robinson group were, and they were not cupcakes!

Freshman to freshman or the best season from either team? The 2012 team would be hard to match as no one stays for 3 years anymore.

Yeah I've been trying to think of a KU team with a stronger frontcourt. Remember T-Rob was only a freshman at the time he played with Morris Twins. So D-Mac is a year ahead of that pace. And Silvio, with Final 4 experience plus an extra year of development... Goes without saying, Dok is a beast!! I think this frontcourt edges them out....

Gotta love hearing coach Self say we have no Freshman Bigs with respect to our list of recruits. I hope that means Enaruna and Wilson are Small Forwards and will never start them at the 4 or 5 spots just because they are tall and or unless forced by team injuries or fouls.

Both Enaruna and Wilson are tweeners, too small to play PF, tall and unknown how their size and skills will translate at the 3 at this level. It's pretty stupid to have to say, but for the most part Scouts want to watch players play the position they will play in the NBA. It's hard to evaluate a "Perry Ellis" playing center when he will have to play the 3 spot in the NBA and KU is not doing any player any good outside of their NBA position. So KU needs to play them both at the 3.

As harsh as the truth is, KU's starting lineup is not recruited to get a degree, KU recruits these kids to win National Championships, earn the school money, while preparing them for the NBA. I would rather watch KU start a 3 Star Center at their position than to watch a 4 to 5 star player forced to be out of position. So, I hope to never see another "Ellis, Bragg, or DeSousa" as KU's starting Center ever again. I can't wait to see Dok, Mac, and Sou rotate in the middle this year and I actually hope that Sou never really plays in the 5 spot.

Redshirts: To guess, Lightfoot, and McBride should reshirt, Enaruna would be my third guess. but, Garrett should backup Dotson at PG. Garrett is considered a PG, should play PG, or should transfer where he can play PG......he is not a 3 point SG.

Isn't McBride considered heir apparent at PG? If so, I think he needs a year playing next to or subbing for Devon so he's ready to take over full-time PG duties. I fully expect we'll lose Devon after this season unless he has a sub-par season for some reason. Or serious injuries.

Coach Self didn’t say we have no bigs in this class. That was David.

My guess is that the ability of our bigs to score points together will not determine their time on the floor. It will be their ability to defend the other not so big bigs of our opponents. That was the limiting factor on Withey’s time when paired with TRob. It ultimately was our demise against Villanova 2 years ago as well.

This may be our most powerful front court with ‘Dok, De Sousa, McCormack all supplemented by the always tough Lightfoot (if he doesn’t redshirt). I’m particularly excited because now our bigs can actually anchor the team, rather than Lawson playing his finesse game.

Jalen Wilson appears to be the superior basketball athlete to Enaruna, and with Braun rotating in the front court behind Dotson/Garrett/McBride and Lightfoot supporting the Dok/De Sousa/McCormack trio, I just don’t see Enaruna getting any playing time. I think he’s the most likely candidate to redshirt.

Yet another Kansas basketball roster blessed/spoiled with talent. Can we start the season yet?!?!

Yet ANOTHER reason we need to stop recruiting so many OAD's. VERY few kids ever come close to showing their potential freshman year. They have to adjust to the game being faster, playing against bigger and better opponents and it takes at least a year or two (as Mac mentioned) to really get comfortable playing with your teammates. And even if you're lucky enough to land a top 10 recruit..how often do they lead their team to a championship...case in point, Zion...Duke didn't even make the Final Four!!

Mack and Silvio are going to put on a hi-lo show this coming season. Can’t wait!