Kansas women’s basketball coach Brandon Schneider has been waiting for his roster to be made up entirely of players he recruited for five seasons.

But the reason that’s so important to KU’s fifth-year coach who last weekend won the 450th game of his coaching career (39 of them at KU) goes beyond plugging the right pieces into the right system.

“Now that we’ve recruited all of them, I can coach them really hard,” Schneider recently told the Journal-World. “Because I have a relationship with them. And I think that makes a difference.” 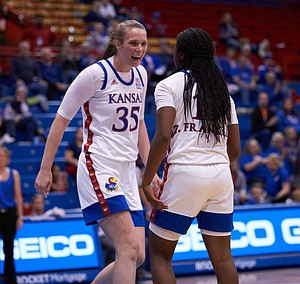 Off to a 10-0 start and closing in on the beginning of Big 12 Conference play — Jan. 4 at Oklahoma State — Schneider’s young Jayhawks have shown rapid improvement from game to game and week to week.

Ask any of them why the Jayhawks have been so successful thus far and each will point to the same key component.

“They’re close,” Schneider explained. “These guys all like each other.”

Sophomore guard Aniya Thomas, who appeared in 29 games and made 11 starts a season ago as a freshman, said that bond was an important part of the Jayhawks’ ability to pull out a couple of games that it looked like they might not win.

One recent example of this team’s resolve clearly illustrates the importance of chemistry.

Against Saint Mary’s, in a game the Jayhawks eventually won 86-81, KU was down by five with 74 seconds to play and closed the game on a 12-2 run.

“We were in situations that this particular group hadn’t been in,” Schneider noted. “In must-execute situations and we found a way to get it done. To see our young team do that was a positive.”

Thomas pointed to that game as the one, above all others, that led her and her teammates to believe that this group had an element of toughness that teams she had been on in the past just did not.

“We just kept our poise and came back,” she said matter-of-factly. “We just listened to Brandon’s instructions and just followed what he said.”

Poise, for both the players and the coaches, has been a key ingredient of this fast start, as well. 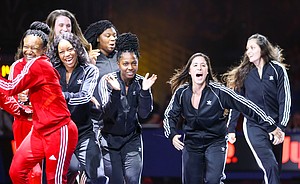 Members of the Kansas women's basketball team run off the court after performing a group dance during Late Night in the Phog on Friday, Oct. 4, 2019 at Allen Fieldhouse.

After losing freshman and prized recruit Chandler Prater and center Brittany Franklin, one of the top returners from last year’s team, to a season-ending injuries before things even got going, the adversity hit early for Schneider’s fifth KU team. But instead of using the injuries as excuses for a slow start, the team rallied and used its chemistry to rip off 10 wins in a row to open the season.

“Even though we are really young, I just think we got a lot of chemistry that just came really quick,” said Prater, noting that even though she’s injured she still believes she’s a key part of this team. “We all get along with each other and I feel like that’s something that this program really needed, for the players to build a bond, not only with ourselves, but with the coaches. When you have that click it’s just so much easier to play basketball.”

KU’s early run of success, which featured an in-season tournament title in Florida in November and a win over Florida in the Big 12-SEC Challenge — won by the Big 12, 8-2 — has put the Jayhawks on the national radar.

Schneider’s squad received votes in each of the past two Associated Press Top 25 polls and is heading toward the non-conference finale against Wofford on Dec. 30 with all the confidence in the world.

But it’s not just one element of their execution that has Schneider believing the hot start is sustainable.

“We’ve got six players averaging double figures,” he said of Thomas (12.9 points per game), Brooklyn Mitchell (12.4), Zakiyah Franklin (12), Holly Kersgieter (10.9), Mariane De Carvalho (10.8) and Tina Stephens (10.5). “We don’t have a star, so I think they’re all understanding that we’re going to have to play really connected on both ends. We’re not going to out-talent anybody and for us to have success we’re going to have to out-tune people.”

And it’s taking this Kansas team in the exact direction it wants the program to go.

“We’re closer every day to building the identity that this group wants,” Schneider said. “From a confidence perspective, the Florida trip was big for us. Obviously the SEC opponent here was big, and then Saint Mary’s is good and they’re going to probably compete with Gonzaga to win the West Coast Conference. So those were quality wins that I think our young team can definitely use to validate their progress.

“We’re a long ways from our goals, but we’re obviously pleased with where we are as of (now).”

This team is young, but so far this season, they've been the more poised team on the floor at game's end. Am enjoying being a fan!

I didn’t realize that one of last years main cogs and their prized recruit have been lost for the season.....before it even began. Think how much better they could be. Hopefully they get medical redshirts. This team might actually be really competitive in the next couple of years.

Why on Earth do you folks crop your photos so horribly? It's insane. Please respect the art, photojournalism, photographers, and viewers. This is the internet where you are not constrained by limited pages and dimensions like in print, so just display the photos as the photographer or photo editor originally cropped them, every time. I can't believe how bad the crops within articles and on the front pages are STILL, after a decade or so of it. KUsports.com's treatment of photos looks like AOL circa 1997. A simple fix to this old mistake would instantly make a much better product.