The way Kansas football coach Les Miles described it, there wasn’t much for the Jayhawks “to smile about” on their final Saturday of the season.

Miles did allow for a slight departure from that line of thinking when it came to KU’s star running back. The Jayhawks weren’t able to accomplish many of their week’s goals during a one-sided loss to Baylor. But they did set up Pooka Williams Jr. for some relative success, as the sophomore rusher topped 100 yards for the fifth time in 2019.

“We were more competitive toward the end,” Williams said of a couple of longer drives late on a day when the offense mostly struggled, with six three-and-outs, six punts, two turnovers on downs and four interceptions.

“Once we saw there was no coming back,” Williams said, “we just got more competitive and really were trying to get our rushing goals and more stats for each other.”

Four of Williams’ eight carries in the first half versus BU gained less than 1 yard. In the second half, the 5-foot-10, 170-pound running back from Louisiana found more steady success.

“Just seeing more holes and gaps, and really just running physical,” he said of closing the game out on a better note.

An All-Big 12 first-team running back as a true freshman in 2018, Williams’ numbers dipped a little during his second season with the Jayhawks (3-9 overall, 1-8 Big 12). During his first college season, Williams contributed 1,125 rushing yards, 289 receiving yards and scored nine total TDs. As a sophomore, he finished with 1,061 rushing yards, 214 receiving yards and five total TDs. He averaged 5.2 yards per carry in 2019, after going for 7.0 yards a rush as a freshman. 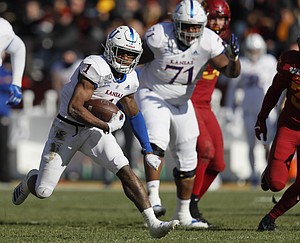 Williams thinks opposing coaches and players found ways to defend him differently this time around.

“I think they did, honestly, just knowing how I can reverse field any moment,” Williams said. “They just stayed home, and I couldn’t reverse field.”

Even so, with his production over the past few months, Williams became only the second player in KU history to accumulate at least 2,000 career rushing yards during the first two seasons of his college career. You may have heard of the other: Gale Sayers. The “Kansas Comet” ran for 1,125 in 1962 and 917 in 1963.

Providing a self-evaluation of his sophomore season shortly after it concluded, Williams maintained he’s the same player he was as a freshman, but also said he “lost a step or two.”

He plans to recover those in the months ahead.

Williams said he and his teammates left the season regretful because they wanted to close it out with something meaningful for everyone on the roster.

“It hurt me deeply,” Williams said of KU’s 61-6 loss to Baylor, “because I told Carter (Stanley) we were going to send him out with a win. We didn’t compete as much as we should’ve to send those seniors off with a victory.”

Pooka's 2020 season will be very interesting to watch. After 2020, he will be eligible for the NFL Draft. If he has a big 2020 season, Jayhawk fans possibly could be seeing the last of the Pooka Williams Jayhawk career.

Pooka is fun to watch. I suspect the silver lining in the blowout loss to BU is that the returning guys will work even harder this off-season. I'm still excited about KU football and looking forward to seeing even more improvement next year.

I enjoy Pooka. Next year with strong support he will be better. I look forward to next year.

Worth noting is that Gale got his 2k yds in two 10 game seasons.

It’s a shame we lost Herbert. There were some big plays that came with both in the backfield so that they couldn’t key on either one.

It's a shame he decided to walk out on this teammates.

Steve - There was obviously something going on, but like we’ve seen many times there’s more to the story than just the obvious.

I feel sorry for Pooka. If he had even a half decent O-line, his rushing total would have been over 3,000 yards.