The starting quarterback job isn’t the only one on the Kansas football team that remains unresolved as the Jayhawks go through game week preparations for their season opener.

The first published depth chart of the Les Miles era arrived Monday, and it lists seven first string spots up for grabs ahead of KU’s Saturday debut versus Indiana State.

While the QB battle between junior Thomas MacVittie and senior Carter Stanley has received the most attention throughout the preseason, five other starting spots on the offensive two deep came with two names separated by an “or” instead of one definitive starter.

As one might expect, a few of those inconclusive spots exist up front, where Miles and offensive line coach Luke Meadows had already made clear their plans to rotate players.

Senior left tackle Hakeem Adeniji and junior left guard Malik Clark are the only absolute O-line starters on the depth chart, while KU has options at each of the other three spots: junior Api Mane or senior Andru Tovi at center; junior Chris Hughes or junior Adagio Lopeti at right guard; and senior Kevin Feder or senior Clyde McCauley III at right tackle.

“I have to be honest with you, I think our line is going to get comfortable in that spot,” Miles said during his Monday press conference of the three positions to the right of Adeniji and Clark. “I think those guys are talented and they’ll play a lot of football.”

Besides QB, the depth chart also vacillates at two other spots in the backfield. With sophomore running back Pooka Williams Jr. suspended for the opener after his offseason domestic battery charge, KU will start either senior Khalil Herbert or junior Dom Williams.

The only other position where Miles and his staff remain in evaluation mode is at place kicker. As the head coach and special teams coordinator Mike Ekeler said previously, the competition involves freshman Jacob Borcila and junior Liam Jones.

“It’s very close,” Miles said. “I would think in this season it’s likely that both could play. Liam Jones is hot as a firecracker, just knocking the tar out of the ball. And we’re getting great specialist play.”

Outside of the ambiguous spots for the offense, joining Adeniji and Clark as conclusive starters on the depth chart are receivers Stephon Robinson, Daylon Charlot and Andrew Parchment, as well as tight end Jack Luavasa.

While some uncertainty existed about who would start at various spots up front before the depth chart was released, it seemed most of the No. 1 positions in the secondary were more fixed.

The biggest surprise on the published depth chart came at one of the cornerback spots, where sophomore Corione Harris was listed as a reserve and junior Kyle Mayberry appeared on top of the two deep. 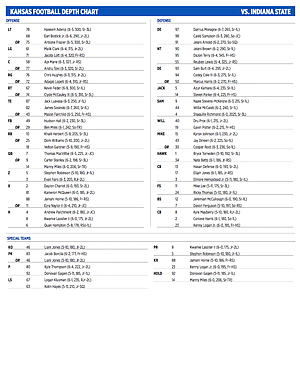 Harris started 11 games for KU as a true freshman in 2018, while Mayberry took a redshirt season. Miles didn’t provide a lot of details when asked what went into the decision.

“I think Kyle has had a really good camp, OK,” Miles said. “I think Corione Harris is also going to play a lot of football.”

Elsewhere in the secondary, senior Hasan Defense also is a first-string cornerback, with senior Mike Lee at free safety and senior Jeremiah McCullough at back safety. Though he has been listed at safety on the roster, senior Bryce Torneden will start at the “Hawk” spot, as almost a hybrid outside linebacker and defensive back.

On the defensive line, senior Darrius Moragne and junior Sam Burt are listed as first-team defensive ends, along with senior Jelani Brown at nose tackle.

The starting “Jack” position, where KU will play its primary pass rusher, belongs to senior Azur Kamara. At its three linebacker starting spots, KU lists senior Najee Stevens-McKenzie as the strong side outside linebacker, junior Kyron Johnson in the middle and junior Dru Prox as the weak side inside linebacker.

On special teams, Jones will continue to handle kickoffs, junior Kyle Thompson is the starting punter and junior Logan Klusman is the top long snapper.

It appears junior Kwamie Lassiter II will be the primary punt returner, with Robinson listed as another option.

Les Miles speaks to media ahead of season opener by KUsports.com

Any Malcolm Lee news? Was thinking he was going to contribute this year and potentially significantly. He had the dui arrest earlier this summer but haven’t seen a follow up. Was expecting him to get a suspension and maybe that’s why he’s not listed here at all.

from the other article: "He’s not on the depth chart at this moment,” Miles said Monday. “When he’s eligible, we’ll certainly include him.” He is scheduled to appear in municipal court on Tuesday for a plea hearing.

Never heard of the Jack or Hawk positions until this. Benton, thanks for explaining what they are.