Although Late Night and the season opener remain in the distance, the start of another school year marks the unofficial beginning of a new journey for the Kansas men’s basketball program.

And what a journey it’s been already.

Just four months ago, as Bill Self and his coaching staff sat in the unusual spot of potentially having as many as five or six scholarships still to hand out, the KU fan base panicked.

No Top 40 prospects in the class of 2019, top targets choosing other programs, and uncertainty surrounding the futures of a few key Jayhawks were enough to sound the alarms.

But those sounds never quite penetrated the walls of the KU basketball offices.

“Panic may be too strong,” said Self, when asked recently by the Journal-World just how worried he was about his roster this spring. “We’ve always figured out a way. People said we were losing kids. Well, you’re losing kids to Duke and Kentucky. I mean, good gosh. They’re not the easiest guys to get when those programs make them priorities as well.”

Little by little the questions mounted and the concerns about the 2019-20 season grew louder. 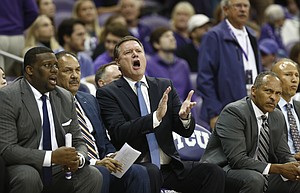 Kansas head coach Bill Self gets at his players from the bench during the second half, Saturday, Jan. 6, 2018 at Schollmaier Arena.

“I lost a lot of sleep, man,” said KU assistant Jerrance Howard. “It was a lot of stressful nights, especially because we, and me personally, put in so much time with Matt (Hurt, who chose Duke).”

Rather than sulk every time a recruiting battle went against them, the KU coaches maintained their composure, trashed the file and moved on as quickly as possible.

There are tiers of targets in every recruiting class, but there is not time to dwell on the negative outcomes.

After missing out on six straight targets, things slowly started to turn in the Jayhawks’ favor.

Three days after Hurt chose Duke and at the exact minute Stanley picked the Blue Devils, KU announced Udoka Azubuike would be back for his senior season.

A month later, KU got positive outcomes from four of its next six key decisions and things started to roll from there.

They might not have been getting good news from Top 10 prospects in the 2019 class, but, in a way, the news they were getting was even better.

A month after Azubuike announced his return, point guard Devon Dotson did the same. Five days before that, Silvio De Sousa’s NCAA suspension was reduced from two years to one, making the junior forward eligible for 2019-20. 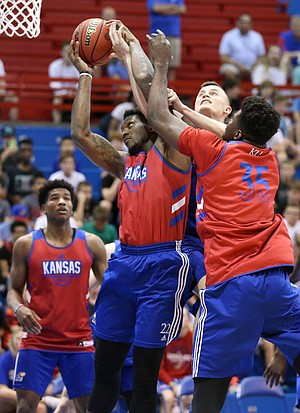 Kansas forward Silvio De Sousa battles for a rebound with Kansas forward Mitch Lightfoot and Kansas center Udoka Azubuike (35) during a scrimmage on Tuesday, June 11, 2019 at Allen Fieldhouse. In back is Kansas guard Ochai Agbaji (30).

“The best players we could ever have signed were Dok and Silvio and Devon,” Self said.

While the good news was pouring in from players he had already coached, the Jayhawks seemed headed for a major coup when Top 5 talent R.J. Hampton reclassified into the 2019 class and appeared to be on his way to signing with the Jayhawks.

“We were going to get R.J. Hampton,” Self said. “And we never even new that (New Zealand) was an option until a media person tipped us off the night before that that could potentially happen. That was new territory. But I’m fine with it. R.J. is a terrific prospect and all of that. But, with Devon coming back, we had a pretty good point guard.”

Although Hampton wound up skipping college altogether to play professionally in New Zealand, his role in this journey was more evidence of what Howard talked about: no matter how many say no and how bad things look, just keep recruiting.

“This past year, we really exhausted Plans A, B and C and we had to go to Plan D or whatever,” Self said. “So we were able to do some things late that didn’t have the impact from a national recruiting (splash) standpoint, but may have more of an impact on us winning, at least initially.”

Those “things” included a batch of late signings. None of them were the Andrew Wiggins-, Josh Jackson-, Dedric Lawson-type pickups of springs past. But they were important. And the signatures came from talented four-star prospects who had other quality options.

Grad transfer Isaiah Moss, who addressed KU’s biggest need (3-point shooting), backed out of a commitment to Arkansas to come to Kansas in early June.

In early July, as the cherry on top, KU landed a commitment from yet-to-report point guard Dajuan Harris, who finished up his academic work this summer and still hopes to join the Jayhawks in time for the 2019-20 season.

Harris, who may be headed toward redshirting his first season, appears to be that luxury depth piece that the Jayhawks don't necessarily need right now but someday figure to be awfully glad they have.

“His whole philosophy is just always recruit because you never know what’s going to happen,” Howard said of his boss’ approach. “That’s what I learned from him a long time ago. It’s never over.”

Added senior Mitch Lightfoot, who has seen Self work his share of magic on and off the court: “There’s a reason coach Self is in the Hall of Fame. He figures stuff out, and look where we’re at now. I think it’s pretty amazing that Coach can do that. What’d we have, like, seven guys on the roster (in early May)? Now we’ve got guys coming back. We’ve got good recruits coming in. We’re excited.”

Self has never shied away from saying that KU being mentioned in the federal investigation into corruption in college basketball recruiting has had an impact on his ability to sign top players in recent months.

But he also doesn’t believe the wild ride that shaped KU’s current roster was in any way detrimental to the Jayhawks’ future.

“I’m excited about where we’re at,” he said. “I like our roster. Time will tell if it’s a roster that can compete at the very highest level, but it’s amazing to me, everybody outside our camp thinks it can. These guys are all going to be good players at Kansas — all of them.”

The whole KU fan base didn’t panic. Many did, but some remembered Coach pulling rabbits out late in the game in the past and didn’t stop believing they would do it again.

It is exciting to see what this season will bring.

I can understand where some would panic. After all, Kansas was coming off a season where they had started out #1 in the country, only to stumble and bumble their way to a 10-loss season and a third place finish in the Big 12, and get bitch-slapped by Auburn in the NCAA Round of 32. What KU fan WOULDN'T be in a bad frame of mind after all that, the twists and turns of the FBI investigation, and the recruiting problems?

Those who remembered that injuries, suspensions, and a player losing their mind were the reasons it didn't go as expected. Before two of those happened we were undefeated, beat a handful of top 15 teams, and were on track to hold onto that #1 ranking or be in the top 5 all season.

For some of us, it is hard to understand why KU would lose any recruit to Kentucky whose arena is named after a former KU player and part-time employee of the Jayhawk cafe and who is currently coached by a former KU grad assistant.

The rabbit is still in the hat. 🎩

AAHHHHH! The spoiled KU fan base. I can still vividly remember being at the tournament in Kansas City back when Roy was still the head coach. We couldn’t get “the monkey” off our backs and there were grumbling about how we needed to get rid of Roy. I was talking with Iowa State fans and they said that they would be more than happy to take him off of our hands. Same is true with Bill. Our 14 straight is nothing short of a miracle. We were due for a down year. And that “down year” was still 25+ wins and keeping the NCAA tournament streak alive. Perspective, it’s all about perspective

Honestly,the panic was 100% justifiable...its 1 thing to be in a recuits top 5 and miss buts another to be the favorite then watch as another program swoops in at the last minute and steals them...this happened 4 times...Hurt, Precious, and Earl..all picked for KU..throw in Stanely choosing NZ...the class turned out solid but it lacked the high impact player KU normally lands

It’s interesting that plenty will comment here that they want the multiyear players over the 1ndone yet some how feel unsatisfied when it happens.

As the article says we got by far the best recruiting class when Devon, Dok, and De Sousa all came back for another year.

It appears players choosing no college will be a factor in the future. Duke with their reputation and coach are difficult to beat. Kentucky seems to get what they want. So the challenge will be to select and sign those that aren't top prospects for those 2 schools. Maybe that doesn't sound smart but reality needs to be considered.

1] Hello everyone....long time, no post. It's going to be an interesting year, finally, even before Late Night, thanks to Les and his boys.

2] I'd say the over/under on BBall red shirts this season will be two...which two is the question. It may seem odd but I almost wish Mitch would be one of them.

3] Kansas will shock everyone, finish 6-6 and go to a bowl!! At least that's what Max told me in a dream last night.

4] It would be fun to compare Dev/Dok/De Sousa as a recruiting class to the other elite school classes. Better yet, have a three on three tournament and see who would win. I think I know the answer to that!!

5] HELLO SHERI !! You see, Sheri is my sister-in-law, is a Cyclone Alum and is die hard all things ISU. This year I found out she reads all the Big 12 fan sites. Now that I know this maybe I better not say anything bad about Iowa State.........NAWWWW!!!!!

6] My pick for stealth surprise assassin of the year is Mr. Braun. Something about him reminds me of John Havlicek, a pure killer on the court.

7] Just for hoots, I hope that at some point in the season, Coach Self puts Dok, Big Mac and Silvio on the court at the same time. Coach Miles would be jealous!! :)

All perspective. But I can tell you, I have full confidence in Coach Self. Always have, always will. It would take quite a bit more than getting a #4 seed in the tourney and winning 25+ game without Doke, De Sousa and a checked out Vick for me to lose faith

Bill Self is a hall of fame coach and he knows what it takes. Yeah we didn't get every amazing recruit, but we got some pretty good players and a transfer that's ready to step right in and make us lethal from all spots on the court.

The one thing I don't usually like is being preseason #1. For two reasons:

1) Unnecessary pressure
2) Basically no preseason #1 ranked has won the national title( since UNC in 2009) in quite some time. So being preseason ranked #1 isn't all it's cracked up to be. Let Michigan State have it.