Dedric Lawson, the paint is yours.

As inviting as that sounds for an aspiring All-American, you’ll have to forgive this Kansas basketball team’s best all-around player for not diving head first into his new role as the Jayhawks’ pseudo center.

It took Lawson, a redshirt junior forward but a first-year KU contributor, a little time to feel things out — just like when he’s methodically working past his defender to get to the paint, relying on his mind and repetitions rather than his athleticism.

Fortunately for No. 1-ranked Kansas, that process only lasted a game for Lawson. A week after encountering some stumbles, albeit in a double-double performance, against New Mexico State, Lawson’s old-man game proved effective throughout a 74-71 Jayhawks victory over Villanova inside Allen Fieldhouse. 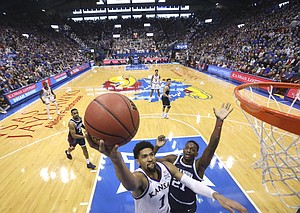 In his second game manning the 5-spot on the floor instead of injured junior center and back-to-the-basket natural Udoka Azubuike, Lawson learned from the mistakes he made in his first outing as the lone big in a four-guard lineup.

“We went over it a lot this week,” Lawson said of the practices leading up to his season-high 28 points against Villanova. “So just being able to attack, being able to know where I’m going to attack from without Udoka on the floor and things like that.”

The game reps versus NMSU followed up by countless more during practices led to a more assertive mindset from Lawson, who scored at least 20 points for the sixth consecutive game, putting him one game behind Frank Mason III’s run of seven in a row for the most in the Bill Self era.

The skilled 6-foot-9 junior from Memphis scored 16 points in the paint not with thunderous Azubuike-like jams, but by using his footwork and feel to exploit Villanova’s skilled and prepared defenders whenever he could.

As long as Azubuike’s out — and Self indicated after KU improved to 9-0 that will likely be until January at the earliest — the Jayhawks can run their offense through Lawson and expect successful results instead of the fumbles and the sometimes antsy takes that led to an off night against NMSU.

But don’t count Self among those who look at KU’s lineup without Azubuike and see it as an advantage. And, realistically, fewer of those opinions are probably floating out there after Lawson and Lagerald Vick (29 points) had to carry the offense against No. 17 Villanova (8-4). 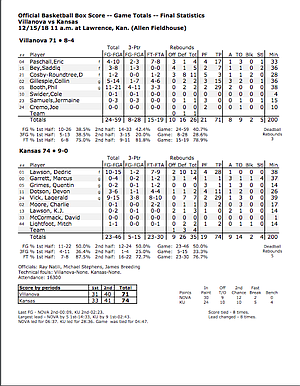 If Lawson becoming KU’s new primary big man — David McCormack played only one minute off the bench Saturday and Mitch Lightfoot logged 14 — comes with any type of benefit, Self thinks it shows up in his team’s head space.

“You never think that you’re shorthanded going into a game mentally. I don’t think there’s one time where our guys thought, ‘Well, we need Dok.’ Now as coaches we know we do,” Self clarified, “but the guys just always seem to adjust.”

If Lawson (12 rebounds) had any critiques of his sixth double-double of the season, it was that he went 7 for 9 at the foul line when he expected to go 9 for 9.

KU only led by three points when he missed the first of two attempts with 0:17 to play and Villanova making a late charge.

“I don’t know what happened. One of my free throws, it came off wrong. I knew when I shot it I had missed it. I wanted to get back up there and knock them down the next time,” Lawson said.

That he did. Not just by hitting the second. Lawson also was the man who had to seal the game with 0:06 left to play. And he connected on a pair of free throws to push the lead from 72-70 to 74-70.

“I’ve never been the most athletic guy on the team, so I always worked on other skill sets, like shooting, to draw more value to my game,” Lawson said of being a big man who can be relied upon to not only catch the ball against a press but also go knock down free throws.

Now averaging team-bests 20.1 points, 10.8 rebounds and 2.7 assists through nine games, in spite of a scoreless outing versus Vermont in November, Lawson is finally comfortable as KU’s focal point.

Self didn’t expect Lawson would have to adjust “at all” to his new role. But now that the versatile, intuitive forward has, the hard part may come when he has to re-adjust in a few weeks to Azubuike’s return.

But Lawson is so unselfish he’ll probably just see that as an opportunity to improve his assist numbers, with entry passes and lobs that lead to Azubuike jump-hooks, layups and dunks.

Lawson can do it all for KU. And now he knows it because he has experienced it.

Dedric is the man! double doubles are not easy to get at all and Dedric does it all the time!

Where would we be the last two games if not for Dedric? Not in a good place. He is made himself vital to the Jayhawks' success!

Dedric can score in and out, taking short jumpers, he's all-around skillful shooter with high BB IQ. That's what makes him special. We can see that corner 3pt. He came out of his post, getting wide open to the wing and made that 3pt shot. What an awesome play. Another great play was the screen and roll. I hope we continue these kind of offense, and not just use Lawson as our main offense.

It'll be interesting to see him against the Sun Devil. We lost last year miserably without Lawson. Another revenge is on the way.

There aren't many (?any?) guys that will lead their team in pts, R, and assists.

Just cranking out the POTYs.

I was really concerned that if he had to play the 5 while Dok is out, it would limit his game and get him in foul trouble trying to defend a bigger guy, but man he's been the mainstay of this team and aside from Vick, the only reason they're still undefeated. ASU gonna be tough next weekend, that game should be a measuring stick from Mich St. or Tennessee to now, and how we'll handle the Big12. Looking forward to a #15thStraight #rockchalk

Oak Hill Academy has been on the KU radar the last three recruiting cycles First it was Billy Preston player from Oak Hill with potential one and done talent Mcdonalds All-american …..who never played a meaningful game for the Jayhawks amid the pay for play allegations Next it was the signing of big man David McCormack who has yet to see any meaningful playing time . Now yesterday another big man 6-10 280 Kofi Cockburn cut his list to 5 and Kansas made the cut along with Pittsburg Illinois UConn and St Johns Given the fact that Dok probably will enter the draft getting another big is on the wish list . If im Bill Self knowing that another big has interest in your program do you play McCormack more …..remember McCormack was highly regarded coming out of Oak Hill but even with the injury to Dok Coach Self hasn't played him .does that affect David mindset will that affect Kofi's decision not to come to Kansas …..I don't know if David and Kofi are friends or not ...We are competing against …..Pittsburg Illinois UConn and St johns not Duke Kentucky N. Carolina or Arizona for his services.

On the Matthew Hurt front he recently made his official visit to Kentucky ….yesterday he went to watch UNC play Gonzaga …...but he wont visit Kansas until the spring at which time he will make his decision

Now heres what Hurt said he looks for in his recruitment 1 How a school prepares for an opponent 2 What they do before a game 3 What they do after a game 4 Shoot arounds 5 What an actual game looks like He makes his decision in April So he plans to come to a Big 12 game in the spring ???? JRE a lock …..gone to Nova Nnjai good visit ….gone to Arizona Chandler Lawson lock. Self suggested he wait ….gone to Oregon Now Mathew Hurt thought to be a Jayhawk is still up in the air