For KU newcomers, certain steps must be taken before impact can be made

Kansas freshman forward Billy Preston throws down a one-handed dunk in an exhibition game against Pittsburg State on Tuesday at Allen Fieldhouse.

It was the perfect illustration of an age-old fact and it happened all in the same game.

Last Tuesday, during KU’s 100-54, exhibition victory over Pittsburg State at Allen Fieldhouse, freshman forward Billy Preston flashed his enormous potential by charging down the floor after catching a pass just across mid-court, taking a couple of dribbles, crossing over an opponent and hammering a dunk that ignited the arena and sent Preston into a fiery celebration.

The bucket was one of five shots Preston hit on a night when he attempted just five. But, by game’s end, his hot shooting had been somewhat overshadowed by the eight minutes and four fouls that jumped off of his stat line.

Such is life when adjusting to Bill Self’s way of basketball. And for freshmen Preston and Marcus Garrett, along with transfers Sam Cunliffe, Dedric and K.J. Lawson and Charlie Moore, the challenge of learning the system and being comfortable enough with it to actually play is not something that can be tackled overnight.

“The thing is, those guys were the best players on their team for so long and everybody just goes, ‘You get it and you go make a play,’” KU assistant Kurtis Townsend recently told the Journal-World. “But that’s not how you play. So they need to readjust how they learn to play basketball.” 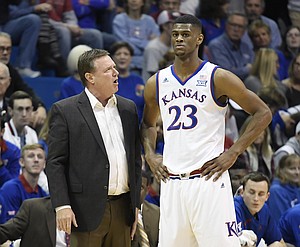 Kansas basketball coach Bill Self talks with freshman forward Billy Preston in the first half of Tuesday's exhibition game against Pittsburg State at Allen Fieldhouse.

Emphasizing defense and hustle plays over highlights and heroics goes a long way with Self and his coaching staff. But programming the minds of these young players to both think and operate that way is not easy.

With very few exceptions — Josh Jackson in 2016-17 being one of them — Townsend said the KU coaches routinely target a particular time each season to determine how much a newcomer will help them.

“I would say by the start of Big 12 play of their first year,” Townsend said. “That’s when you can go, ‘OK, they’re starting to figure it out.’ They have about 13-14 games under their belt and you go, ‘OK, they know what they’re doing.’”

“Then it could take them another year before they figure it out,” Townsend added. “Some guys take longer than others.”

Conventional thinking might lead one to believe transfers like Cunliffe, the Lawson brothers and Moore, have a leg up on most incoming freshmen because they have played college basketball.

But Townsend said even those guys, and others like them in the past, are forced to drop old habits and learn new ones, which also takes time.

Consider Cunliffe as a prime example. He transferred to KU at the end of the first semester last winter and was with the Jayhawks, practicing, working out and watching film on an almost-daily basis from January on. Even with that, it was not until late May that Townsend said Cunliffe was “starting to understand.”

Adding a full offseason and the first semester of the current season to his learning curve only figures to help Cunliffe by the time he’s eligible again in December, much in the way that observing for entire year after transferring from Mississippi State helped Malik Newman.

“Sitting out a year and practicing with the team, you’re light years ahead of guys who are just coming in,” said Townsend before adding of Newman: “He gets it. He’s there. And I wouldn’t say he was there all along. He was starting to get there by January. But then, after he was there, he still practiced for another six months.”

Those three players sitting out have that kind of time and, like Newman before them, they plan to take advantage of it.

Preston does not. He’s playing now. And because of KU's lack of depth in the front court, his role is an important one.

Whether that accelerates his transition or makes it harder remains to be seen. But put Self in Camp Optimism.

“I think his most consistent thing that he does is that he's inconsistent,” Self said of Preston last month. “I mean, he’ll have one great day and then one day that’s not quite as good. But he’s actually gaining on it. I mean, it’s not from an attitude or effort standpoint, it’s just sometimes the motor doesn't always run like it should. A lot of people equate that to effort. I equate it more to habits. I think that he could be one of the better freshmen we've had, from a talent standpoint, if he’s at that peak ceiling where the motor runs and he’s playing to his athleticism and playing inside-out rather than just playing outside. There are a lot of things that he needs to improve on, but you can’t deny his talent. He’s a very talented kid.”

Preston and the Jayhawks will run through their final tune-up for the 2017-18 regular season at 7 p.m. Tuesday at Allen Fieldhouse, where they will host Fort Hays State in this season's exhibition finale.

• KUSPORTS.COM QUIZ: Test your knowledge of the history of Allen Fieldhouse and enter to win a $25 Visa gift card.

I already miss Josh Jackson. Talk about getting it. He could offer a course in how to make yourself great. The biggest problem with the OAD epidemic is that guys like Josh aren't around to model, to teach and to lead.

It didn't hurt that he was a year or two older than most incoming Freshmen, either.

The flip side of this article is other teams need contributions from their newcomers too. It all comes down to which newcomers will play to potential and hype.

My eye is on Graham. I hope he produces as we all know he is capable. I am impressed with Vick. So far, he is my most improved. Udunka needs to play up to his strengths and pick up where he left off from last year. If he does not get off to a good start, it will be a long season inside. Svi seems to have hit a ceiling. I have huge hopes for Newman.

I hope Cunliffe can take advantage of this semester out and make a big impact in the second half of the season.

We can give Garrett time. He seems to have the ability. He like Graham will need to wait for his time. He is a little passive, but hopefully he is playing to his strengths.

I think Garrett may surprise the most. He is one of those kids who just gets how the game is played. He will do everything, pass, score a bit, defend well and rebound. He will play some valuable minutes off the bench. Think Travis Relaford.

I've been impressed with Billy Preston. He hasn't had a breakout game as of yet but he has certainly flashed just how good he can be. If he can get Josh Jackson's meanness while on the court he can become something special.