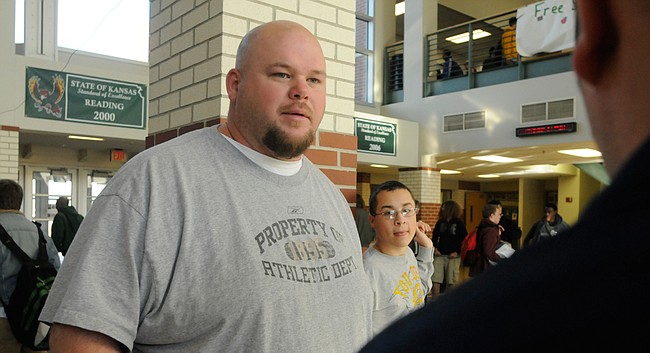 In this file photo from 2008, Keith Loneker Sr., a former University of Kansas football standout, works as a substitute teacher at Free State High School.

Loneker, whose son Keith Loneker Jr., is a current linebacker for the KU football team, has been actively involved both with his alma mater and Lawrence's youth athletics scene throughout most of his adult life and was beloved by athletes and coaches at both Lawrence High and Free State.

In addition to his broad and successful football career, Loneker starred in a handful of Hollywood films, including Superbad, which developed a wild cult following, Lakeview Terrace, with Samuel L. Jackson, and Leatherheads, a football movie starring George Clooney.

He also was actively involved in the independent film scene and dabbled with music.

Loneker, who turned 46 on Wednesday and was a substitute teacher in the Lawrence School District, fought his battle with cancer since at least last December and did so with the kind of positive attitude and spirit he was known to have throughout his life.

After starring at KU from 1989-92 — a stint that include all-Big 8 honors during his final season in crimson and blue and a trip to the 1992 Aloha Bowl, Loneker joined the Los Angeles/St. Louis Rams and played in 19 games, including five starts, with the franchise from 1993-95.

Rest In Peace to my hero, warrior and idol. My father has passed this morning and put up a hell of a fight. Appreciate the love.

I remember watching Superbad awhile back and seeing him and thinking "this guy looks really familiar." Well there it is, he was a KU football player. I also saw him a few times at the Ranch when it was still up and running. Very sad news though.

What a huge, huge loss. A first-class guy in every way.

Sorry for your loss. He seemed like a great guy.

I remember him from Out of Sight with George Clooney and Jennifer Lopez (as well as from KU football of course). My condolences to the Loneker family.

I've known Lonny since his playing days when he would come into The Jayhawk Cafe w Chris Maumalanga all the time. Extremely nice guy and a true Jayhawk. He and I had a chance to talk some over the last 6-8 months on FB. I knew he was sick but didn't know how bad it really was. Super talented on the field and off - Rest easy my friend!

So sad to hear this. Condolences to all family and friends. I watched him play, loved his attitude and truly appreciated his commitment to Jayhawk football. Rest easy big fella'.

So young, so sad. My thoughts are with the Loneker family.

Sad. My heart goes out to Keith and family.

RIP my Friend. You will be sorely missed...I have nothing else to say other than it was a privilege to get to know you and call you my Friend. :(