With actual college football games less than two months away, preseason awards and watch lists season has arrived, and players at the University of Kansas aren’t being left out.

The Big 12’s returning leader in not only sacks (10) and tackles for loss (20), but also forced fumbles (three) from the 2016 season, Armstrong finished his sophomore year as a consensus all-conference first-teamer, helping the Houston native become the face of head coach David Beaty’s rebuilding program.

The 6-foot-4, 246-pound defensive lineman, who also recovered a pair of fumbles this past fall, racked up more sacks than any KU D-end had in the previous 15 seasons. His name appearing on the Bednarik list comes after Athlon Sports named Armstrong a preseason first-team All-Big 12 talent, as well as a preseason third-team All-American.

The watch list of more than 80 players will be trimmed to a selection of semifinalists, to be announced Oct. 30. Then, on Nov. 20, three finalists will be unveiled. The Bednarik Award winner will be announced at the Home Depot College Football Awards Show, on Dec. 7.

During the course of the past year, KU football players witnessed the devastation caused by cancer when the son of Shanda Hayden, the program’s academic and career adviser, battled undifferentiated sarcoma and died at the age of 7.

Since getting to know Cole Hayden and becoming passionate about fighting childhood cancer, which took Cole’s life, redshirt junior linebacker Joe Dineen has made a point to raise awareness about the disease. The time Dineen has invested on that front earned him a nomination for the 2017 Allstate American Football Coaches Association (AFCA) Good Works Team. 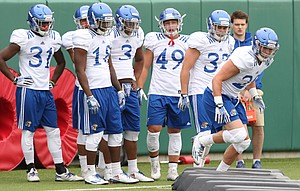 “Once I got involved with helping support Cole and his fight, I learned how few resources were actually dedicated towards finding a cure for childhood cancer,” Dineen said in a KU release, “and it was something I wanted to make sure to dedicate some of my time to."

Dineen visited the Haydens several times while Cole was hospitalized, and has since participated in the Hilltop Hustle 5K, in which all proceeds were donated to Children's Mercy Hospital in honor of Cole, and a local baseball game that raised funds for childhood cancer research.

The Lawrence native and Free State High graduate also helped orchestrate “Cole's Christmas in July," set for Saturday. Dineen and some KU teammates will take toys to Children’s Mercy in honor of Cole.

"I was inspired by his fight and wanted to keep fighting in his name,” Dineen said. “He was a special person to our entire program, and I just want to keep honoring him by playing hard on Saturdays and also working hard to help find a cure."

If you happened to wander past Memorial Stadium recently and noticed KU’s Ring of Honor on the top of the north bowl looked vacant there is no need for alarm.

While some of the most famous names in program history were taken off the wall, a KU spokesperson said it was done so that portion of the stadium could be re-painted during some summer maintenance.

Couple of classy guys. Here is hoping they both have injury free years so their FB accomplishments can bring attention to both KU FB and the causes they support. This staff is doing so much to turn out both good ball players but also good citizens.

Coach Beaty and Co have done a great job of bringing in players with tremendous character. It will continue to pay dividends in terms of team work and a positive climate in the locker room. Unlike Coach Weis's players, Beaty's have been able to keep their noses clean and not bring negative attention to the program (at least as far as we know).

I know the family, so I'm glad he's developed so well. Still, I don't want to paint all of Weiss' recruits with a bad brush.

53 Days and counting -- can't get her soon enough!