It’s not the job of an athlete to care about what others deem possible or impossible in his or her sport. Nor is an athlete required to base personal or team goals solely off of recent history.

All of which is helpful to keep in mind while considering this: football players at the University of Kansas have bowl game aspirations. As in this year.

Not only has KU missed out on such a postseason invite for eight consecutive seasons, the program has failed to win more than three games seven years in a row.

Regardless, Jayhawks this summer already are floating the notion that they want to wipe that streak clean in 2017.

Kansas last was able to feel good about a possible bowl berth in 2009, when the team opened the season 5-0, but went on to lose its final seven games in then-head coach Mark Mangino’s final season.

College football’s defending national champion, Clemson, won as many games last year (14) as the Jayhawks have in the post-Mangino era. Yet, as David Beaty embarks on his third year of a monumental rebuild, his players have bought in on the program’s progress enough to dream big and forget about the 0-12 and 2-10 seasons that preceded the one to come.

In 2016, only 75 teams finished with a record of .500 or better, even though 80 bowl invites were in play. So there’s an outside chance a 5-7 team could sneak into a bowl game. Still, getting to five victories for KU would involve winning at least two Big 12 games — a feat the program hasn’t accomplished since 2008, when the Jayhawks went 8-5 overall, 4-4 in conference and defeated Minnesota in the Insight Bowl. 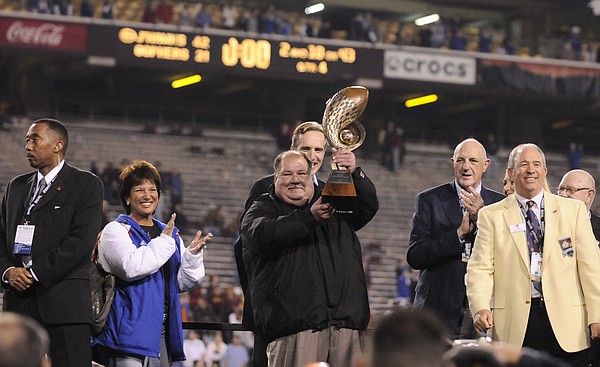 Senior tight end Ben Johnson, in the midst of his fourth year in the program, was asked on Rock Chalk Sports Talk what evidence he would use to support the idea the Jayhawks were ready to make a leap into bowl contention.

“I would just talk all about our mindset. You know, and how Coach (Zac) Woodfin has changed that around here,” Johnson said of the team’s new director of strength and conditioning, who has led the Jayhawks through strenuous summer workouts this offseason.

Obviously it takes much more than that to take a program associated with losing to a bowl game. But that target — however improbable — is one Dineen said the players will openly discuss.

“That’s the motivation,” Dineen said of leading the Jayhawks back to a bowl. “… I mean, we came here to win games. That’s what everyone came here to do and that’s the plan. It’s definitely motivating, because we haven’t had that success. And it’s really time to get going and start winning games for the fans.”

Get to 3-0 and anything is possible. No team in the Big 12 will take us seriously, so if we jump on a sleepwalker in Memorial (like we did with Texas, WVU and almost TCU and Baylor) and surprise one team on the road, then we have the 5 wins.

3-0 is absolutely critical. No reason these guys can't get it done.

But there is something better. At least in the case of Kansas football. I prefer Mark Mangino's philosophy of "sawin' wood". Focus on THE WORK. Prioritize getting BETTER. When the Hawks got a win under MM, rarely was there much focus outside of anything having to do with learning from the last game and preparing for the next one. Hence: "sawin' wood". Discipline. Effort. Improvement. Focus on these and a bowl game might become a by-product.

I'll just put this out there. There is a lot of hype around KU football right now. That's good in the sense that fans and players havent had much to feel good about in recent seasons. But one needs to be careful in allowing hype to overcome reality. Many athletes over time have gotten lost in the spirit of emotion only to not perform to expectation, sometimes for no other reason than they were so emotional. Players should be confident and take that to the field. Do that much. Let the other stuff sort itself out in the end.

As a casual fan my expectation is 3 wins. Keep the positive momentum building and rolling forward towards your goal. This program is (and should be) a freight train, not a sports car.

Is 5 or even 6 wins possible? Sure, but we have to win all the games we should and most of those close games Brett mentioned above that we lost a year ago.

In my humble opinion, success above 3 games is mostly dependent on how good our QBs turn out to be.

I m hoping for another win in conference play.

Like K-State has done over the years, getting your pre-conference wins makes a winning season possible. Hopefully, our offense with new additions such OC and QB will become as competitive as our defense. Special teams have to become more competitive also. I'm still calling for a 6-6 season and a minor bowl game.

Defense wins more games than offense. We haven't had a Defensive Scheme for 6 - 7 yrs. No tackling. Out of position. Incorrect or unclear defensive assignments.

And don't criticize me unless you know all about Knute Rockne and the Defensive assignments in "The Notre Dame Defense."

We were only a few scores away from 5 Ws last year so that much improvement should be very possible.

Love the companion article about Woodfin. The offseason is the foundation for success.

In general it seems that this team was younger than most last year so more room for improvement through natural maturity, especially on the OL. I'm also expecting big splashes from Charlot and at least one of the new RBs. That guy is a difference maker game changer.

The one question in my mind is will we have enough DB pieces to keep from getting picked apart by all the good QBs in our league. It only takes one crack back there and they'll turn it into a gaping hole.

David Beaty must win four games this year in order to justify getting the raise and contract extension. Anything less, and not only does he look bad, but Dr. Zenger will look even more incompetent in the "hiring football coaches" department.

Set a goal and go for it. There is no reason that they should be thinking anything less. RCJGKU!!

Spot on Dirk. Another 20% improvement turns those close losses into victories. I also agree it all hinges on our our quarterback play and that of our offense of line.

JUST BEAT THE WILDKITTIES AND I WOULD BE VERY HAPPY! Like Brett said earlier, starting the season at 3-0 would be crucial and awesome.

QB...QB...QB...the biggest unknown and the most important piece of a winning team.

I have tried to post twice so far. Not sure how posts were lost to netherworld. I will make this short. We must stop the run, greatly reduce turnovers, settle on a quarterback, put together sustained drives and be able to run the ball. Ohio killed us with ground game last year. Central Michigan will be a challenge in passing game. Those two games will be critical to morale, confidence and momentum. CM beat the pokes last year so we better be ready to play. Overall running game of opponents killed us last year. We absolutely must stop the run. Win our nonconference games and this goal can be achieved but it won't be easy.

Anything less than a national championship in football will mean a completely wasted season.

I don't know about defense. Nobody in the Big 12 plays much defense. Last year, K-State was the highest ranked Big 12 team at 51st nationally, including FCS teams. Oklahoma was 82nd, I believe. That surprises me given the athletes they get. The Jayhawks were 109th. Texas Tech was dead last, but they were 1st in offense, and Oklahoma was 2nd. I think you have to outscore people in this conference and hope to get a stop or an interception a couple of times per game. A skilled QB and offensive line are really important. I just have no sense that we are getting any closer yet. This season is critical. The Big 12 is down, so if we don't win 3 games in the conference I don't think this regime will ever get over the top to being competitive. Not saying we should change coaches again, just saying we should not expect more than 3-4 wins total per year consistently. I may be wrong, and I hope I am.