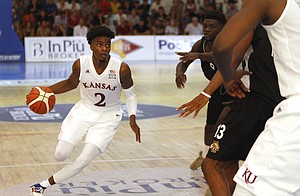 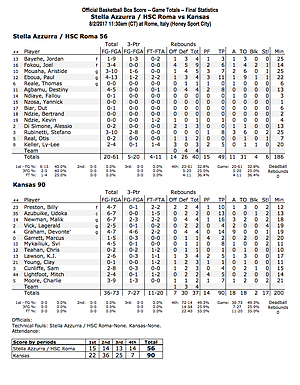 Bill Self thoughts & a few highlights from Game 1 in Italy by KUsports.com

are the games streamed anywhere online?

Highlights, but better than nothing: http://www.kansascity.com/sports/college/big-12/university-of-kansas/article165012232.html - courtesy of Newell.

How bad are the teams they're playing?

All I could find really http://basketball.eurobasket.com/team/Italy/Stella-Azzurra-Roma/5064

I like Dok's aggressiveness, but in the video clips I saw it did look like he was intentionally trying to bring down the goal.
Regardless, it was good to see him throwing his weight around on the court. I can't wait to see him shatter a backboard sometime this year - hopefully at K-State.

Looks like Dok still needs to work on those free throws ;) He's going to get a bunch of attempts, he need to hit more than 20%. Otherwise it looks like he's back to his form.

Why no footage of the dunks?

It's up now... Slow internet and the need for some kind of food today won out temporarily. Enjoy!

Christian Okoye might have to surrender the moniker "Nigerian NIghtmare" for a couple of years...ijs.

I love watching Jayhawk basketball in the summer! Billy Preston looked pretty good out there, but we are sooo thin in the frontcourt. Man it would be nice to find a last second addition, even though there's not much out there. If that kid from WKU could get a waiver....

Quick question...it was mentioned during the broadcast that so many of these European kids start playing professionally at 15/16 years old. Does that not make them ineligible for the NCAA? Does anyone know?

My recollection from the Enis Kanter (?) escapade at uk was that they can be eligible if their earnings are limited to cover their expenses (room, board, travel, ...). IIRC, Kanter was ruled out because he/family got extra money, though that was a long time ago, and the info was just from an e-article or something like that.