Lightfoot planning to ‘put on some weight’

He has spent a lot of time with McCarthy Hall roommate Devonté Graham and also bonded a bit with fellow freshmen Udoka Azubuike and Josh Jackson.

Mitch Lightfoot in his first two weeks on Kansas University’s campus also has made the acquaintance of some key athletic-department personnel.

He was referring, of course, to Andrea Hudy, KU’s highly acclaimed strength coach.

“I’m trying to get stronger, become a better shooter, adjust to the speed and physicality of the game. I always considered myself a stronger guy for high school, a physical guy, but this game is a whole different level. It’s a whole different beast. I’m going to put on some weight. I’m going to put on some muscle and see what I can do,” Lightfoot added.

Lightfoot, Arizona’s 2015-16 Gatorade state boys basketball player of the year, already has some physical attributes that should benefit him at this level, Self said Friday in introducing Lightfoot at his parent/child camp.

“He may be as athletic as any cat we have in our program,” Self said. “We’re fortunate to get him. I think he will be the surprise of our recruiting class, without question.”

Lightfoot, who enters college as ESPN.com’s No. 67-rated player, explained where he obtained all that athleticism.

“My dad was a high jumper in college. He went to Baker, right down the road,” Mitch said of Matt Lightfoot. “I get some athleticism from him.

“My mom played volleyball and basketball at Rockhurst,” he added of Rhonda.

Matt and Rhonda moved the family from Kansas City to Arizona when lifelong KU fan Mitch was 5.

Self in the past also has called Lightfoot “unbelievably competitive” and possessor of a “nasty streak.”

He actually showed some of those traits in last week’s Self campers game. Lightfoot, who was guarding a big down low, moved toward the goal to intercept freshman guard Jackson, who, driving the lane, had slam dunk on his mind. Lightfoot went straight up to impede Jackson’s one-handed dunk try with his right hand, making contact with Jackson’s left shoulder.

Jackson went down hard and had the wind knocked out of him but was not injured on the play.

“Nothing, really,” Lightfoot said, asked what went through his mind on Jackson’s dunk try. “I’m not going to give up any easy dunks. It’s just kind of my mentality. I’m going to play hard all the time. Things happen.”

In limited workouts this month, he has already learned players have to compete ultra hard every day or get left behind.

Lightfoot — he averaged 22.6 points and 11.9 rebounds a game his senior season at Gilbert Christian — likes the idea of having a head coach who will challenge him daily.

“Going back to my freshman year, I had a coach who was real tough. I really flourished under him. I became the player I am today because of him,” Lightfoot said. “I like having a hard coach, somebody that can yell at you but pat you on the back when you are done, give you a hug.” 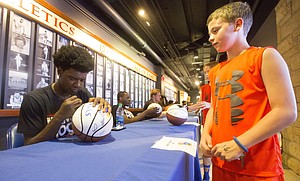 If he needs any emotional support, he can turn to all the family members who live in the Lawrence/KC area.

How many are close by?

“I don’t know if I can count that (high),” Lightfoot said. “There’s a ton. On my (recruiting) visit, maybe 20 relatives were all here. Family is a big part of my life. They’ve got me where I am today. I’m just glad to have them around.”

He was glad to sign for so many young Jayhawk fans Sunday.

“It’s amazing to come back into a place like this. ... where you can go from fan to player is awesome,” Lightfoot said. “All these kids we’re doing autographs for … you’ve been in their shoes before. You know how exciting it is, how daunting it is to get an autograph from a player or even talk to them. I try to make that experience easy for them.”

“Oh, yeah,” he said, asked if he was aware college basketball’s main event is slated for the desert. “Don’t you think that came into my decision picking KU (over Arizona, Utah, St. John’s, Stanford)? I mean, to come back and be in the Final Four would be awesome.”

Svi excels: Svi Mykhailiuk, who is playing for Ukraine’s Under 20 national team this summer, recorded a triple-double with 12 points, 11 rebounds and 11 assists in an exhibition against the U.S. Select Team at the adidas EuroCamp in Italy. He hit four of 11 threes. The Under 20 World championships are July 16-24 in Finland.

Excellent. And next on the list, he needs to plan on figuring out how not to injure our star player during scrimmages. I mean, I know that's rocket-science type stuff and all, but I have full confidence in him that he will figure it out and Josh Jackson will enter the regular season 100 percent healthy

I'm sure he taught Jackson a valuable lesson about going to the basket. There will be much more physical play ahead.

I actually like the fact that he gave Jackson a reality check. There shouldn't be any coddling of any of these guys.

Both kids probably learned a great deal on that play. Mitch don't injure your team and Josh this isn't high school. Should be fun watching these kida.

My thoughts exactly. The way Jackson went down, although he probably wasn't expecting it, makes me wonder if he can play the year and remain healthy. Jackson's also needs to become Hudy's best friend and put on some serious strength.

You're negative comments on Josh Jackson are getting old.

Nowhere near as negative as her comment on Azubuike.....

That's cool Rhonda Lightfoot, his mother, played basketball and volleyball at Rockhurst. I thought those sports were played at the same time? Any idea where she went to HS?

I know Self said he recruited Lightfoot to play some this year but, for my selfish reasons, I hope we can red-shirt him. It would be nice to keep that 4-5 year pipeline going. If he develops into an NBA player and leaves early....all the better.

Thanks LJW for keeping us informed about Mykailiuk. Although I am looking forward to watching Lucas develop further, I'm still not expecting a lot out of Azubuike this year. As a result, Mykailiuk, IMO, will be a key player or the X factor how the team performs. Since he's now up to 6'8", or so, that 'small,' quick and fast line-up (Mason, Graham, Jackson, Mykailiuk, Bragg) won't be so small. If Lightfoot is as athletic as Self states...and he picks up the game...maybe he'll be an asset to the smaller, quicker team, along with Vick.

There is ZERO chance that Self redshirts anyone when he has only ten scholarship players available.

In high school volleyball is in the fall so a lot of kids play both.

It is also played in the fall in college so it is possible for someone to play both.

I expect to see Azubuike quite a bit next season.

Bill Self “We feel Udoka is as good as a big-man prospect as there is in the country, He’s got size, strength and explosiveness"

Also from HCBS “We see him as an impact guy right off the bat with a high ceiling.”

Doesn't sound to me that he will be riding the pine watching Lucas and Coleby. Coleby would have had a significant advantage over Azubuike had he not been injured and was able to practice. But he didn't.

Coleby will recover from his injuries and he will get plenty of PT. Lightfoot, meet the pine...

They don't play the same position....

Do you see Lucas and Coleby on the floor together for long stretches? Coleby and AZ?

I see Bragg as the starter at the 4 but frequently struggling to defend without getting into foul trouble. I think there will be several games in which Coleby plays a lot. Lightfoot? Not so much.

Bragg struggled to defend because he was too weak, not because he lacked the fundamentals to do so.

It's curious that you want to insist that Lightfoot can't earn playing time. You also seem sure that Bragg will play fewer minutes than most project. Those two would seem mutually exclusive as no other player on the Jayhawks roster really plays the 4. Colby is much more of a five. You haven't suggested that Self might play Svi and Jackson together with Mason and Graham for significant time.

Do you really have that little faith in Bragg and Lightfoot or are you just that typical combination of uniformed and negative that most Chicken Littles posses?

This young man is going to be a very good player as some point in his career at KU. It may not be right away, but as a potential 4 year player, he could make a lasting impact.

Like Suzi, I was originally thinking about a "redshirt." However, since Landen, Dwight, and Udoka are post players, our only really experienced "power forward", if we have one, is Carlton Bragg. Mitch would likely be his backup, or if Carlton can't handle the "4" position that well, Mitch may get more minutes, especially as he bulks up under the guidance of Andrea Hudy.

It will be fun to watch all of this evolve.

P. S., I also like the spirit he shows from his Native American heritage. He is a quality young man.