Kansas receiver Rod Coleman pulls in a catch as he falls to the ground against Texas during the second quarter on Saturday, Nov. 2, 2013 at Darrell K. Royal Stadium in Austin, Texas. 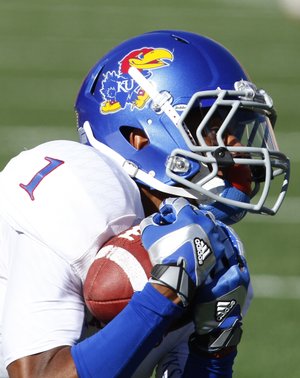 Kansas receiver Rod Coleman pulls in a catch as he falls to the ground against Texas during the second quarter on Saturday, Nov. 2, 2013 at Darrell K. Royal Stadium in Austin, Texas.

While newcomer Nick Harwell continues to impress both in the passing game and in a leadership role, Kansas University’s first six spring football practices have produced another name to watch at wide receiver.

Rodriguez Coleman, a 6-foot-3, 195-pound junior-college transfer who caught eight passes for 208 yards and a touchdown in three starts in 2013, has, according to KU coach Charlie Weis, performed as well as any player on offense so far this spring.

“He’s done a really nice job,” Weis said earlier this week. “He’s a long way from being a polished guy, but he’s big, he’s fast, and catches most everything that’s thrown to him. He gets open.”

The reasons for Coleman’s fast start to his first spring in Lawrence are many and include the approach of first-year wide receivers coach Eric Kiesau and the impact of KU’s new offense.

“Eric is doing a really nice job with fundamentals and techniques and route definition,” Weis said. “So that’s been improving steadily with these guys.”

During the offseason, Coleman, a junior, gained an extra year of eligibility after learning he had been granted a medical red-shirt for his first season at Garden City Community College. Asked if he thought the extra time gave Coleman a lift and was the reason for his strong spring, Weis brought it back to simple football.

“I think the fact that we’re throwing to him a lot has given him some extra energy,” Weis said. “When you line up, the most attention goes to Harwell first and Tony (Pierson) second. When Coleman is the isolated guy, he’s (facing) a lot of one-on-one (coverage). He’ll get a lot of one-on-one. If you don’t have anyone that’s getting open on the single-receiver side, you’ve got a problem. He’s been getting open, so that’s a positive.”

Weis did not reveal details of his team’s spring depth chart but did say the players have a pretty clear view of where they stand.

Weis and offensive-line coach John Reagan said earlier this week they had eight guys on the offensive line about whom they felt pretty good at this point in spring drills.

That’s not the end goal, of course, since they would like to have a solid two-deep at all five line spots established before heading into the season. But given that the O-line is one of the questions surrounding this team and that they’ve only had a handful of practices to work in the new offense, both coaches seemed pleased with the progress up front.

“I’m not discouraged at all,” Reagan said. “I’m encouraged by their knowledge and their attention and their work ethic.”

“I’m not discouraged at all,” Reagan said. “I’m encouraged by their knowledge and their attention and their work ethic.”

That's good but hopefully one of these days we'll also see "their performance" included in that statement.

We had this same article last year. Rod is gonna have to prove it on the field before we drink the kool-aid.

You're right about him having to prove it, but this article did not appear last year because Coleman wasn't here during the spring.

Until we can see it for ourselves, all we can do is report on what the coaches and players are telling us and then take that with a grain of salt.

Doesn't mean guys are incredible and killing it all of a sudden but it also doesn't mean they're not.

Matt - There was a similar article during fall camp last year.

My comments probably come off a little negative. Honestly I'm a huge KU football fan that loved the Mangino days. Our football program has gotten the karma it deserved from his firing. So honestly, I'm still a little disappointed from Perkin's and our University's actions.

Just Coleman's size and speed is enough to make me pick up the KoolAid cup.

Coach doesn't say that Rod is the 2nd coming of Justin Blackman (100 receptions 1,000 yds), which is what it seems a lot of fans want/seem to expect, but it does sound like he will be a nice compliment on the other side of the ball from Nick and Tony. What's the chance of 80, 80, 50? Would that be like any other team?

Pass me another kool-aid.

Ironically, the auto-correct is kook-aid.

I'll see it when I believe it.

I mean I'll believe it when I see it

Matt, I appreciate the articles and the information because I do love watching and supporting KU football. Like the rest of us I've been burned by optimism and excitement over the potential of players on this team. I stil say if we don't get at least 5 wins this season Weis is gone. It's year 3 and I know this conference is tough, but if we are to be a good program we have to be able to beat tough teams. It's the nature of the beast to be a winning program.