TCU head coach Trent Johnson watches in the final minutes against the Jayhawks on Saturday, Jan. 25, 2014 at Daniel-Meyer Coliseum in Fort Worth, Texas. 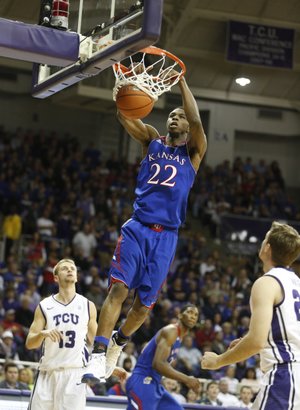 “Boy, they’re good,” Johnson said after KU defeated his team, 91-69, in front of 7,494, the largest crowd to watch a basketball game in the building. “They’re really good. Watching tape, it’s hard to find a weakness.”

On a night when Andrew Wiggins scored 27 points, Joel Embiid 14 and Wayne Selden 12, a night that Perry Ellis had 14 rebounds, Johnson cited another player as the key to KU’s improvement throughout the season, a player who didn’t score a point Saturday.

“I’ve seen Andrew play before,” Johnson said. “He’s special. He can play. Joel can play. Wayne can play. You can go right down the line. The bottom line why I think they’re so much better nobody talks about, (Naadir) Tharpe. I like the way he runs the team, the way he competes.”

Johnson was referring to the body of Tharpe’s work this season, not Saturday night’s game, in which the junior point guard didn’t attempt a field goal or a free throw, didn’t commit a turnover and dished four assists.

TCU’s Amric Fields summed up Wiggins in one word, and then expanded his thoughts.

“Talent,” Fields said. “Just a talented guy. To be a freshman and be as efficient as he is, that’s pretty great.”

He wasn't alone in playing well.

"In my shallow opinion, they probably have six pros," Johnson said.

Are you saying that Mason is Paul Pierce? Pierce is "THE TRUTH". Why don't we stop comparing Joel to Hakeem and go straight to making him into Wilt.

Why only 6? Self is on a "pros only" recurinting run. Seems like anyone that is on schlorship for Kansas is pro material. Every single one of our players can be a pro.

Does he mean NBA Pro vs. of playing overseas as a Pro?

Am I overlooking someone as a Pro?

Don't sleep on Lucas... he has size and skill, so if he puts together a strong junior and/or senior campaign, he will definitely be in the mix to make it to the NBA. Remember, bigs under Self that have size and talent do prosper. He's only a freshman and I could make a case for him outplaying the freshman versions of the Morris twins and Withey.

That being said, if Johnson is strictly speaking of pros, NBA OR overseas, then yes, it's a lock that we'll have even more than 6. Heck, even Wesley could get consideration overseas so straight down the line we're loaded with pros: Wiggins, Seldon, Embiid, Ellis, Greene, Frankamp, Traylor, Lucas, Tharpe, Mason, Black and Wesley could all play pro at some level! By my count that's 12 pros, and it's more than likely that at least 10 of those 12 will indeed play pro ball somewhere... NICE!!!

Love Tharpe as our PG, but not seeing him as a pro, accept maybe overseas where anyone that plays for KU seems to be capable of winning championships. In that case, we probably have a dozen pros - not including the coaches/coaches' sons.

So if we are "pros" this time around, what does that make TCU? yippee, chalk up a W for TopekaYMCA. 2nd time's a charm...or is TCU wearing the "Y" hat this time?

So much talent so few games remain, enjoy the ride.

Tom the site used to post the opposing coaches press conference before I think I have only seen 1 or 2 maybe this year. Is there a reason for not seeing each game? At least each home game?