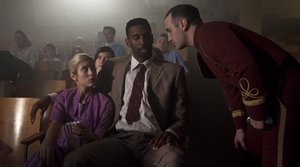 Wilt Chamberlain (Justin Wesley), center, and his date (Sara Kennedy) are told they must move to the balcony by a movie theater usher (Aubry Peters) in a scene from “Jayhawkers.”

Nobody has yet reserved a spot on the Hollywood Walk of Fame for budding actor Justin Wesley.

Yet the Kansas University senior basketball power forward from Fort Worth, Texas, has certainly received local acclaim — from the 10,000 or so individuals who attended showings of the movie “Jayhawkers” Feb. 14-16 in the Lied Center.

“I must be really good at fooling people, I guess,” Wesley said Wednesday in giving his first public thoughts since the premiere of the picture. He had been quieted by NCAA rules that do not allow him to promote showings of the film, just discuss his role in general.

“I wouldn’t say ‘surprised’ is the right word,” he added of all the positive comments he has received about his portrayal of Wilt Chamberlain in the Kevin Willmott production. “I’m grateful everybody enjoyed it and liked it. I’m glad my family enjoyed it. It was an overwhelming experience, a great experience. I’m just happy about it.”

Wesley, decked out in suit and tie, was man of the hour at the initial showing. His KU basketball teammates and coaches attended the 7 p.m. showing the night before the KU-TCU game.

He acknowledged it was “weird” to take a seat with fans sitting in the aisles of the packed Lied Center, watching himself on the big screen.

“I was talking to my girlfriend before, that I was nervous nobody was going to show up. The exact opposite happened,” Wesley said.

Once the movie started, “I was very critical of myself like I am always,” he said. “The support from people ... I really appreciated it.”

Wesley’s performance received acclaim from the man who recommended him for the part — KU coach Bill Self.

“I told him I was proud of him,” Self said. “I thought he represented us well, himself and his family. Think about it for a second. You ask somebody to be an actor who never acted. He was actually performing with professional actors. The guy who played coach (Phog) Allen is a big-time guy,” Self added of Kip Niven. “The job Justin did was exceptional.”

Self joked that Wesley actually didn’t have to stretch much in portraying Wilt.

“That’s pretty much how he is,” Self said of Wesley resembling the stoic Wilt character in real life.

“I think I talk a little more than that (Wilt character in movie). I think I’m a lot funnier than that,” Wesley rebutted with a big smile. “Coach came up to me afterward and said he was proud of me and congratulated me. That meant a lot.”

Wesley was happy his performance met the approval of another person dear to him — his mom.

“She said I did well. For once, she wasn’t hard on me,” Wesley joked of his mom, Charlene, who attended the premiere.

Wesley, who will speak to the fans along with fellow seniors Tarik Black and Niko Roberts after Wednesday’s Senior Night game against Texas Tech, said he’s willing to continue his acting career.

“Kevin asked me if I’d be interested in doing it. I told him yes, so if he has any projects he thinks I’d fit in, I’d be more than willing to help him out with it,” Wesley said. “People seem to think I have a talent to do it. We’ll see what happens. I might roll the dice on it (as a career).

“It’s definitely something I didn’t see in theater arts class in elementary school,” Wesley added with a grin.

Jayhawks honored: KU senior Niko Roberts and sophomore Perry Ellis have been named to the Academic All-Big 12 second team, the conference announced. First-team members have maintained a 3.20 or better GPA, while the second-teamers hold a 3.00 to 3.19 GPA.

On Wiggins: Self spoke about freshman Andrew Wiggins on Doug Gottlieb’s radio show on CBS Sports Radio. “His consistency and his athletic ability are at an all-time high. I’ve seen more and more every day why NBA people have thought so highly of him. He’s just a couple years away, in my opinion, from being one of the premier players in the world — on any level,” Self said.

Self on how close he came to taking the Oklahoma State job when it last opened in 2008: “I thought about it because it’s my home (alma mater in home state), and people there are nice. This was a situation we thought about it for 24 hours. We decided the timing wasn’t right, and we were better off being here. This is where we wanted to be. It was kind of a unique situation to have so much coming at me that particular time so fast. It just took about 24 hours to step away from it and evaluate it.”

Recruiting: KU signee Cliff Alexander Tweeted this about JaQuan Lyle (6-5 senior Huntington, W.Va. Prep), who completed a recruiting visit to KU on Wednesday: “Rock chalk we gotta get @jmamba5 to commit to the family.” The country’s No. 22-rated player is considering KU, Oklahoma State, Memphis and Oregon. West Virginia and Providence have also been involved ... Charles Matthews, a 6-5 guard from Chicago St. Rita, on Wednesday committed to Kentucky over KU, Illinois, Michigan State and Marquette.

When is the film going to be available to purchase or to go to a theater to view?

..."the timing wasn't right"...this is why down deep I cringe just a little everytime OSU fails. I don't want them to be great but I do want them to be good enough that Travis Ford keeps his job and the Cowboys stay the hell away from HCBS!!!

My hats off to Justin Wesley. When he gets in you see a really good athlete with some real basketball skills. Disappointing not to see more of his play. Too many young players looking to build skills for the future.

I was a freshman at KU with Wilt and had an accounting class with him. He ended up with more to account for than I did. He was a better athlete than me but I had more women.

"He ended up with more to account for than I did. He was a better athlete than me but I had more women."

Darn, you stole my line. Thanks for making my day.

I should have said I thought about having sex with more women than he ever had. Oops, there goes one now. It's great being a man. although I'm sure transgenderism would also be fun.

Welcome to one of, if not the largest clubs around. That said ~ your (our) claim as stated, is still pretty darn impressive,

"Wesley, who will speak to the fans along with fellow seniors Tarik Black and Niko Roberts after Wednesday’s Senior Night game against Texas Tech…"

Gary, thanks for answering the question about whether Black will speak at senior night. I've been wondering about that.

Looking at the photo above and old pics of Wilt, Justin bears an uncanny resemblence to the young Mr. Chamberlain.

Two on two, I'd take Wilt on my side and challenge any other two basketball players that ever played to a game of 21. [my job would be to throw the ball into Wilt then stay out of his way!]

That was the same idea Frank McGuire - Philadelphia Warriors employed during the '61-62 season when the Big Dipper averaged over 50 points and 48 minutes per game.

Wilt was a big man and went by the nickmane of The Big Dipper. Wesley look more like The Little Dipper.

A question was asked earlier that I am also interested in hearing more information about ~ the one about plans for distribution of the film.

During the premier they had a signup sheet for those interested in buying the DVD. We were told and email with buying instructions would be sent out sometime soon. I'm sure when that info is released the LJW will print the info. If not, I'll give it in a post.