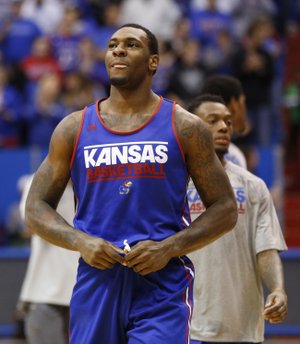 Kansas forward Tarik Black smiles as he looks up into the stands to see about ten thousand fans during an open-practice scrimmage on Saturday, Oct. 19, 2013 at Allen Fieldhouse.

“I am definitely a huge cartoon fanatic,” said Black, Kansas University’s 6-foot-9, 260-pound senior transfer out of the University of Memphis who has never outgrown his love of animated TV shows.

“From Japanese and Asian anime all the way to ‘Tom and Jerry,’ good All-American cartoons, modern-day cartoons,” Black added. “It doesn’t matter. I love cartoons. I buy full seasons of cartoons, DVDs, just to throw them in and watch them. I catch them on TV, however they may come. I definitely enjoy cartoons a lot.”

Black in a recent interview was willing to plug some of his favorite cartoons.

“Did I say ‘Tom and Jerry?’” he continued, smiling. “I like ‘The Simpsons,’ ‘Ed and Eddie,’ ‘Dexter’s Laboratory.’ I have a real repertoire. I could go on for days.”

Though Black could watch his cartoons for hours on end, he would not be considered a couch potato.

“To be honest, I haven’t stepped on a scale since I’ve gotten to KU. Actually I did step on a scale, but Hudy blocked it. She looked at the weight. I told her I didn’t want to see my weight,” Black said.

“I don’t really care about it anymore. I just want to feel good and feel comfortable with myself on the court. That’s more important.”

Pressed to describe his body this year versus last, he said: “I toned up. My jumping ability is a little better. I’m a little quicker on my feet. At small things, I’ve gotten better.”

He has impressed at early-season workouts by giving up his well toned body. He dives on the floor for loose balls, has been physical in the post and set a good example for KU’s large freshman class.

“He should be a great sealer,” KU coach Bill Self said. “We’ve not recruited anybody or had anybody who should be better at sealing and scoring with angles than what he can be. We actually try to play to that.

“He will have a huge impact on our program in (his) one year,” Self added. “He’s also as good a leader as we have. He hits Joel (Embiid, freshman center) every day. When Joel hits back, he says, ‘Good job.’ He’s helped Joel a lot in an unselfish way.”

Black, who knows how to express himself eloquently, quite frankly knew he’d have no problems adjusting to KU when he chose the Jayhawks as his transfer destination for a final year of college ball.

Examine closely the answer of the man — who is armed with an undergraduate degree in organizational leadership — when asked to identify one particular reason he chose KU over Duke, Oregon, Ohio State and Georgetown.

“I don’t know. I’ve always been kind of a subtle guy, not too extravagant, not too flamboyant, at the same time I always liked being a high-caliber person,” Black said. “That’s how Kansas is. It’s not on everybody’s radar. You have to respect Kansas. Kansas will always be one of the top teams in the country, no matter what. Especially with coach Self at the helm, because no matter what, they’ll be at the top. I like that. Coming to a program like this, there’s the humbleness, but also the expectancy of greatness. Put that together, and it’s perfect for me.”

Black, who averaged 8.1 points and 4.8 rebounds a game his junior year at Memphis, said he’s so intent on helping KU claim a 10th straight Big 12 crown and national title that he’s not dwelling on his dream of one day playing in the NBA.

“The irony is this is probably relieving pressure,” he said of being at KU. “I’m not thinking like that. This is not a final opportunity to make the NBA, it’s more so a breath of fresh air, being out here with my teammates. We laugh so much together. We have fun together. This thing is bigger than basketball to us.

“We’re a family. We say that for a reason. We really are a family, enjoying the family and all the accolades. We’ll put ourselves in coach Self’s hands and make it happen.”

Today’s fundraiser: Bill Self and his players will host a Fall Festival and Equipment Drive from 2 to 4 p.m. today at Abe and Jake’s Landing, 8 East Sixth Street, in downtown Lawrence. Admission is free and open to the public. Fans who attend are asked to donate new and gently used sporting goods and equipment to go to the Boys and Girls Club. The KU players will participate in games with attendees including Pop-A-Shot and “Dance Dance Revolution.” There also will be a photo booth. The types of equipment to donate can be found at http://bit.ly/15pzeBu

First exhibition: The Jayhawks will open the exhibition season against Pittsburg State at 7 p.m. Tuesday in Allen Fieldhouse.

“We’re excited to play. We need to play against somebody else. We’re tired of trying to beat each other up right now,” Self said.

Dude likes cartoons. I like cartoons. Draw your own conclusions.

You would make a good couple?

The Tarik Black deal is interesting. Memphis fans have commented that he looked the part, practiced well, but then didn't perform come game time. Is this one of those players that we, as Kansas fans, have become giddy about simply because he wears a KU uniform? We are prone to that, you know.

Questions do surround Black. The guy only played 20 minutes per game last season, which was less than he played either his freshman or sophomore seasons. Something was amiss.

The most astonishing stat to me was that for his three year career, Black had just 32 assists .. in three full seasons! Unbelievable. In his sophomore season where he played his most minutes (895) he had a mere 6 assists. His career assist to minutes played is .013. Young was .052.

At .013 assists per minute played, you would almost have to be trying NOT to pass. It is really an unbelievable stat. I kind of felt that TRob had a tough time passing out of double teams at time .. he had 72 assists in his final season. Withey and 29 and 35 in his final two seasons. Aldrich 31 his final season. Something to watch.

As far as points go, Black scored .403 points per minute played in his three seasons. KY .326. So Black scored at a better rate. And Black was a way better shot blocker based on his first two seasons than KY, though last season they both had 20 blocks (and KY had less minutes). The point being, really, is Tarik Black better than Kevin Young? Are we getting a significantly better player, one that is marginally better, or a push?

All reports seem positive. But the leadership comments, etc., could as easily be attributed to KY last season, right? Positive, helping younger guys, energetic. When I see the low assist rate, I think of a black hole in the post. Or a guy with no court vision. It is something to keep an eye on. What does he do when he gets the ball on the block? And the rebound rate is pretty concerning. I have never felt that Traylor has a feel for rebounding. Seemed to oddly be in the wrong spots many times. But his rate was on par with Black. We need Black to grab boards. With Ellis not the most aggressive personality, Embiid a freshman with little experience, and Black having the low rebound rates, perhaps rebounding from our post players could be an area of concern.

I don't know what to expect from Black. All reports have been positive. But if Black can't rebound the ball at least at a KY rate, Embiid may take a bigger share of minutes.

You ask some really interesting questions, Jack. Perhaps Black's weight loss shows he's going to take advantage of this second chance? IMO opinion, it certainly shows he's serious. He's got a degree already, so he's a smart guy. Serious + intelligent + chance to play his way into the NBA = Hopefully a guy who can grab six rebounds, score a few points, eat up some space in the paint, give five hard fouls and provide senior leadership on the floor. I really like hearing he's diving for loose balls. That's the kind of intangible that would set a great example to our young phenoms and justify his scholly. RCJGKU!

"Coming to a program like this, there’s the humbleness, but also the expectancy of greatness. Put that together, and it’s perfect for me.”

Black revealed a lot with this statement. He was clearly not going to leave the Memphis team for the NBA. He was clearly not with a program where he was challenged by the fanbase to lead the team. Leadership under Pastner mirrors Pastner's persona...nice guy trying hard. Black was an under-acheiver at best there. But, with Self, Hudy and the Jayhawk fanbase, he knows what he has to accomplish and will not embarass himself or let people down by being the same guy he was at Memphis. After all, do you think he would want to go through this season with a new program and intentions of impressing NBA scouts and be left in the shadows behind a bunch of freshmen who are clearly NBA bound? He's got to understand the Wiggins phenom. will overshadow him no matter how improved his game will be vs. the past, as you have pointed out. But, he needs respect to have made this trip worthwhile. His story alone will draw attention. But , this is basketball where stats rule.

Black was a significant underachiever at Memphis and that's not a big secret. He knows this year is his one chance at the NBA and so far, he appears to be very committed to doing everything necessary to get to the NBA. Fortunately, he's at best going to be the 4th scoring option for KU, likely 5th which means there's not a lot of pressure on him to be the man. The two biggest things Black needs to do this year is stay on the floor for about 25 minutes which historically has been an issue for Black since he is very foul prone and the other is focus exclusively on his defense and on being a better rebounder. So far it appears that Black has done everything asked of him, but obviously how he performs on Tuesday and going forward is the more important time for him to prove his maturation and commitment to being a better player.

Is the first game against Pitt only on Time Warner????