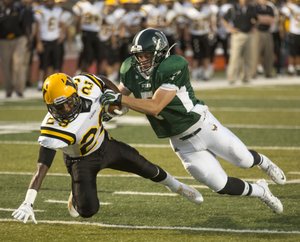 Free State's Blake Winslow tries to pull the ball away from Shawnee Mission West's Andre Maloney (29) as he makes the tackle during their game Friday night at FSHS.

Maloney rushed out of Weis’ office as Dineen was set to head in, and the Free State safety could not help but think how cool it would be to play college football with a guy he had battled against so many times in high school.

Today, Dineen is forced to confront the fact that he never will see his once-future teammate again. Maloney died Friday evening at Research Medical Center in Kansas City, Mo., a day after he suffered a stroke and collapsed on the sideline following a long touchdown reception against Leavenworth.

“He would’ve been the type of player who came in and started as a true freshman,” said Dineen, whose Firebirds knocked off Maloney’s Vikings last week in a battle of the top two teams in the state. “He was that good, and I was really looking forward to going up to KU with another Sunflower League guy in the class. It’s just so sad that this happened. We were just on the field together, and he was doing great, running fast, doing what he does, and now this. It just goes to show how precious life is.”

Maloney, a 6-foot-2, 180-pound defensive back who committed to KU in late June, was the sixth-ranked player in Kansas, according to Rivals.com. When Maloney fell into a vegetative state on Friday and worsened throughout the day, his family released a statement explaining what took place Thursday night and that he was receiving care in the intensive care unit.

As Maloney fought for his life, several people connected with KU and Kansas City took to Twitter to voice their support. Kansas City Royals slugger Billy Butler was one. Dineen was another. And Weis, who is not allowed to comment on specific recruits until they sign with the school, also tweeted with a heavy heart. Late Friday, Weis released a statement that expressed just how big of an impact the tragedy made on the KU football program.

“We are absolutely devastated by the news of the passing of Andre Maloney,” Weis said. “Our hearts are broken at the loss of such an outstanding young man. Our thoughts and prayers are with his family, especially his mother, Rosalita. We knew from the moment we met Andre just how special he was and he will never be forgotten. The Jayhawk family will forever hold Andre close to our hearts.”

Shortly after I met the woman I now call my wife, I found out that she had her child taken from her in a vehicle accident. Knowing what type of impact that losing a child can have on an entire family, my wife and I have been and will continue to pray for this young man's family. It's heartbreaking to us not just as fans, but as human beings alike. I hope this family gets all the support they need through this terrible and rough time.

People tend to forget tragedies like this after time. The family will have to live with his loss the rest of their lives. I too had a child taken way too soon and you grieve for a lifetime. Prayers going to their family and continued strength to your family as well RockChalkCaliHawk. It will never totally leave their minds and hearts. A piece of you dies when you lose a child. A spark of life is taken with your child. It's truly unexplainable the magnitude of such a loss. God bless the family during their lives and may he watch over them from now on. God Bless you young Jayhawk and Rest In Peace!

Thank you for the kind words rxdoc. Although I haven't experience the loss of a child I feel my wife's pain and choose to help her through the grieving process. The entire Maloney family, as you said, will have a lifetime of grievance, and It really saddens me to know that others have to go through what we go through. Prayers and blessings to you and your family as well rxdoc.

It's a tough road after that kind of tragedy strikes a family. I truly hope they seek help getting through it. We lost our daughter when I was in pharmacy school. It probably goes without saying life changed for me at that point. Grades didn't matter and school was secondary. I can't tell you how many tears I shed but I don't think you could measure them in drops. I sincerely pray they take advantage of mental health that is available and most likely a stint on an anti-depressant. I'm not sure many people could make it through that and function without those interventions. Your wife knows my pain and I'm sure she feels it daily. It never goes away. I truly hope their community will collectively hug the family going forward keeping his memory alive in their hearts. Having been through it I know full well that people have a hard time knowing what to say and how to approach you after a life changing event like that. You aren't supposed to bury your children and I pray no one reading this ever has to go through that. Please give my best to your wife. I will remember this in my prayers as well. God Bless.

May his family and friends find some peace and comfort in the multitude of warm memories and knowledge that someone so young had such a profound impact on those around him. From the stories I have read this was a bright young man who was wealthy in friendships and earned respect.

An unexpected death is always one of life's most devastating moments ~ and when it is a young person, even exponentially more so. Our thoughts and embracing love go out to Andre's mother, Rosalita, and to all of his family, friends and teammates. He, and they, will be remembered as part of the Jayhawk family.

Shocking, and incredibly sad. My heart goes out to his family. So hard to lose a young life with a bright future like this. Just devastating.

I can't do Kusports anymore. Google surveys have pissed me off "to the point of no return". I'll have to get my enlightenment from Ku athletic, Rock chalk Talk, JayHawk Talk and other blogs. Google, in their arrogants can simply provide a 'skip this survey button?

To the Maloney family, I am so sorry for your loss. My condolences and prayers are with you.

Very sad news. Mr. Maloney had a bright future ahead of him. Our thoughts and prayers go out to his family and friends.

My god this is sad. How does a teenager die from a stroke? It's things like this that makes life scary.

Eternal rest grant unto Andre, O Lord, and let perpetual light shine upon him. May the souls of the faithful departed, through the mercy of God, rest in peace. Amen.