Kansas forward Tarik Black cuts through the Georgetown defense for a bucket and a foul during the first half on Saturday, Dec. 21, 2013 at Allen Fieldhouse. 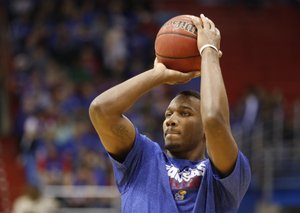 Images from Saturday's game between the Jayhawks and Hoyas at Allen Fieldhouse.

The Big East as we once knew it may be dead, but its signature brand of basketball is alive and well.

Just don't tell that to Georgetown coach John Thompson III, who was less than impressed with his team's toughness during Saturday's 86-64 loss to Kansas University at Allen Fieldhouse.

He wasn't kidding. Despite comments from the Kansas players who said Georgetown was the most physical team they had faced thus far, Thompson III said the Hoyas (7-3) did not play up to their standard for physicality, particularly in the paint, where the Jayhawks out-rebounded the visitors 39-29 and stood tall every time they were pushed.

“I don't think we were physical tonight at all,” Thompson III continued. “We slapped and fouled but we weren't physical.... We have to be an aggressive team in general and, if you look at the game, we didn't make enough physical plays. And when I say that I mean a good box out, we have to be the one to come up with the 50-50 balls.”

This was not a case of a coach seeing something that nobody else in his locker room saw. Georgetown's Nate Lubick, who finished with four points and five rebounds in 16 minutes before fouling out, whole-heartedly agreed with Thompson's assessment of the Hoyas' effort.

“Obviously we didn't do what we needed to do to win the game,” Lubick said. “...We didn't come ready to rebound, ready to fight and that's why they won the game.”

Three Georgetown players fouled out. Two others finished the game with four fouls. And the Jayhawks finished half a dozen plays at the rim with whistles blowing and Hoyas hanging on them. To make matters worse for Georgetown, KU made 31 of 46 free throws, with the KU big men combining to hit 20 of 26 free throw attempts.

“They did a good job of getting us in foul trouble,” Thompson III said. “Their front-court was very good today.”

Asked if was impressed by the way Kansas (8-3) stepped up and matched the Hoyas' toughness, Lubick simply tipped his cap.

“Yeah. They were physical,” he said.

One of the most physical forces for the Jayhawks on Saturday was freshman center Joel Embiid, who finished with 17 points and eight rebounds in 21 minutes and shot 9-of-12 from the free throw line.

I hope Perry Ellis will be okay for the up coming games.

I thought Georgetown played pretty good bball, too. They should be in top-25 by March. We played stifling D and our posts were well prepared to counteract their physical.

Tharpe and the rest of the team are starting to figure out how to breakdown a zone without relying on 3's.

It is also great that Tarik seems to be settling in to our system. There were long stretches where we were playing our 3rd, 4th, and even 5th big - without any drop off in production. At this rate, no one is going to be able to handle our frontline. Our challenge may be how they handle chasing around a bunch of small ball g's on D. Gotta feeling we'll be seeing a bit of that as well.