Senior Matt Kleinmann points at the Big 12 championship trophy after the Jayhawks defeated Texas 83-73 in KU's final regular-season game, and last game of the season in Allen Fieldhouse on Saturday, March 7, 2009. 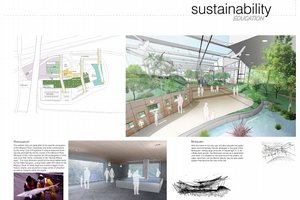 Matt Kleinmann, who will graduate from Kansas University with a degree in architecture Sunday, will be attending graduate school across the state line next school year.

Washington is located in St. Louis — just down the road from Columbia, Mo., home of the rival Missouri Tigers.

“The great thing is, if I’m lucky enough, I’ll be there sitting behind the bench next March when we are the No. 1 seed in the Midwest Regional. I’ve already looked it up. We’ll have two games in St. Louis,” Kleinmann added enthusiastically.

Kleinmann — who was part of five Big 12 regular-season championship teams and one national title squad in his five-year KU career — will be rooting for the 2009-10 Jayhawks to advance to Sweet 16 and Elite Eight games at the Edward Jones Dome in St. Louis.

The man nicknamed “Big Red” also was accepted to Tulane University, but elected to remain in the Midwest rather than head to New Orleans in pursuit of an advanced degree.

“Washington has a program where you go to Tijuana or South Africa. It’ll be a great opportunity,” Kleinmann said of a project in the summer of 2010 which will complete his degree requirements.

He leaves KU just as his sister, Whitney, arrives. Whitney Kleinmann will graduate from Blue Valley West on Sunday. She plans to study Spanish and be pre-med at KU.

“She’s a National Merit finalist, got a 34 on the ACT,” her proud brother stated. “The funny thing is, she may be involved with KU basketball helping tutor the guys’ team. She’s already expressed interest in becoming a tutor.”

Kleinmann — he’s proud to report he finishes with a 3.53 grade-point average — will try to walk down Campanile Hill on Sunday near the front of the line so he can race to his sister’s graduation ceremony.

“My Senior Day was about me. This graduation day is about her,” Matt said, acknowledging he’ll be sorry to leave Lawrence for the final time as a student.

“Coming in, I wasn’t sure what to expect. The opportunity I was given ... the experiences I’ve had ... I can’t say how great a decision I made in coming to KU,” the nonscholarship player noted. “Winning the national championship sort of validated what was the best decision of my life so far, coming to KU.”

How smart is this guy?: Kleinmann agreed to give the J-W a synopsis of his three-day “studio” that kept him up 72 straight hours (give or take a few one-hour naps), culminating in a midweek final presentation:

“My fifth-year spring studio for Prof. Gaylord Richardson focused on designing a sustainability center with the added components of an aquarium and/or biosphere. On top of that, I drew from the (Kansas CIty) River City Market, which is just south of the site, and also incorporated mixed-use housing. The project was delivered on four 24-inch-by-36-inch boards and was reviewed by professors, members of the Kansas City Port Authority and visiting professor Steve Hardy of UrbanFutures.org.”

“Basically, he has to get this decision right,” Thomas’ AAU coach, Derrick Bobbitt, told lasvegassun.com. “It’s pretty simple: Come home (to New Jersey), think about it, make a decision.”

Thomas, who will sit out the 2009-10 season per NCAA transfer rules, will have three years of eligibility remaining starting in 2010-11. He averaged 1.6 points and 2.0 rebounds a game last season.

At least its not Mizzou. Hed have been excommunicated then.

My wife's cousin went to Mizzou for grad school and wore his KU gear all the time. Brave fella, that guy... Also, QT already picked UNLV. He just hasn't made a formal announcement yet. Check the message boards for more information on this.

See what happens when you try to cheat...

Fear us all of you lesser programs, within the next year we WILL be the national champs again for the 8th time.

Uhhh...I would suggest against going to Tijuana. This kid screams American, and the Mexican border town drug wars should not be taken lightly.

That's the only stat where Memphis will ever prevail over KU!

Of course, that stilll left thousands of empty seats in the FedEx Forum, on average per game!

Washington U is a great school. I wish you luck, Matt.

There was a scary time that I was rooting for Kentucky with Gillespie at the helm. With the new coach, I can get things back into perspective. The continuing insecurity of Kentucky fans continues to delight...

KY_Cats1 No .. but I see what happens when you do cheat.. you don't win you just get more votes .. Do you work for Acorn by any chance????

Gaylord is teaching 5th year again? Had no idea.

Congrats on gradschool. Doing arch grad school straight out KU was one of the best decisions I made.

(Side note: Mizzou doesn't have an architecture program, so we're safe)

Get real, KY_Cats!!! Next year we win the title and your Calipari one-and-dones leave with nothing!!!

BTW...love the fact that KY "fans" feel the need to come on our board. Guess we should be flattered!!! I've never once thought to post on a KY site.

Nice project, Matt. I graduated from KU-SAUD only 3 years ago, and I'm already dumbfounded by your graphics skills...

By the way, if you get a couple of drinks deep with Gaylord, he'll wrestle you. But he's a big guy, so don't underestimate him!

Going to a school in Missouri????

Next question. Does he inadvertently bring everything back to baseball?

Once a Jayhawk---always a Jayhawk. I want to wish Matt the very best. He was a vital part of KU Basketball!!!

Good for you Matt...Wash-U is a great academic institution! And there are a lot of us Jayhawks here in the Lou but we always need more. Plus you can go keep an eye on Beal for us at Chaminade...

Congrats Matt on your accomplishment! You've provided an excellent example to many players. You are truly a role model for KU b-ball!!

One thing about it ... being a KU grad and continuing schooling in Missery ... he'll be the smartest student in his class.

I know this is off-topic, but does anyone have some advice on how to upload an avatar? I've tried numerous times with .jpg and .gif, but it just doesn't work. What's the trick?

RockChalkGuy: get your image go to http://imageshack.us/ save image as link in imageshack- then copy pull up your avatar page or web and paste your imageshack link

You should be able to navigate it

Wash U is one of the 2-3 best schools in the Midwest. Both Undergrad and Grad programs are highly acclaimed. It's as close to a Ivy League school as the Midwest has to offer. Only Northwestern carries its pedigree academically.

It's also a D-III powerhouse in virtually all sports - men and womens. All that with no athletic scholarships.

He'll do great. He strikes me as a guy who'll do well at whatever he decides to do.

Anaill - agree about the drug wars, but Tijuana? Come on it's basically located in California as it is. It's like mexican chain restaurant food. I think he'll be ok there.

KUFan90: I saw a report not too long ago about decapitated bodies showing up in the parking lots of Starbucks in Tijuana. The border towns are the worst right now.

truehawk93: Thanks for the info. I'm not sure that I got it to work through image shack, but I was able to direct load it today for some reason.

I miss moose. He was a great opponent for KU. Never knew the guy but he seemed to be an upright fellow.

How did Billy Tubbs outlive Moose?

Good job Matt. We have a large group of alums in St Louis for the basketball watch parties. We'd love to have you at any of them. Wash U is a great school.