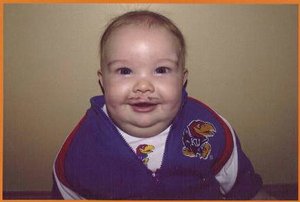 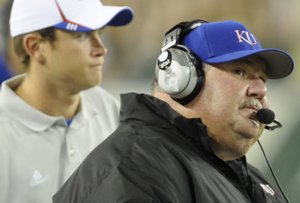 Kansas head coach Mark Mangino glances up at the scoreboard during the third quarter Friday, Sept. 12, 2008 at Raymond James Stadium in Tampa.

At 8 months old, Bode Lubbers is already an Internet superstar.

And all the young Wichitan had to do was let his mother put on an eyeliner mustache and a KU sweat suit. And, of course, channel his inner Mark Mangino.

Baby Mangino began circulating on the Internet after making his debut on an electronic Halloween card, said his mother, Angie Lubbers.

The resemblance to the Jayhawk head football coach is impossible to miss. It started when the parents (two Wichita State grads) picked up a tiny KU sweat suit in a Target store. Lubbers put it on Bode, added the mustache, sent it to 20 friends and family, and an Internet star was born.

None of the 20 has confessed to sending the photo outside the group, Lubbers said.

She said the family has followed the online voting faithfully, and she remains constantly surprised at all the attention, having been interviewed on local Wichita television in addition to the photo’s online viral status.

“I keep saying it’ll end eventually,” she said. “But then it seems like someone else will pick it up.”

KU Athletic Department spokesman Jim Marchiony said that while he had seen the photo, and thought it was cute and offbeat, he did not think many others in the athletic department had taken notice.

Man! 2008 really was the best year in KU History! Chalk up another title!

I received pictures of this. I take it as a good sign. Our coach is nationally recognized.

I have a birth mark that looks like Lew. But this is ridiculous.

How long before Marchiony sicks the lawyers on them?

Ok, so did Marchiony take a poll? Of course everyone in the athletic office saw it, unless they've been hiding under a large rock the last three months.

Of course Mangino saw this, unless he has pizza for eyes in which case he probably ate them.

1865Hawk ... yeah, I hear that Marchiony is thinking about suing good ol' Roy for wearing that unlicensed JayHawk on his shirt during the championship game last year. For that matter, so are several UNC folks :)