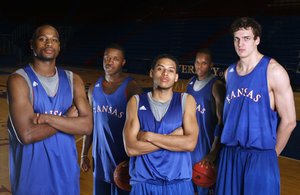 Kansas University seniors, from left to right, Darnell Jackson, Rodrick Stewart, Jeremy Case, Russell Robinson and Sasha Kaun will be honored, and each will speak tonight after the Jayhawks' game against Texas Tech at Allen Fieldhouse.

Will he be back next season? Will he hire an agent, or do you think he'll hold off on that, test the waters at the draft camp, and then decide whether he'll enter his name into the NBA Draft?

Such questions, rain clouds hovering over elite basketball programs across the map, can sap the old-fashioned, college enthusiasm out of the sport that warms our winters. Therein lies the beauty of the senior class that will be honored in tonight's Allen Fieldhouse finale. Thrill-killing questions never have been posed about Jeremy Case, Darnell Jackson, Sasha Kaun, Russell Robinson and Rodrick Stewart.

Case, recruited to Kansas by Roy Williams, red-shirted a year and graduated last spring. The rest are on track to graduate this coming spring.

To a man, the five scholarship student-athletes, who will give senior speeches after tonight's game against Texas Tech, never did anything to leave the impression they viewed wearing a Kansas uniform as a means to achieve a more lucrative basketball end.

Bolting early in pursuit of NBA dollars never presented itself as a realistic option for them, which makes Jackson's development into a prospect projected by many to go in the second round of the draft all the more gratifying.

A reserve until early this season, Jackson has a terrific touch on his 15-foot jumper, yet only uses it to win, not to audition for NBA scouts. In the first five minutes of his second-to-last game in Allen Fieldhouse, an 88-74 victory against Kansas State, Jackson scored eight points and didn't take a shot from outside of two feet. He opened the half with a put-back slam and also scored on a short bank put-back, on an alley-oop dunk and on another dunk after he sealed his man, caught the pass, and executed a subtle move to avoid the help defender. No KU player has been more productive this season.

During last month's reunion celebration of 110 years of Kansas basketball, former KU star Ron Franz made a point to introduce himself to Jackson.

Jackson will experience an important last tonight when he makes his final run through the tunnel.

When Robinson, Case, Stewart, Jackson and Kaun start, it won't be the force job it is on most Senior Night games. The five played together for a stretch early in November. Look for them to get off to a strong start, fueled by a grateful crowd that appreciates the effort this class of seniors put forth.

Robinson, missing New York, hung tough and grew up in a hurry after a frustrating freshman season. Every team needs a glue guy. Robinson makes the all-Elmer's team. Case never did earn a spot in the rotation, and never did complain about that. Stewart, a transfer after a year at USC, rode the pine his first two seasons at Kansas, never stopped trying to get better and finally earned a spot in the rotation. Jackson's year-by-year growth, in the face of so much personal tragedy, embodies all that is good about college basketball. Kaun went from starter to reserve this season, a demotion, at least in name, that didn't poison his passion.

After tonight, they'll be gone from the Fieldhouse. Gone and not soon forgotten.

I like it, Keegs. And I like this overachieving senior class even more. Yes, some of you may jump on my ass for saying "overachieving", but really, who thought any of these guys would be really, really good? D-Block is by far and away my favorite, and maybe even the best player on our team (this year at least).

Darnell Jackson reminds me a lot of Chris Richards from last year's Florida team. Richard was of similar size and build, and turned his stellar play off the bench for the back-to-back NCAA champs into becoming a 2nd round draft pick (one of 5 picked from that team, if I remember correctly). I think Darnell could end up in a similar boat after his incredible season this year. It couldn't happen to a better or more deserving person, either.

Who would you vote onto the All-Big 12 team from KU if you could only have one on the team? (I'm assuming only one will be on the team because you have Beasley, Augustin, Jerrells and probably the freshman Griffin from OU on the team.) Your choices would be Shady, Rush, Chalmers or Darnell.

Personally, I think Darnell has meant the most to this team and should be 1st team All-Big 12. He gives us the most consistent post presence from a physicality standpoint and rebounding and sheer toughness. He does a good job of staying out of foul trouble, too. What a storybook ending to a career rocked by personal tragedy.

My vote would go with B.Rush.

I wish these guys would let the 'audition' thing go. He is obviously referring to Shady.

I actually think it's great a KU player can 'audition' for the NBA by hitting 12-15 footers, blocking shots, having great post moves, strong on the boards, scoring 15-17 pts a game, etc.

Thanks, Sasha, Darnell, Russell, Rod, and Jeremy! Four Big 12 championships! And much more to come this spring, I hope. Congratulations. You'll be missed.

All of these guys are an important part of our team. Jeremy is a guy that can come in at any time of the game, play a solid point guard, and hit a couple of three's without thinking twice about it. Rod can come in, play excellent D, and even though he's undersized by the big's, can come in and get you tough rebounds and hustles at all times. Kaun, like Darnell, has developed into a great post player. In the years past, he had trouble moving his feet on D and had trouble scoring. Now, he's a great defender, rebounder, and can score anytime he wants. He was huge on Saturday. Darnell, what can you say? He's awesome. He plays nasty, he plays tough, and has went from solid reserve to exceptional starter. Russell has always been a great PG. He had to grow up fast and made his mistakes early, but it's all paying off for him now. This class emobodies a spirit that this whole team feeds off of. I hope we whip TT tonight and sends these guys out on a high note!

I know the NBA talk for this class is focused on Jackson given his size and improvement, but does anyone know about the possibility of Sasha getting an NBA look? He has his issues (HANDS!), but his touch seems to have improved and he is almost 7 feet tall. Would a team take a chance on him as a big bench guy that might get better?

I see Kaun having to work his way into the League. Hopefully I'm wrong, but I think if he wants to continue with basketball he'll have to spend a year or two overseas or in the D-League. Maybe not, maybe he'll get picked up in the draft. Or maybe he will choose to be a computer engineer or make video games, but I think he'll play basketball for at least a few more years after this one.

Robinson was always my favorite in this class. A kid from the Bronx who came to KU to be a part of the greatest tradition the sport has every known. He stuck with it and even as a freshman playing behind Miles he didn't get very many minutes but I still remember him playing solid ball escpecially defensively. We're all glad he stayed.

Just kiddin' you (sorta). I completely agree with you though regarding Kaun and DJacks.

Destroy Tech!! (but thank them after the game for knocking off Texas)

great senior class everyone! thank you for playing at KU! on a fantacy note i think kaun will last longer as a pro than the rest. size counts.

Mr. Lawrence, I really hope you knocked on wood after that comment!

You could be right, speedy, but if he has a bad back it could be tough to sustain an NBA career.

I hope Chalmers stays and becomes the man next year..