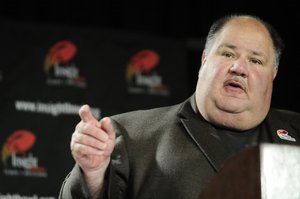 If there were any doubts about Kansas University football coach Mark Mangino’s appreciation for junior receiver Kerry Meier, they were dispelled Tuesday during the team’s final news conference before taking on Minnesota in today’s Insight Bowl.

Responding to a question about the program’s turnaround over the past seven seasons, Mangino spent a good deal of time praising the character of Meier, who transformed himself into one of the conference’s top receivers less than a year after losing the starting quarterback spot to current standout Todd Reesing.

“I think when you talk about turning the program around here,” Mangino said, “he probably will be recognized as one of the most important people to be associated or to be a player at Kansas.”

Meier, who needs just 68 receiving yards today to eclipse the 1,000-yard mark, has been highly regarded by KU fans since the start of the 2007 season, when he rebounded from his demotion to become one of the most important pieces in the Jayhawks’ offensive puzzle.

“He has done everything you can possibly ask in terms of sacrificing for this football program,” Mangino said.

In preparation for today’s game, the Minnesota coaching staff has used an interesting strategy to quantify the talents of Reesing: They’ve compared the Jayhawks signal-caller to New York Jets quarterback and future Hall of Famer Brett Favre.

“Anytime someone is compared to someone like Brett Favre, one of the best, if not the best in the history of the game, all I can say is, ‘Wow’,” Reesing said.

I couldn't agree more. Not a bid Duggie basher or LJW basher for that matter as I really enjoy access via the net. I am old enough to remember the world before the net when I never got to read about KU as I have lived "away from home" my entire adult life.But, come on. This article should have either been re-written or dropped in the trash.With regards to the notebook: 1. How about an update on Sharps health?2. How about covering Jayhawk activities this week in Phoenix?3. How about linking to any local coverage of the game in AZ?I miss Chuck Woodling! Where are my Notes and Quotes while wondering why Texas d-coordinator would agree to a multi year agreement at $900M / year in exchange for a promise to be named later when he could clearly be a head coach right now making $2+ million / year as a head coach some where?I guess math is not a pre-req for being a football coach?How do you explain that to your family?

$900M/ year? I think you need to re-check your math txhawk.Again, all this butt kissing is not going to help the Gophers from getting stomped today.

Dugan, my favorite articles to read are always the "notebooks" because they usually provide ALOT of quick hits and information but this year they haven't provided me much. In fairness to you, Bedore's "notebooks" for the bball team have been lacking aswell. Please provide us with MORE, MUCH MORE during the 2009 year. Thanks!

I think some of the articles have been lacking as well and I could certainly make a jab about him being a Tiger and that he didn't learn as much as he would have at the William Allen White School of Journalism as some people have done, but it doesn't help him write better articles that we may enjoy reading.Let's try to be more constructive and let them know what is good about the articles and what we think would make it better instead of always attacking the guy. In the long run, everyone benefits that way and perhaps the karma will be positive for you as well.Happy New Year!