Russell a thankful participant in Beijing

By By Scott Russell - Special to the Journal-World

KU cross country coach Stanley Redwine talks about his former athlete Scott Russell, who is competing for Canada in the javelin at the 2008 Olympics 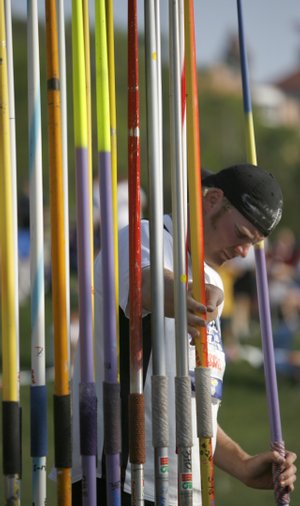 Editor's Note: Scott Russell is a former Kansas University All-America javelin thrower who will compete in his first Olympic Games for his homeland of Canada in the qualifying round at 8:10 (CDT) tonight. Russell, 29, now makes his home in Lawrence.

"No, you can't always get what you want,
But if you try sometimes, you might find,
You get what you need."
- The Rolling Stones.

As I reflect on the events of Aug. 8, I recall the lyrics of Mick Jagger. You can want something so bad in life, whether that be material things, wealth, happiness or, in my case, a life-long goal, but sometimes things get in the way and you don't achieve these things.

I have felt this way for so long. When I missed qualifying for the 2000 Sydney Olympic Games, I felt like I was still too young and immature in this sport to be extremely upset. I was nowhere near my peak in terms of age, so I was not heartbroken. At the time I was still a Jayhawk at Kansas University and I had two more years of competition in the NCAA to look forward to.

On the other hand, the 2004 Olympics were a heartbreaker. I was expecting to qualify for these Games. How do you take not achieving a lifetime goal? At the time I felt like life was over!

You train for four years with the expectation of making a team and in the end, you get nothing. I recall standing at the back of the runway in Victoria, British Columbia, Canada at the 2004 Olympic trials with one throw left to qualify for the Olympic Games.

Down the runway,
Carry your speed,
Hand High,
Quick to the block,
Finish the throw!
NOTHING! Tears.

Most of you know my 2005 season. I was determined to redeem myself. My funding from Sport Canada was dropped and Nike dropped me. I was determined to prove everyone wrong! It was extremely easy to train with a chip on my shoulder. Every session, I would think of the people who doubted my ability. If a run or a lift was difficult, I would think, "They don't think you can do this!" Training went great all year. The only problem was I was not seeing the result in meets.

It's extremely difficult to feel like you are as fast, as strong and as ready to throw far and get nothing in terms of results. I felt ready all year. I even warmed up that year at the KU Relays at 82 meters (really far for warming up). All I could manage all year was 73m to 75m. What I thought was going to be my last chance to qualify for the 2005 World Championships in Helsinki, Finland was the Canadian Championships in Winnipeg, Manitoba. I threw 77m, which was a great throw in the monster of a head wind that we threw into, but not far enough to make the team. I was done!

Most people say I quit or I'm done or I'm retiring and really don't mean it (like Brett Favre). I really mean I was quitting! Luckily, I was talked into and sponsored by a very generous donor to do two more meets. I traveled to Ottawa, Ontario and in the first competition, first throw, VOILA! 84.41m! New Canadian record!

When you think about the opening ceremonies, what stands out to you as a moment that you will remember for the remainder of your life? Entering the stadium? The first sight of the crowd? The Parade of athletes? Seeing Roger Federer, Dirk Nowitzki, or the entire USA Men's Basketball Team? The lighting of the torch? No.

As I stand in the tunnel, 100m from entering the stadium, the entire Canadian delegation starts to sing the national anthem! I still get chills thinking about that moment. As the anthem ends, "O Canada, we stand on guard for thee." The chills run up my spine. I begin to think of the work that was put into making this dream a reality. The countless number of hours running, jumping, throwing, the weights, my coaches, my family, 2005 when I almost quit, the doubters and the believers. I think of the perseverance, that I now realize I had in the face of the hard times that athletes (not only myself, but thousands of others) go through to make it to the Olympic Games.

I am grateful to have the family and friends that I have met from being in this crazy sport. Without the thousands of people that have made an impact in my life, I would not be here. The support that I have been given to this point is what has inspired my performance to date. I am here, because I love throwing the javelin, which at times was gone, but in this very moment has never been greater. I love this sport and the experiences that I have been given from it.

So here is this guy Scott, training like a mad man in Anchutz Pavilion a couple years back. A 6 or 7 time All American and two time national champion and NCAA record holder doing wind sprints at the same time as a football practice is going on outside. He stops to catch his breath at the open doors at the south end of the pavilion and is trying to cool down, when one of the football guys runs over to him. Scott thinks he might be making small talk or something.... right. The guy says to him "You can't stand here- you can see our practice". Scott looks at him like he is totally joking, and he is like "no seriously, if you stand here, your back needs to be to the south".LOLOLOL, As soon as Scott graduated, our athletic department pretty much forgot who he was. Like Scott is going to watch the practice and then go call up Gary Pinkel and tell him what we're doing. Best of luck in Beijing, Scotty. Make that dream a reality!

Great story. Scott is one of the nicest guys you'll ever meet, and I'm glad good things happen to good people.And for some sick reason, I believe every single word of what 20 wrote.

Are you saying that Bill Self can sleep comfortably knowing that Scott Russell is in Bejing right now?He cannot spy on KU's opening basketball practices preparing for their Canada trip?LOL

I guarantee 100% the story is true. Joe Vaughn was the guy who told him to "keep his back to the practice field"- and thats not a slight at Joe, he even told Scott later how bad he felt doing it.We now know the athletic department isn't allowing the FB team to tell people to leave.But Anchutz on a hot day when no AC is on is nasty, and you're telling the guy to FACE to heat in between doing multiple sets of repeat 100s.Anyway, like I said, Scott's about as die hard a Jayhawk there is, and the incident didn't make him less of one, but its just telling that a guy can bust his butt for 5 years, win multiple NCAA championships break an NCAA record, and be told he'd have to leave Anchutz if he looked in the wrong freakin direction.

There is absolutely nothing wrong with what was asked by the football staff member (if it was true, and it very easily could of been). Rules are rules, and as a student I was asked to leave a mens basketball practice while observing during one afternoon by one of Coach Williams managers. If a coach doesn't want someone to watch, then they should be asked to leave, whether it is me, Scott Russell, or some other interested party.