KU has had stellar go-to guys 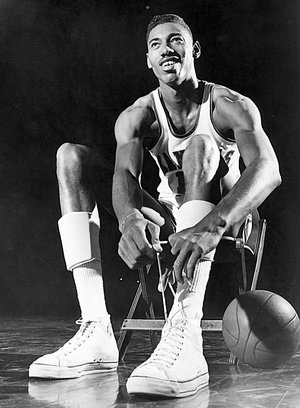 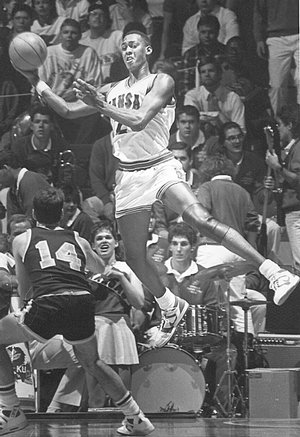 In between, the Jayhawks finished second, each time by a single point, in 1953 and 1957. Again they had men who were voted their tournament's most valuable performers in pivotal roles - B.H. Born and Wilt Chamberlain.

This year KU has no such bell-cows. The balanced output of this 2008 group has been generally a blessing, occasionally a curse. Where in past title quests Kansas has had so-called "go-to guys," this time there is no such Mr. Reliable. There are players who may rise to such an occasion, but not consistently enough that they are money in the bank.

Kansas' immediate challenge is to defeat a North Carolina powerhouse that has sensational 6-foot-10 Tyler Hansbrough as a ferocious and relentless force who can personally will his team to victory. He did that the past weekend against Louisville. In point guard Ty Lawson, the Tar Heels have a super-quick quarterback rated among the best in the nation when he is physically sound, which he seems to be at this point. Then there is versatile Wayne Ellington, a 6-4 swingman who is regarded by such experts as Digger Phelps and Bob Knight as an unsung hero of the Tar Heel drive to the NCAA Final Four.

Question: Will Carolina's Big Three provide the thrust to overcome Kansas' Top Trio? Oddly, the bookies are also dealing in treys, at last report installing UNC as a three-point favorite for tonight's contest in San Antonio.

But who are those corresponding mainstays for Kansas?

KU for all its successes had nobody rise beyond the '08 All-America honorable-mention ranks - Brandon Rush, Darrell Arthur and Mario Chalmers. They have the size and experience to measure up to the Hansbrough-Lawson-Ellington triumvirate. But will they bristle up and produce in the clutch, individually or collectively, in what is shaping up as one of the most significant and ballyhooed Jayhawk games in years?

Kansas too often is plagued by sameness rather than the kind of gritty personal excellence that emerges at crunch-time the way Hansbrough displayed it against Louisville. As for the bench strength, Carolina might have a slight edge from the standpoint of game-changers, but the Jayhawks can get some potent minutes from the improving Sasha Kaun and the explosive Sherron Collins. There are potential sparkplugs, but how often will one or any of them fire when it really counts?

One can't fault coach Bill Self for wishing he had a single force like Lovellette, Manning, Born or Chamberlain to allow the Jayhawks to get even for that excruciating 54-53 triple-overtime victory Carolina registered in the 1957 finale in Kansas City. That was long before anyone ever heard of the controversial Roy Williams and the obsession so many Kansas backers now nurse about beating him and his Tar Heels this year. Roy was only 7 years old then, and UNC's coach Frank McGuire, Lenny Rosenbluth and Joe Quigg were the villains-in-residence.

Then there was that 78-68 Carolina victory over Kansas in the 1993 NCAA semifinals, when Williams was KU coach and KU product Dean Smith masterminded the Tar Heels. Kansas as a team this year has a chance to atone for that showdown setback without the slightest regard about the coaching carousel. UNC ousted KU in '93 in the semifinals; can Kansas return the favor this time?

The 6-9, 240-pound Lovellette staked his team to the national title against St. John's (then coached by '57 UNC villain McGuire), while also leading the nation in collegiate scoring with a 28.5. Then he and six teammates, Bob Kenney, Bill Hougland, Bill Lienhard, Dean Kelley, Charlie Hoag and John Keller, starred for a United States Olympic gold medal crew.

Lovellette moved on to professional fame and won title rings at that level. Could he help the Jayhawks nowadays? In his prime, of course he could!

Consider that a frail 6-9 B.H. Born was a heavyweight reason KU got to the national finals against Indiana in 1953, only to lose by a single point. But no fault of Born's.

Blocked shots were not tabulated, but if they had been, Born would have been the first triple-double Jayhawk with his 26 points, 15 rebounds and 12 swats before fouling out exhausted. He was the first player to be named tournament most valuable while playing with a losing team.

Consider, too, what Kansas accomplished that year with Born as the only starter standing taller than 6-2. The others were 6-2 Hal Patterson, 6-1 Gil Reich, 6-0 Allen Kelley and 5-11 Dean Kelley. Born didn't hit his stride until 1952-53 and then went on to become an all-AAU standout with the Peoria Caterpillar-Diesels - in a day when AAU ball was on a par with the emerging NBA.

Chamberlain? There is annual talk about which modern freshman collegian is the greatest of all time - Michael Beasley, Kevin Durant, Derrick Rose, O.J. Mayo : no contest. Chamberlain couldn't compete as a freshman at Kansas, but he made up for it as a sophomore sensation. He revolutionized basketball in a way that only Bill Russell and Bob Kurland can approximate. Another KU tournament MVP on a losing team.

Chamberlain dominated the professional ranks the same as he did college competition and at last look had more than 50 records still on the NBA books. His 100-point game in 1962 and then his 50-plus-point, 25-plus-rebound average for the whole '62 season probably never will be topped.

Danny Manning would perhaps be the perfect fit with this 2008 Kansas team that continues to look for a rudder and an after-burner that can thrust it consistently to a performance such as it gave in defeating Texas in the Big 12 tournament finals. Not only did the incomparable Manning score, defend, rebound, block shots and uncork key assists, but he made everyone around him better. Ask former 1988 title teammates like Chris Piper, Milt Newton, Kevin Pritchard and Jeff Gueldner.

Danny had a fine but not spectacular professional career because of three severe knee surgeries. Now he's back with his alma mater as a coach. His ability to help people improve shows clearly in the emergences of Darnell Jackson and Sasha Kaun. He still has work to do with Darrell Arthur but may not get the chance if Arthur ill-advisedly jumps to the pros.

Just imagine if Bill Self could pick any one of those '52, '53, '57 and '88 superstars as the aorta to activate his current collection of talented bloodlines. Which one would you guess he'd pick to vanquish North Carolina this Saturday? If there could be such magic, it wouldn't be the slightest problem.

Any one of the four.

Objection: RelevanceSUSTAINED!Mayer...do you really have to dig back into the 1950s EVERY SINGLE TIME YOU TALK ABOUT THE 2007-2008 TEAM??? Good Lord, once in awhile it may be interesting, but unfortunately I think you use it as a crutch to avoid more in-depth analysis of the here and now.

milehighhawk,I beg to differ. KU has a long history of great teams. One can easily say that the 50s were the hay day of KU basketball glory.No matter what ole Roy and Coach Self have done in the 90s and new millennium, they are insignificant to the glory days of the 50s.Remember the Phog! Maybe you are to young to remember the real glory days of KU! Go Hawks!