Mayer: Focus on game, not Roy 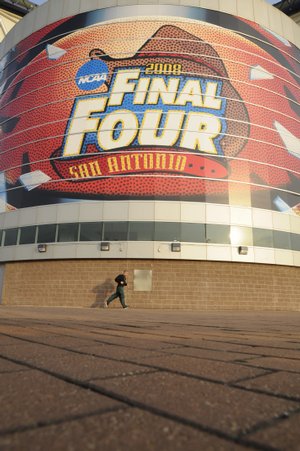 Whenever people are engaged in an intensely competitive situation, they get added incentive to succeed if they have the convenience of a villain. Without a scapegoat, they may create one, ridiculous though the fabrication may be.

Many remember when Americans could stir their juices via such villains as Togo, Hirohito and Yamamoto of Japan, Hitler in Germany, Georgia Joe Stalin and the Soviet Union's evil empire. Nowadays we know there are murderous criminals in the ranks of terrorists and jihadists, but they aren't as easy to isolate for derisive purposes and emotional pump-ups.

Because Kansas University is meeting North Carolina in the NCAA basketball semfinals Saturday, people who should know better are enjoying rag-dolling UNC coach Roy Williams primarily, with, for a change, ex-coach Dean Smith as the backup. Far too many, particularly those anonymous cowards in chat rooms and on message boards and talk shows, delight in devising and circulating disgusting trivia. Such dolts should be allowed nothing sharper than a crayon and no surface more sophisticated than a bathroom wall.

Former Jayhawk Dean Smith, who has represented his home state and Alma Mater so brilliantly for nearly 60 years, again is being harpooned for luring Williams back to Carolina after Roy's brilliant 15-year tenure as Kansas' coach. Roy virtually never failed to command and earn respect as a solid gold representative of KU.

But because Roy once indicated he might be here forever and because Dean orchestrated getting his former assistant back to Chapel Hill as the 2003 season ran down, some remain resentful, ugly and obscene when they discuss these guys. This may only add to such ire, but while at KU, Roy termed the dirty tricks tendencies of some electronic critics as being part of a Crapnet. Perfect label.

Williams has his flaws, but he was and is a platinum citizen as well as a hall-of-fame coach.

Same old barbs, Roy - even intensified as two legendary basketball programs prepare to meet in San Antonio. It is sad and depressing that two '08 coaches/good citizens who have given Kansas University a combined 20 years of the best kind of basketball imaginable, with tremendous class and dignity, are ensnarled in the current hatefulness and speculation. They deserve better.

It's hard to understand why Oklahoma State made its coaching change at a time when it distracts from the goals of alumnus Bill Self. Bill ain't leavin', so he should be left alone to direct his team's preparation rather than being dissected on the Crapnet.

C'mon, folks! Give up this constant, ever-growing childishness of demonizing alleged villains! UNC has Roy, KU has Bill and they have two super teams ready to do battle in search of another national title for their schools. Get off the coaches, enjoy the outstanding matchups and focus on the damned game, without further verbal treachery and gymnastics.

If there's any revenge factor, Kansas should bust a gut to atone for that 54-53 triple-overtime heart-ripper UNC delivered in 1957. How about getting even for Carolina's 78-68 national semifinal victory in '93? Let's return that painful favor regardless of UNC's staffers. Then gloat if you must.

It'll take an intense fire in the collective KU gut, but if it's there, Bill Self will be justified in sending his kids into battle with: "L'amour toujours, tonight for sure!"

So, just how would you capture the euphoria of victory - or, god forbid, the agony of defeat - in just a few words?As the Jayhawks get ready for their big game against North Carolina in the Final Four, we're giving everyone a chance to submit their suggested headlines for Sunday morning's paper.Some advice: Be clever, descriptive and, of course, concise. Remember: Your optimistic words just might end up being prophetic.For now, we'll stick with taking ideas for the national semifinal, the one pitting Bill Self and the No. 1-seeded Jayhawks against Roy Williams and his No. 1-seeded Tar Heels.Show off your headlines by going to www2.ljworld.com/headline and leaving your suggestion in the comments.

"Far too many, particularly those anonymous cowards in chat rooms and on message boards and talk shows, delight in devising and circulating disgusting trivia. Such dolts should be allowed nothing sharper than a crayon and no surface more sophisticated than a bathroom wall."

Is there any better way to put it? No.

In my opinion most of KU already has let go.

btw, I didn't know that being anonymous was offensive.

Here's a huge article about Roy...now don't focus on it.

Thank goodness for the Crapnet. It keeps me connected to KU, the LJW, and my fellow Kansans/Jayhawks from all the way up here in NH.

Thank you Mayer for stirring the pot. Thanks to all the media who's obligation it is to not let anything die, ever. Yes there will always be people who hate other people for some reason or another or maybe even no reason at all. Honestly, though how can I expect a writer to realize that ignoring those people is far more effective that insulting them.Let go KU! Beat Roy Williams, beat Dean Smith, beat Tyler Hansbrough, beat UNC!

It's incredibly ridiculous to have any mention of Stalin or Hitler or the rest in this article. It's illogical and inappropriate to analogize our feelings towards those admittedly evil men and the way that some KU fans feel about Roy. Just because you were alive then Mayer, doesn't make it relevant.

Just once I would like to see an article about what KU did for Roy, instead of hearing what he did for KU. Roy was an untested commodity when we hired him; he had never been a head coach before. WE took a risk on him, not the other way around. And contrary to other posts on the net, He did not pull our program out of the "trash". We had just won a national championship for crying out loud, and had a long tradition of excellence in BB. KU gave Roy the tools and opportunity to be successful. Do you think if his first head coaching job had been at Wichita State or even Kansas State he would have made it to the FF in 1991. Doubtful. This Hall of Fame coach might not have such a sparkeling resume if we hadn't been willing to take a chance on him and give him such a great place to start. Roy knows this and that is one reason why he still loves KU.Kansas, the birthplace of North Carolina basketball. That says it all! Go Hawks

"Brandon and his minions weren't about to divorce themselves from the university with about a $100,000 surgical bill staring them in the face. They'll pursue repair and healing on KU's nickel.""Meanwhile, I'm a lot more worried about our combat heroes and heroines than about whether Rush can work the system even further for his personal benefit."http://www2.kusports.com/news/2007/jun/01/mayer_injury_will_cost_kansas/Before you go calling someone a coward, you may want to re-read some of your articles.

Mayer is so outdated. In this sophomoric piece he reduces himself to namecalling and conjecture. This type of journalism does not necessarily reflect modern day standards. I have to wonder if, in the decade when Mayer began his career, there were no journalistic or ethical boundaries in which a writer must stay. It is painstakingly obvious to me that this piece represents a certain lack of skill, tact and professionalism. Come on, name calling! Dolt! Cowards! These are the words of an unskilled writer lacking in creativity, in my opinion. I further agree with BannerforKirk, that the historical references are irrevelant. Last, I cannot help but express my absolute agreement with everyone who wonders how on earth the LJW can print a piece on focusing on the game and not Roy, and then print a huge article, FOCUSING ON ROY! I guess they don't get it.

I didn't read this whole thread, so I'm sorry if I repeat something that has already been written.Regarding Dean Smith, don't forget that he was the one who convinced Larry Brown to come to Kansas. Brown gave us a national championship. Roy never did. Brown was far more important to Kansas basketball - which was on the verge of dipping into the muck and mire of mediocrity. Brown put us back on the map.Roy's replacement has taken us to two Elite 8's and a Final Four in 5 years. He is a better recruiter (Roy: I can't get anyone to come here who is from east of the Mississippi) and will win a national championship soon.I'm glad Roy is gone. Self will be at Kansas until he retires and will be a Hall of Famer. And a national champion. Something I think that Roy would never have achieved.

Here's some more anonymous fodder for ya Mayer:Why is that these same so called "cowards" on the message boards know more about basketball than you do and actually talk about things besides Roy Roy Roy! As for the reference to the terrorists, jihadists, etc. I think you are showing an extremely cavalier attitude towards services our countrymen have died for and as an ex-servicemen myself I find this outrageous!

Great article. Message to Soobawls. I suggest that you actually go to college and get a degree.

OH YEAH, about the "crapnet," I guess it is articles like this one that make it crap!Hahahahahahahaha

you lost me after your totally ignorant second paragraph.LJW, how do you continue to give this guy columns when he is as out of touch as he is? the 90+ demographic can't be that important to your advertising revenues.

I really does not want to hear anything about Roy but Mayer you started it!About Dean Smith, there is no way I am going to forgive and forget. Why did he do something like that to KU, his alma mater? Where is the love for KU? That is outright betrayal. Tell this to anyone they will understand. If you Mayer does not get it, then you are a * moron!

Worst columnist ever. My favorite:"Many remember when Americans could stir their juices via such villains as Togo, Hirohito and Yamamoto of Japan, Hitler in Germany, Georgia Joe Stalin and the Soviet Union's evil empire."Are you kidding me? The LJW actually prints this stuff? Can Mayer gracefully retire? Please.

This is terrible writing, hardly comprehensible.I agree that people should get over Roy's elopement, but this? come on! And I will never forgive Mayer for the article about Rush.On another note, sorry to hear about Rod's knee. It's a sh*tty hand he's been dealt lately. It just plain sucks. Sorry, Rod and thank you for all of your hard work.Rock Chalk.

Mayer,You are a grounded consciousness for KU nation whether they agree with or accept it or not! KUDOS!

http://www2.kusports.com/news/2007/ju... ... i can't believe this guy wrote this last year! Is he supposed to be a KU fan? ...and as far as this article goes, how can you be the one writing a Roy article on a weekly basis, then wonder as to why people keep arguing about Roy. Can't you take a hint from those "anonymous cowards in chat rooms and on message boards and talk shows, delight in devising and circulating disgusting trivia" (who I might add are the ones buying your paper and visiting your website...keeping you employed)??? WE DON'T WANT TO HEAR CRAP ABOUT ROY ANYMORE! I also think it's amazing how you almost wrote this article for the sole purpose to attack those KU fans and LJW readers...it's sick chubs......I can see tomorrow's headlines... "Stewart Hurts Knee For Sole Purpose of Getting Free Health Care from KU"...

soonoballs-We are not an elite progam? are you a fu##ing idiot! Go back to mancrappen, we don't need or want fans like you!

Well 24 hours from now we will be celebrating a KU whupping of the tarbabys!

The job of a journalism is to stir interest in the story.Well done Mr Mayer!You have a rare ability to keep our ties with history grounded!