Danielle McCray can play. No doubt about that. But McCray can't play very much.

"I think right now that I can definitely have better practices and my minutes will go up," McCray said.

An Olathe East High product, McCray underwent surgery for shin splints in early August, missed a month of workouts and is still rounding into shape.

"I think I'm getting better," McCray said after coming off the bench to spark a second-half surge that enabled the Jayhawks to open a cushion after clinging to a 36-34 halftime lead.

"I like the fact she can score," KU coach Bonnie Henrickson said of McCray. "She has a great stroke. She'll play more of a vital role when decides she can excel in stamina and endurance." 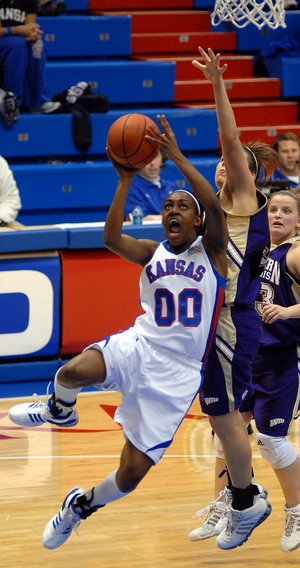 McCray has been doing more than just polish her stroke.

"I have to make 100 threes in practice every day," she said.

And how many shots did she have to take to reach the century mark?

McCray was expected to be the showcase player among Henrickson's seven-member freshman class, but she hasn't started a game yet and is averaging less than 15 minutes on the floor.

"I know my minutes can get higher," she said. "It's going to be soon, too. I think it's around the corner, surely by the time Big 12 starts."

Conference competition will begin in January.

While her offense has been exceptional, McCray's defense has been spotty. She also was whistled for four fouls during her 15-minute stint, and one of her infractions looked like a football block.

"Danielle fouled so bad," Henrickson said with a smile, "that the security officer by me reached for his handcuffs."

Henrickson had plenty of reason to smile after the Jayhawks posted their highest point total of the season. Moreover, 10 players recorded four points or more, and 11 snatched at least one rebound.

Now if the Jayhawks hadn't committed so many fouls. Each team was whistled 25 times.

"Defensively, I have no earthly idea why we were that bad," Henrickson said. "It was a foul fest, a free throw contest."

In addition to McCray, freshman LaChelda Jacobs and junior Jamie Boyd were in double-figuring scoring with 14 and 10 points respectively. Boyd, who hit all five of her shots, recorded a career high. All three of the Jayhawks' leading scorers came off the bench as the reserves outscored the starters, 47-28.

"The only shots we didn't make," Henrickson said, "were our bad shots."

Notes: Point guard Kelly Kohn played a team-high 31 minutes and was credited with 7 assists, but she took only two shots, both three-point attempts, and made one. : KU officials generously estimated the crowd on the icy night at 1,601. Perhaps a third of that number were actually there. : Kansas (4-1) will play at Wisconsin on Sunday. The next home game will be Wednesday night against South Dakota State. :