Keegan: Don’t get too excited

Should a law-abiding citizen receive a key to the city for not committing any crimes? No.

Should a man be praised for being a "good father?" Of course not. To be anything but that would be to squander a priceless gift.

Should an employee receive a bonus for giving an honest effort for 40 hours? Negative. It's part of the deal.

So please excuse Kansas University basketball coach Bill Self for not lobbying Gov. Kathleen Sebelius to declare today a state-wide holiday because the basketball team Self coaches hustled and stayed mentally checked in for the entire game to defeat Towson University, 87-61, Sunday night in Allen Fieldhouse.

In the opening minutes, when KU gave the effort but couldn't get into a good offensive flow, players could be seen looking at the scoreboard, a sign of nervousness and an indication they considered every point precious in the wake of a stunning loss to Oral Roberts University.

"Well, we played better," Self said afterward. "Of course, you can't play worse. I don't think we should get too excited about this, personally, because this was what you should do every night. You should play that hard every night because if you play that hard every night good things will happen the majority of the time. Not all the time, but the majority of the time. We'd be undefeated if we gave effort like that every night. Certainly it's a step in the right direction, but it's not anything you should get ecstatic about."

Kansas doesn't have the look of a team that has an intimidating presence yet, but many elements that could help the Jayhawks get there were on display for long stretches.

For one thing, in Darrell Arthur, KU has a better inside scorer than anyone on last season's roster. While most of Arthur's 26 points came on easy buckets, it's worth noting that big men who need to gather themselves before shooting and move mechanically can make what for Arthur are easy shots look more challenging. 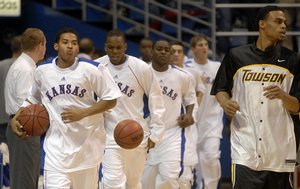 The versatility of the roster also could be seen, especially when Brandon Rush received his second personal foul and headed to the bench. Self went with Sherron Collins, Mario Chalmers and Russell Robinson. That's when KU went on a 20-6 run, a five-minute stretch that started with Collins hitting a pair of three-point shots and ended with Chalmers nailing a trio of three-pointers.

Some flaws still were evident. Rush (five turnovers) remains a risky ballhandler. Until Sasha Kaun returns from a knee injury, the only truly safe way for the team to defend the post is for Robinson (five steals) and Chalmers to force turnovers before an entry pass can be made. Collins, though making progress in the areas of effort and focus defensively, still has plenty of bad habits to break, such as reflexively reaching the instant he fears his feet haven't gotten the job done for him. Might as well reach for the referee's whistle and blow it himself.

"This is a small step," said Julian Wright, who did a nice Caleb Green impersonation with an over-the-shoulder pass. "There are still a lot of things we can improve on."

The Oral Roberts basketball team left its mark on the Jayhawks. They don't care to be on the wrong end of another miracle.

Considering the caliber of the opponent, this win can only be graded as pass, nowhere close to where they should be. If they do not improve their ball handling and eliminate unforced turnovers, how far they can go is very limited.