Russell Robinson, who played nine ineffective minutes the first half, sat the entire second half with warmups wrapped around his body, and, at times, his head.

He was hit hard by a case of the intestinal flu bug all day Saturday.

"Russell caught the flu that Brandon had," KU coach Bill Self said of Brandon Rush, who had the flu earlier in the week. "He (Robinson) had two bags of IVs before the game. He couldn't go."

KU junior Jeremy Case, who had an assist in 10 minutes, felt for his teammate.

"Man, he was really sick. He threw up at halftime. Russell is really tough. He'll be all right," Case said.

"I could tell warming up before the game he had no energy," noted junior Rodrick Stewart, who made his first start in place of Julian Wright, who was benched to start the game for being tardy to Friday's practice.

"The thing about Russell, he'll go until he can't go any more. He's really tough."

¢ Rodrick's first start: Self on his decision to start Stewart, who had one assist in six minutes.

"It was a good game for Rodrick to start. They played a perimeter 4-man," Self said of Darrell Harris, who stands 6-foot-10 to Stewart's 6-4. "Rodrick did a good job against their zone."

Stewart was told he'd start at shootaround. It marked the first start of his KU career. He started 17 games at USC before transferring.

"Coach said to make sure I was ready to play, make the easy play," Stewart said. "It was my first start at KU. I enjoyed it. The hard work pays off."

¢ More on tardiness: Self set a precedent for not starting players who were tardy in the Winston-Salem State game, when Darnell Jackson came off the bench for showing late.

¢ OK performance: Rush, who had 19 points, thought the Jayhawks played "pretty well. I think we came out the right way and got up and down the floor. We missed a couple of open shots, but other than that, I thought we played well. The second half we didn't defend very well. They shot 50 percent (18 of 32 for 56.3 percent) the second half in our house, and that's not good."

¢ Stats, facts: KU held the Rams to a season-low 20.5 percent shooting the first half. : The Rams' 13 turnovers were fewest by a KU foe this season. KU had a season-low nine turnovers. It was fewest since committing seven against Kansas State in 2004. : Rhode Island's 32 first-half boards were most by a KU foe since Indiana pulled down 32 in the first half on Dec. 17, 1994. : Wright's 19 second-half points were most by a Jayhawk since Nick Collison had 21 versus Duke on March 27, 2003. 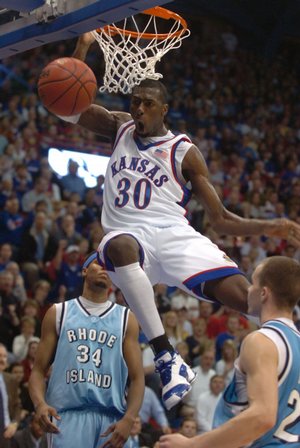 ¢ Guarantee: Rhode Island received $55,000 plus expenses for playing at KU. The Rams, who played at Ohio on Wednesday, have been in town since Thursday. KU will not return the trip to Kingston, R.I.

¢ Low in league: Rhode Island was picked to finish 11th of 14 teams in the Atlantic-10 preseason poll. Yes, the league has 14 teams.

Anyone who is impressed with the Hawk's performance Saturday night needs to read the above two statements again.

This team has such a long, long way to go. But, hopefully, they'll care about the Big 12 season more than they have about the non-conference season.

I guess these players would prefer coach schedule only Top 25 teams so they could actually show up and play hard. "If you're not Top 50, we don't care. We'll play, but we wished we didn't have to."

Teams like Detroit and URI should be getting put away by 30, according to Self.

Teams take on the tendencies of their head coaches.

Self says that you don't play great every night and so you have to bring your defense every night.

So: KU plays very unevenly and guts it out with defense.

This statement above by Self is a telling one about Self and about KU's team.

Self is not a perfectionist. He is not a systems guy who believes you can perfect, or nearly perfect a system. He appears to be a hard worker who believes in being opportunistic, exploiting mismatches and taking what they give you and using it on them till they break.

Self also apparently believes college kids are human and have ups and downs and frequently make bad choices no matter what you do. He appears to believe more in hard work and defense than perfectionism and excellence. In a way it seems a refreshingly well adjusted and healthy approach to sports, but, at the same time, it also apparently leads to a team that plays the way this year's and last year's teams did. Up and down. Stretches of excellence that begin and end and resume for no obvious reason. A consistent focus on defense to keep you close on your inevitable off nights, rather than a systematic focus on discipline and execution to minimize the number of bad nights.

RIU was picked 11th in their league and if they shot 3's as theyhave all season KU might have ben toast! This KU team is very soft. No killer instinct, many players latte to games and practice.

They are not taking things seriously and play at the level of opponents. The NCAA is 6 hard games. KU has proven the last two years, you got to play hard each game or go home.

Team is sstill reading their own McD's clipping's rather than listen to Self. It will be intersting tosee wh o wins out Self or the McD's All-Stars. They need a Moody or Hawkins or better both to show them how to maximize their potnetial thru W-O-R-K!

I admire Self for going his own way and doing it his own way--a way that seems a heck of a lot like Eddie Sutton's, and to a much lesser extent Larry Brown's. I'm not sure it is the best way to produce consistently good play capable of winning 6 straight games in a tourney, except rather randomly. Note: Sutton won a lot of games, but never won a ring. And Larry Brown only won one ring at the college level and one at the pro level, despite coaching seemingly forever.

On the con side, as I've already said, I'm not sure you can ever become a consistently great basketball team and program this way. I'm not sure you can win multiple rings the way obsessive detail and control freaks with systems like Rupp, Wooden, Smith, Coach K, and maybe someday Williams eventually become able to do.

But I sure hope so.

It would strike a blow for common sense and sanity in big time sports, if Self can do it his way.

The guy actually looks like he has fun being KU's head coach. I can't say that about very many coaches of big time programs, at least ones that have won as much as Self has already.

What a concept in D1 basketball.