On an afternoon when the Jayhawks needed 6-foot-6 sophomore Brandon Rush to be at his best, he played his worst game as a collegiate player, scoring three points in a 64-57 loss to DePaul at Allstate Arena. Blue Demons senior guard Sammy Mejia, who scored 18 of his 23 points in the second half, repeatedly made Rush look bad defensively, as well.

Two plays perfectly captured Rush's bad afternoon. First, early in the second half with nobody challenging a three-foot shot on the right side of the lane, Rush put it too high off the board, and it clanked off the front of the rim.

The other signature play of Rush's forgettable afternoon came during Mejia's personal run of eight consecutive points, when he rallied the Blue Demons (3-4) from a 53-50 deficit to a 58-53 lead. DePaul's Wilson Chandler, checked by Julian Wright, drove from the right wing and toward the foul line. Rush dropped off Mejia to try to stop Chandler's dribble. The instant Rush did so, anyone in the building paying attention knew how that play was going to end up, with the ball back in Mejia's hands and ultimately swishing through the net for three points. 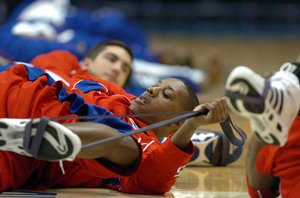 Rush made just one of seven field-goal attempts overall and one of four from beyond the arc and missed his only free-throw attempt.

"I missed a couple of layups, a lot of wide-open shots," Rush said. "They were going in and out. One of those days."

The last one of those days, if Rush can learn to contribute more when shooting poorly.

"Really good players have got to figure out a way, a little bit, and he's got to do a better job of that," Kansas coach Bill Self said. "He's not been off to a good start by his standards. Today, he never got into it. He had numerous opportunities to."

He earned preseason all-Big 12 Conference honors, which was a springboard for a bit of a reach that landed him the dubious honor of being named a first-team preseason All-American. There was a time in college basketball when players coming off big seasons as freshmen would struggle early in their second seasons, and it would be explained away as a "sophomore slump" or a "sophomore jinx." It was even said about Magic Johnson early in his second and final year at Michigan State, one that started poorly and finished with a national title.

Those terms have faded away because so few stars stay for four years anymore, but that doesn't mean they don't still apply.

"Sam Mejia played like a senior, and I couldn't be happier for him," DePaul coach Jerry Wainwright said. "It was good to see him when it really mattered do what he needed to do."

Wainwright's halftime adjustment of inserting the taller, more physical Jabari Currie in the backcourt in favor of Cliff Clinkscales paid dividends and resulted in better penetration.

Meanwhile, Rush followed a bad first half with a much worse second one.

Kansas needs someone to take over close games late the way Mejia did. Rush hasn't demonstrated the ability to be that player, so Mario Chalmers might need to assume that role.

Prediction: It won't be long before Coach Self starts benching Rush when he "fades out" (or the "stunt man" shows up, that was classic). If Rush goes more than a minute without a rebound, point, block, or assist, coach should bench him for three minutes. Sherron Collins may still have freshman tendencies, but his hustle and work are evident when he hits the floor. Having a contributor is always better than having a ghost, regardless of position.

Bill hit it right on the head. You have to find a way to contribute when your shot isn't going down. Usually Brandon has been pretty good at defense, but he never shows any intensity. That's my only problem with him. Brandon if you read this, beat someone up out there, get mad. WANT to kill the guys on the other team.

NBA? HA, HA, HA! Don't you think there were scouts at a game in Chicago? Puhlease.

Actually, it's looking like we get our whole team back next year, except maybe for Duh-rell Arthur, who would be higher in a lottery than Rush would.

Honestly, I don't think Rush wants to be a team player. Because if he did he would think about things such as his shot selection, rebounding, etc...I mean it doesn't take rocket science to figure one's role or element

C'mon, it's all pre-season until the NCAA Tourney anyhow.

You guys are all as dumb as Keegan...he didn't play great yesterday and it's hard for me to think he's a lottery pick but everyone plays a bad game. Two days ago keegan wrote an article about how being good at every aspect except offense was what made Rush a great player - what have you done for me lately, I guess

I think you mean its all pre-season until conference play. Dont tell me games like Mizzou are pre-season.

This team is a collection of big egos,unbelievable talent, but absolutely NO TEAM CHEMISTRY !

You guys are right, but chemistry all comes with time. Hopefully it'll come together soon.

I hope all of this is not a sign of another crappy postseason!

I call Rush "stuntman." He looks like an NBA prospect. Tv loves him. He's smooth. He looks like an actor that would be hired to play a college player. But when the games is on the line and things need to be done they call "stunt man" and the actor Rush is out of the game.

I recommend that Brandon work hard on his studies.

rush is nothing like his brother. at {boo}MU he was the man. brush acts like hes on the can.

it also seems to me that self is trying to groom these kids for the nba. he$$ he can't even get them to win at the college level. lets start here before he even puts any thoughts of the nba in any of these kids. before the season even started,he was worried about losing players off this team. the way they are going he doesn't have to worry about that unless its another giles thing or someone just gets upsets and just quits the team and if that happens our ad will have to take a long look at bs.

It was an absolute joke that Rush was made a first-team All-American. Even his stats alone weren't worthy of being an All-American, but anyone who watched him regularly last year could see that he rarely did anything when it really counted. This year has just been more of the same.

I would say that right now he's the weakest member of the starting lineup. So he barely makes the top five on KU, much less in the country.

Wow, there sure is a lot more room on the KU bandwagon after a couple of losses!!! I guess you would all rather go back to being the best in November & December before getting bounced out of the tournament early!

I've made these comments about Rush regularly, whether KU wins or loses. It has absolutely nothing to do with being on the bandwagon. (And considering that I went to every game during KU's last two losing seasons, and have been a fan for 35 years, I would hardly say that qualifies me as a "bandwagoner.") When a player shows up for at the most 10 minutes out of every 40 that he plays, he is simply NOT an All-American--or even All-Conference, for that matter.