John Hadl had no idea who he would room with when he reported to the San Diego Chargers' preseason camp as a callow rookie quarterback in the summer of 1962.

Not that Hadl, who had been an All-American halfback and QB at Kansas University, was surprised that his roomie was Jack Kemp, five years Hadl's senior and the quarterback who had led the Chargers to back-to-back AFL West titles.

Hadl was a bit surprised, however, about Kemp's reading material when he walked into the room. Kemp wasn't studying the Chargers' playbook, perusing the Vince Lombardi Story or digesting the life and times of Amos Alonzo Stagg.

"He was reading a (Barry) Goldwater book," said Hadl, Kansas University's associate athletic director for development. "He really talked more about politics than football. He was a philosophical kind of guy."

Added Hadl: "When I first met him, I didn't know he wanted to be president."

Kemp, who will travel to Lawrence for the upcoming Dole Institute of Politics celebration, never became president. The closest Kemp came was in 1996 when he was Sen. Bob Dole's vice-presidential candidate on the unsuccessful Republican ticket.

Forty-one summers ago, the Chargers' quarterback ticket featured Kemp as the starter with Hadl, the club's third-round draft choice, as his running mate.

Hadl may have been a heartbeat away from succeeding Kemp, yet it was actually a finger that changed his career. In the second game of the 1962 season, Kemp jammed a finger on his passing hand when the digit struck an opposing defender's helmet.

"I took over for the rest of the year," Hadl said, "and I learned a lot fast." 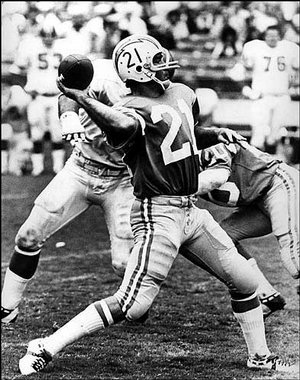 Kansas University legend John Hadl, seen here in this file photo, played on the San Diego Chargers with Jack Kemp, whose career has shifted to politics.

Kemp's hand healed, but by then he was with the Buffalo Bills because of a blunder by Chargers' coach Sid Gillman.

Gillman put Kemp's name on the waiver wire and Buffalo claimed him for $100.

"We had this crazy rule," Gillman, who died earlier this year at the age of 91, told USA Today. "If you waived somebody a week before the weekend games, you couldn't reclaim him. We were short of money, so I thought I'd waive Jack and reclaim him."

Hadl has a different theory about Kemp's departure.

"I don't think he and Sid were getting along that well," Hadl said.

One thing is certain -- Kemp led the Bills to AFL championships in 1964 and 1965. By then, Hadl was established as the Chargers' starting quarterback, and his first two years had been rough. 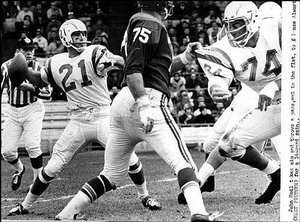 Former Kansas University standout John Hadl (21) heaves a pass as quarterback of the San Diego Chargers in this file photo. With the Chargers, Hadl played behind Jack Kemp, who became a politician and will attend the Dole Institute of Politics opening celebration next week.

After Kemp's sudden departure, Hadl was thrown into the fire and was burned, completing only 41.2 percent of his passes and throwing a glaring 24 interceptions in 14 games. The next year Gillman brought in veteran Tobin Rote and Hadl was relegated to backup duties.

In 1964, however, Hadl had a breakout year, completing 53.6 percent of his passes, throwing for 18 touchdowns and only 15 interceptions. The former KU standout went on to an illustrious 16-year pro football career.

Kemp later represented the Buffalo area and Western New York for 18 years in the U.S. House of Representatives. Then he served four years as Secretary of Housing and Urban Development under President Ronald Reagan.

Today, at the age of 68, Kemp is on the boards of several technology companies, including Oracle. Over the years, although they were teammates for just a short time, Kemp and Hadl have maintained a friendship.

"I've called him a few times just to visit," Hadl said. "If he's not in, he always calls back."