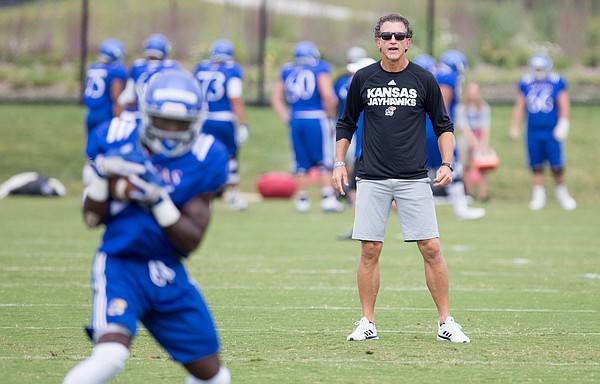 Kansas offensive coordinator and receivers coach Doug Meacham watches over a drill during practice on Monday, Aug. 14, 2017 at the grass fields adjacent to Hoglund Ballpark. by Nick Krug

Kansas offensive coordinator Doug Meacham isn’t asking quarterbacks Peyton Bender and Carter Stanley to be Deshaun Watson, or receivers Daylon Charlot and Steven Sims Jr. to be Mike Williams. But the man in charge of KU’s offense would like to see all of his Jayhawks embody some of the characteristics displayed by Clemson’s best players during the 2017 national title game.

Before the Tigers rallied to beat Alabama for the championship, Clemson trailed 14-0 in the second quarter. Watson and company’s first five drives resulted in a turnover on downs, three punts and a lost fumble. The eventual champs moved the ball no farther than 26 yards on any of those series.

“They did some things early on that weren’t very good. You never saw them panic,” Meacham said. “You never saw anyone’s head drop. You saw them just keep with it and it was business as usual, and eventually it’ll come.”

That’s the type of patience and confidence Meacham wants to instill in the Jayhawks’ skill players and offensive linemen in his first year with the program.

And during a scrimmage this past week, the coordinator even saw some of that out of his group. The first-string offense opened the practice with a three-and-out. Then the second unit did the same.

But from that point on? 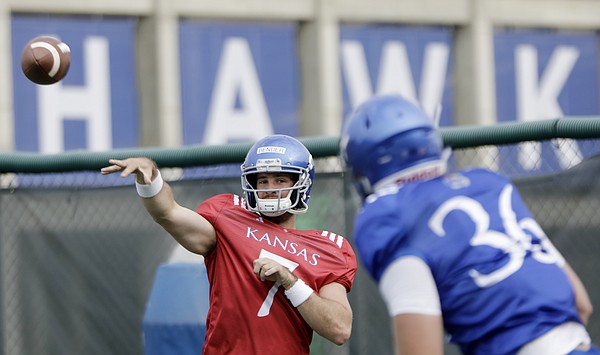 The Jayhawks’ offense was the antithesis of Clemson’s a year ago, when KU averaged a measly 20.3 points a game (120th nationally) and lost 36 turnovers (worst in the nation). Meacham thinks the 2017 Jayhawks, which also feature improved personnel, can make up a lot of ground in the production department by trusting the offense and believing the next big play is just a snap away.

“I think some places — or maybe here in the past — a couple bad things happen and you get the head drop, you get the body language, the blah, blah, blah. I don’t feel that from these guys right now and that was an indicator (at the scrimmage),” Meacham said. “Start off slow and then once we started getting into it we started moving the ball. You just see a demeanor out there with those guys that’s good.”

It will be up to Bender or Stanley — whomever wins the starting job — to make sure the offense carries itself with poise this fall. And at times, the QB should be able to do so without even completing a pass. Meacham said both candidates during preseason practices have had a knack for making smart plays. 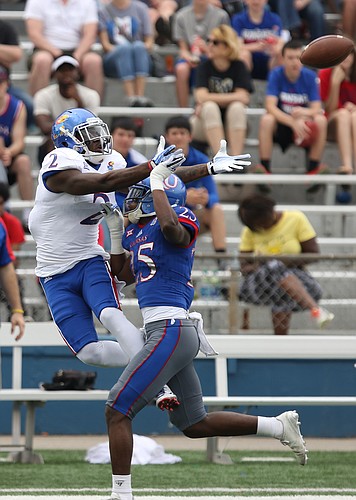 Team Jayhawks receiver Daylon Charlot has a pass broken up by Team KU cornerback Julian Chandler (25) during the first quarter of the 2017 Spring Game on Saturday, April 15 at Memorial Stadium. by Nick Krug

“Pleased with the quarterbacks in terms of throwing it away or just eating it. They’ve done well with that, because we’ll just punt it out here,” Meacham said. “We’re not turning the ball over. We’ll punt it. We’ll throw it away. It’s OK. We just punt it and we’ll play the next set.”

On average last year, Cole Moos punted 6.1 times a game for Kansas. Obviously that’s not what Meacham wants. But he does aspire to get to a point where the offense can have a bad series or two and walk off the field trusting a scoring drive is coming as soon as KU gets the ball back.

An August scrimmage isn’t anything like a Big 12 game, of course, but Meacham is satisfied with the early intangible signs from his offense.

“When things aren’t going well, they still have their heads up,” he said. “That’s big. That’s huge.”

I love the exact opposite approaches both OCDM and DCCB are taking with their respective units...

OCDM: Building up the offense, getting their confidence as high as possible due to such poor play in 2016.

DCCB: Humbling the defense and making sure their hungry and not just happy with some of the hype of individual players. They far out played the offense last year and actually had some nice stats (well chronicled by LJW).