According to the experts, four-year Kansas standout Perry Ellis won’t hear his name called at the 2016 NBA Draft.

Maybe I’m crazy, but I’m not buying it.

Ellis has spent most of the past couple of months proving his worth at workouts in front of coaches, executives and scouts, in NBA cities all over the country.

Now, Ellis isn’t unique in that sense. Plenty of college players and international prospects have done the same since the NBA Draft Combine in early May. But when it comes down to it, and some general manager and coach who want to keep their jobs are making a late second-round pick Thursday night, who do you think they would rather add to their stable of talent:

- Someone who is taller and/or maybe more athletic than Ellis but unproven?

- Or someone who scored 1,798 points at a major Division I program and will be a model pupil and citizen?

Not every team drafts players late in the second round with the intent of signing them and bringing them to training camp. But there are some organizations that need to fill out their roster via the draft or want effective players on cheap contracts. And I’d be willing to bet one such team will gladly add KU’s standout forward before the evening’s festivities conclude in Brooklyn.

Assuming none of the numerous teams which worked out Ellis during the past several weeks shocks everybody watching and selects him ahead of schedule, let’s assume he’ll be one of the final players drafted in 2016.

Here’s a look at the teams that own the final handful of spots:

Odds are the names next to one or a few of those slots will change before the end of draft night. Front offices tend to play hot potato with second-round picks late in the process and some could even get moved more than once.

For sanity’s sake, let’s assume each of those teams holds on to its late pick and examine how Ellis would fit in on each roster. 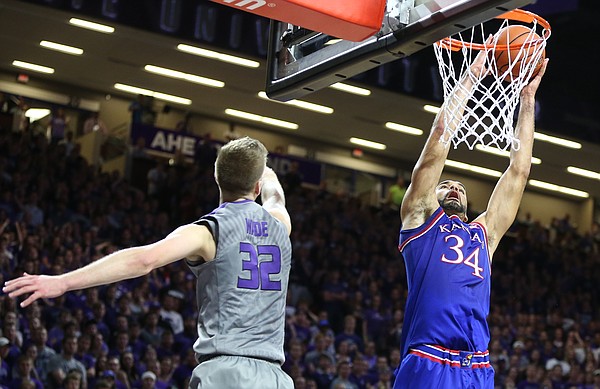 Kansas forward Perry Ellis (34) gets up for a dunk against Kansas State forward Dean Wade (32) during the first half, Saturday, Feb. 20, 2016 at Bramlage Coliseum in Manhattan, Kan. by Nick Krug

BROOKLYN, 55th pick — Boy, this squad needs all the help it can get. If the Nets can find someone better than Ellis at this spot, good for them. If not, they’d be crazy to pass on the 6-foot-8 forward, whose smooth jump shot at times went underutilized at KU.

Even if Brooklyn is enamored with those four, they’ll need some frontcourt assistance off the bench. Ellis, depending on how his team wants to deploy him, could step in at power forward or small forward depending on matchups.

Playing for the Nets might not be as enjoyable in terms of wins and losses, but that actually could turn out to be the best spot for Ellis to play the most minutes and prove he belongs in the league.

DENVER, 56th pick — As mentioned in an examination of where Cheick Diallo could fit in at the next level, the Nuggets have a pretty loaded frontcourt for a struggling Western Conference team.

With Kenneth Faried, Jusuf Nurkic, Nikola Jokic, Danilo Galinari and Wilson Chandler, a rookie forward (whether picked in the lottery or late in the second round) would have trouble cracking this rotation.

Then again, maybe former Kansas forward Darrell Arthur doesn’t return in free agency, and Ellis slides in as his replacement. You never know. But it seems Ellis’ role would be minimal next season if he did end up in the Mile-High City.

MEMPHIS, 57th pick — The Grizzlies are another team that probably doesn’t have much need for Ellis, with interior players Marc Gasol, Zach Randolph, Brandan Wright and JaMychal Green under contract, as well as veteran small forward Vince Carter.

But if Memphis likes Ellis and sees him as someone who could learn for a year, then become a replacement for one of the team’s aging forwards or someone who leaves next summer in free agency, the Kansas forward could work out longterm with the Grizzlies. It just seems unlikely he would play much next season in this scenario. 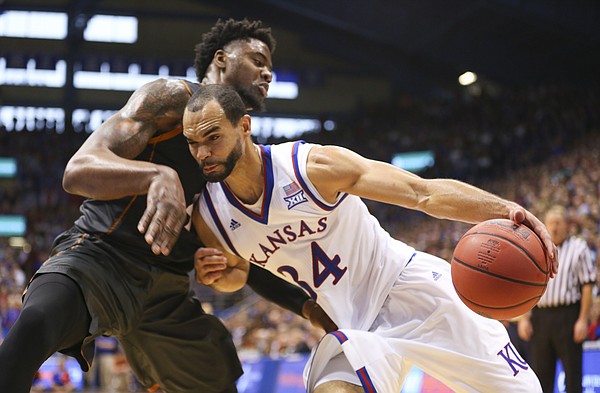 Kansas forward Perry Ellis (34) bangs into Texas center Prince Ibeh as he heads to the bucket during the second half, Saturday, Jan. 23, 2016 at Allen Fieldhouse. by Nick Krug

BOSTON, 58th pick — The Celtics own eight picks entering draft day, and reportedly are in active discussions with a number of teams in search of executing a trade or two (or three or four or more).

So no one knows exactly how Boston’s roster will look by the time training camp opens in the fall.

However, the Celtics have seemed to prefer power forwards and centers capable of stretching the floor and giving the offense space to operate. So, in that sense, Ellis would be a justifiable option as a smaller 4 who comes in off the bench to exploit specific matchups, as guided by coach Brad Stevens.

SACRAMENTO, 59th pick — Unsuccessful and, really, dysfunctional as this team has been the past several seasons, the Kings actually have a lot of options at the forward spots, to play alongside their ultra-talented, mega-grumpy big man, DeMarcus Cousins.

Rudy Gay, Marco Belinelli and Omi Casspi are under contract, and it appears Sacramento might be interested in playing big man Willie Cauley-Stein with Cousins, too.

Ultimately, Ellis (or fill in the name of any rookie here) would probably prefer to play elsewhere. But if he did end up in Sacramento, he’s too good of a person not to make the best of it and probably would play his way into the lineup one way or another.

UTAH, 60th pick — The Jazz are one of the more sound and complete teams not operating on the national radar. When it comes down to it, it’s just hard to make the playoffs out West.

As Utah has made significant strides the past couple of seasons, it has done so with solid players who — for whatever reason — get overlooked. Sounds a lot like Ellis entering the draft, doesn’t it?

From that perspective, Ellis would fit in perfectly in Salt Lake City. But is there a place for him in the rotation?

Should Utah fear losing Booker in July, Ellis could be a viable replacement, and a steal at the end of the 2016 draft.

WILD CARD, another team trades for a late pick and selects Ellis — This actually would have to be the best storyline for the 22-year-old forward.

Regardless of what franchise it turned out to be, you would think the coaches and decision-makers like him enough to make the move, and would have a plan to fit Ellis into their system.

— PODCAST: How many Jayhawks will be taken in the 2016 NBA Draft?

Ellis is unlikely to be drafted. That gives him the option to seek a try out for a team he likes and maybe even play some summer ball before heading to Europe.

How did that work out for Sasha Kaun?

The right team for both Ellis and Selden plays in Europe. Both guys went undrafted. Both guys are unlikely to ever stick on a NBA team. Much better for them if they go play over in Europe. Plaenty of ex-KU players have had very long and very lucrative careers playing overseas. And they get to see the world.