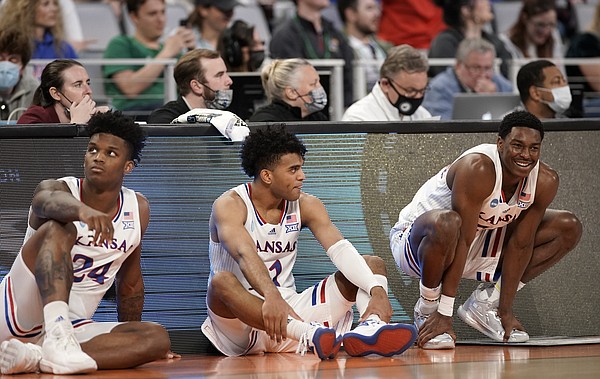 Kansas forward K.J. Adams (24), Kansas guard Remy Martin (11) and Kansas guard Jalen Coleman-Lands (55) look to check in during the second half on Thursday, March 17, 2022 at Dickies Arena in Fort Worth, Texas. by Nick Krug

1 – Remy Martin – His energy and enthusiasm off the bench is an absolute blast to watch and it’s clear his teammates feel the same way. Martin lives for relationships and loves to bring joy to people. That’s so much of who he is as a basketball player and it shows in everything he does. In this one, during the second half, Martin was fouled on a hard drive to the rim and his momentum carried him out of bounds all the way past the basket. While there, he handed out a couple of high-fives to KU band members. It took a while for the knee to heal and for the super-senior guard to get his confidence and swagger back. But it appears to be fully there again and the possibilities that opens up for this Kansas team are really something. Martin finished with 15 points on 6-of-8 shooting in 21 minutes.

2 – Dajuan Harris Jr. – Harris led Kansas at halftime with 12 points on 5-of-5 shooting. He was aggressive and confident with every shot he took and looked to be really comfortable running the floor with Remy Martin out there by his side. There will be matchups where that doesn’t work. But most nights it will. And to see how those two play off of each other and run KU’s attack together is a lot of fun. They’re in attack mode all the time. They play as hard as they can on most possessions. And they’re both lightning quick and super fast up and down the floor. What’s really cool about it is how much they seem to like each other, too.

3 – David McCormack – This was in no way one of McCormack’s best games, but I thought he had some pretty important — and emphatic — buckets and worked hard on the glass, too. Especially early. He finished with 9 points and 7 rebounds in 23 minutes and did not have to overexert himself much at all. It’s possible he won’t have to in Round 2 either, when the Jayhawks face Creighton without its best big man. If so, he’ll get some more important rest heading into next week if the Jayhawks are able to advance to the Sweet 16.

4 – Jalen Wilson – Wilson has become so good at going to the basket and absorbing contact while still finishing that it’s almost expected every time now. Credit goes to him for putting the work in and to KU strength coach Ramsey Nijem for helping Wilson build a frame that can withstand those hits, allowing him to play to that as one of his top strengths. The KU sophomore hit 5-of-9 shots in this one and grabbed 6 rebounds while dishing 3 assists. All of it in just 20 foul-plagued minutes. KU would like to see Wilson find his outside shot again (1-for-4 in this one), but he has become so good at so many other things — not the least of which is not forcing those shots — that it almost feels like if he finds it it’ll merely be a bonus.

5 – Christian Braun – Braun hit a couple of 3-pointers late and was 4-of-5 from distance on the night. But outside of that, I didn’t think this was one of his better games. He struggled to get going early, with both his mother from the stands and Kansas coach Bill Self getting on him early. And he made just 5-of-12 shots. Even some of his drives to the basket ended with him fading away from the rim instead of exploding to it. You might be able to chalk this one up to the late tip and all of that waiting. But there are a lot of guys who would kill to have Braun’s “off nights.”

6 – Ochai Agbaji – Agbaji didn’t shoot it great (5-of-14 overall and 1-of-5 from 3-point range) and finished with just 11 points while also coughing up five turnovers. While everyone in white was a little rusty early on, Agbaji appeared to be the one who had the hardest time shaking it off. He scord some easy baskets and did his usual damage above the rim on lobs. He also played hard, grabbing six boards in a team-high 32 minutes. On a lot of nights, we might look at this performance and try to dissect it and find out what was off. On this night, when Kansas didn’t need him to do much, we throw it away as a freebie for the Jayhawks, who will need bigger games from Agbaji going forward but did not have to sweat out one of his more average games in this one.

7 – Mitch Lightfoot – He played 7 first-half minutes with a brace on his left knee and actually looked pretty good. Most importantly, he looked like he was pretty comfortable and like he trusts the knee. His and-one bucket (and the free throw) came on a strong move in the post and led to a spirited celebration from the KU big man. He also grabbed 4 rebounds in his limited minutes and dished one assist. KU not needing him for more than 7 minutes was the perfect scenario. He got to test it out and see how it felt at game speed but did not have to worry about doing any additional damage to it. Now he gets another 36 or so hours to rest it and, more notably, KU gets a matchup where it might not need another big beyond McCormack.

8 – Jalen Coleman-Lands – He played just 7 minutes, but I liked almost every one of them. Why? Because, once again, Coleman-Lands did what he’s out there to do. He hit 2 of 3 from 3-point range, including a fun one just before the halftime buzzer, and added a couple of rebounds, a couple of fouls and a couple of turnovers. You can always ask for more from just about any bench player. And Coleman-Lands being able to provide KU with a little more will be important going forward. But as long as he keeps shooting when he’s open and moving it when he’s not, he’ll be doing what they want him to do.

9 – KJ Adams – Another guy who plays and tries so hard, one of the coolest things to watch with Adams is how much he shows his displeasure with himself after he doesn’t make a play. He had a couple of moments like that in this one, but was only out there 7 minutes, so it was tough to expect too much from him. He did grab a couple of boards, including a nice offensive rebound, and did not force any shots. His lone turnover was on a charging call after a thread-the-needle pas by Martin left him with nowhere to go. I thought the pass was perfect. Catchable and on time. I’d have liked to see Adams go straight up immediately to hang for a little jumper instead of trying to bowl toward the basket.

10 – Joe Yesufu – Finished with three fouls, one rebound and one assist in his 10 minutes and, for the most part didn’t do much. As those numbers suggest. His quickness is at its best when Joe’s playing with a confident demeanor. And I saw him make one move tonight — right in front of me — that was so quick it felt like I blinked and he was gone. That could be an indicator where his confidence currently sits. And as long as he stays where he needs to be in his mind, he’ll be in position to contribute on any given night.

11 – Zach Clemence – Forced up a bunch of shots (1-for-7), was in the wrong spot on a couple of occasions and just generally didn’t do much with his 9 minutes. He did play hard and grabbed 3 rebounds and dished 3 assists. But the mistakes outweighed the contributions in this one. Still, it was good for him and Adams to get some extended minutes on a stage like this. They’ve both stayed and been ready all year and now they don’t have to worry about the jitters that come with playing in their first NCAA Tournament game. Been there. Done that.

Matt - Is this more of the Remy you were expecting in “He will, He won’t, He might”?

He will leave his man

He won't cover the wing