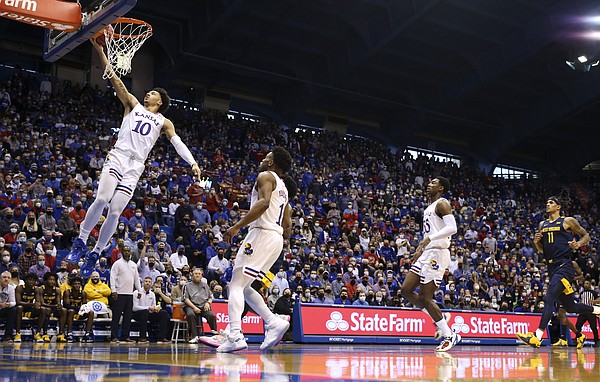 Kansas forward Jalen Wilson (10) gets in for a bucket against West Virginia during the first half on Saturday, Jan. 15, 2022 at Allen Fieldhouse. by Nick Krug

1 – Jalen Wilson – Pick a statistic and there’s a good chance Jalen Wilson was the best in the game at it on Saturday. He shot well, passed well, ran well and rebounded well. He even swiped a couple of steals and, believe it or not, could’ve played even better. Still, it was a monster game for one of last season’s top players and it even featured the return of his swagger in certain spots. He should keep starting, and if this is just the beginning for him, he’s got a heck of a run ahead.

2 – David McCormack – Ten offensive rebounds and 15 total. Nineteen points on 9-of-13 shooting. Only one of those shots was what would be described as a bad shot. And even that one provided a learning opportunity. After McCormack caught a pass on the right block and tried to back his way into the lane, he was moved out past the free throw line and took the fadeaway shot anyway. It missed and KU coach Bill Self immediately told him, “too far.” You’ve heard Self talk about guys playing to their size? Other than that one instance — and maybe a 15-foot jumper that missed early in the shot clock in the second half — McCormack played to his size brilliantly in this game. He scored at the rim, using his chest and shoulders to clear out space and find easy baskets. And he attacked the ball when it came off the rim after misses. Mindset, mindset, mindset. Those are the three keys for McCormack the rest of the way. Play free, play fierce and have a little fun along the way.

3 – Ochai Agbaji – Made 8 of 17 shots, including 4 more 3-pointers. Got on the glass again to the tune of 7 rebounds. And he scored in spurts and streaks when this team needed him to, in both the first and second halves. It’s been clear that Agbaji is the Jayhawks’ most consistent scoring option, but what’s became clear today is that he can still hit the 20-point mark on a day when others go off, as well. On most days, a line like Agbaji’s 20 points and 7 rebounds would’ve easily grabbed the top spot. That’s how good McCormack and Wilson were on Saturday.

4 – Dajuan Harris Jr. – Forget about the three fouls — especially the third one; that was a bad one — Harris delivered five assists and no turnovers in Saturday’s win, which was made a little easier by the way his teammates shot the ball but still should not be taken for granted. His 3-of-5 shooting performance for six points was merely a bonus. He still needs to become more disruptive on defense, but, again, zero turnovers by your point guard in 25 minutes.

5 – Christian Braun – Didn’t shoot it well (3-of-10) and a lot of those misses were in close, where Braun has been almost automatic so far this season. But his made up for it by grabbing six rebounds, dishing five assists and blocking five shots. The four turnovers eliminated some of the goodwill brought about by those numbers, but CB was a big part of the Jayhawks’ transition attack in this one and his competitive fire, which is seemingly always there, was a big part of the big second half, especially when you consider that he played 34 minutes in the win. That no-look, dropped-in-the-bucket dime to Agbaji in transition was one of the top plays of the day, too.

6 – Joe Yesufu – Grading on a bit of a curve here, Yesufu had one of his best games as a Jayhawk to date and, therefore, deserves this spot. He was more aggressive than usual, which was a good sign, even if he missed all five shots he attempted. And he dished four assists while occasionally manning the point by himself with Dajuan Harris Jr. in foul trouble and Remy Martin in street clothes. The signature play of Yesufu’s day — and a big reason he was able to top the 12-minute mark — came after he had the ball ripped from him while bringing it up on offense. Rather than sulking or giving up on the play, he busted his butt back to prevent the breakaway layup and wound up forcing a miss that led to a turnover, giving the ball back to KU. Self can live with mistakes as long as you’re playing hard and giving it all you’ve got. Yesufu did that today. The next step is figuring out ways to score.

7 – Jalen Coleman-Lands – Made a big shot late right in front of the KU bench — only big because it was so wide open — but didn’t do much else on the stat sheet in his 9 minutes. His maturity and athleticism make him a trustworthy option in Self’s eyes, but he still needs to figure out those little intracacies of how to consistently play winning basketball at Kansas.

8 – KJ Adams – Sometimes, tracking the world through the prism of Kansas basketball can lead to some pretty confusing moments. Think about this: A guy who was worth starting in KU’s last game four nights earlier could barely get off the bench in this one. KJ Adams was the last scholarship guy to check in for Kansas in this one, but he — yet again — instantly flashed with his energy and try-hard efforts. That only led to 6 minutes of PT, but he scored a point off of his decision to attack the basket and also dished an assist in those 6 minutes. Better days ahead. The best thing about Adams thus far is that he never seems to take steps backwards, no matter what kind of opportunities he is or isn’t getting.

9 – Mitch Lightfoot – Lightfoot hit a pretty big and-one bucket late in the first half that helped KU grab a lead at halftime. But he didn’t do much else on the stat sheet in this one, as reflected in his -13 plus/minus number for the game. The closer KU gets to figuring out its regular rotation, the quicker Lightfoot will be able to fall back into the role that best suits him — backup big that battles and backs down to nobody.

10 – Bobby Pettiford – Self uttered the words “Bless his heart” when talking about Pettiford after the victory. It’s not that the freshman guard shouldn’t be out there because of that abdominal injury, but rather because being out with the ab strain (not to mention COVID) kept him from progressing and developing within the flow of the season. Missed his only shot, turned it over twice and fouled once in 3 minutes. He still has time to find his footing, but it won’t happen overnight.

Kansas coach Bill Self on the win over West Virginia & an update on Remy Martin at the end by KUsports.com

MATT - Excellent comments - Your best ever!

In terms of his impact on the conference standings, I think that Bryce Thompson's 19 points should get at least an honorable mention!