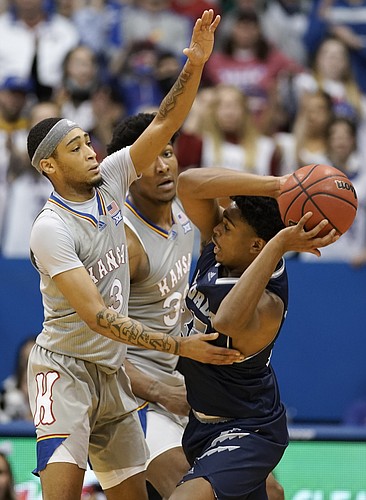 1 – Dajuan Harris Jr. – Grading this one on a bit of a curve because of what the Jayhawks expect from Harris on any given night, his career-high of 14 points and perfect shooting made him by far the most efficient player in KU blue on Wednesday night. He added five assists and two steals and never looked to deviate from his preferred style of play, which is to set up others before looking for his. In this one, he took the open shots and made them. If he’ll do that consistently, KU’s ceiling will go up.

2 – Christian Braun – Broken records be damned, Braun again led with energy, heart and passion, putting together a stellar first 10 minutes and then coasting a bit from there. He led all scorers with 22 points and once again blocked a couple of shots while finishing with a whopping +35 number in the plus/minus category. Talk about a guy who is absolutely locked in and loving it. Not even a wonky schedule and 11-day layoff could slow him down.

3 – Ochai Agbaji – Lots of dunks and another game of 16 points or better. Agbaji has now hit for at least 16 points in all 11 KU games so far this season. In this one, he shot 7-of-12 from the floor and got the total despite making just one 3-pointer.

4 – Remy Martin – Martin showed improved effort on defense early, which was a good thing because he shot just 3-of-7 from the floor. Regardless of the numbers, he still provides KU with so much potential when he’s out there and he made a pretty good impact in just 22 minutes.

5 – Jalen Wilson – Another step in the right direction for Wilson, who finished with 7 points and 10 rebounds in 21 minutes off the bench. It’s coming. It might still be slow coming, but you’re starting to see glimpses of him getting a little more comfortable and finding a little of that 2020-21 swagger.

6 – David McCormack – The big man shot 6-of-10 from the floor and grabbed 6 boards in a game that featured a couple of true 7-footers. It might not have been much to write home about, but it wasn’t anything to groan about either. McCormack scored some legit baskets in the post and appeared to play hard all night.

7 – KJ Adams – His spurt at the end of the first half was arguably as good a 2-minute stretch as any Jayhawk had on Wednesday night. The numbers aren’t there, but Adams doesn’t care about that. He just wants the opportunity and when he gets it, he’s usually ready. He’s got a chance to play an important role moving forward.

8 – Mitch Lightfoot – Even his best moment of the night was actually a better play by someone else. Dajuan Harris’ transition drop-off pass to Lightfoot that was so soft and so sweet led to a two-handed hammer dunk and a big smile for the KU big man. Outside of that, he didn’t do much else on this night. But KU didn’t really need him to either.

9 – Zach Clemence – The freshman showed that he has a nose for the ball by grabbing three rebounds and scoring on a put-back. He also had a 3-pointer blocked during an up-and-down kind of night packed into just 5 minutes of PT.

10 – Jalen Coleman-Lands – The senior shooter was one of the first three players off the bench but he logged just 6:15 of playing time and didn’t have much else to show for his night. He finished 1-of-4 shooting overall and 0-of-2 from 3-point range.

11 – Joseph Yesufu – Played just five minutes and fouled twice and turned it over twice. Still not there.

At the end of the year, what's the prize for the first place guy?

A foot massage from Matt.