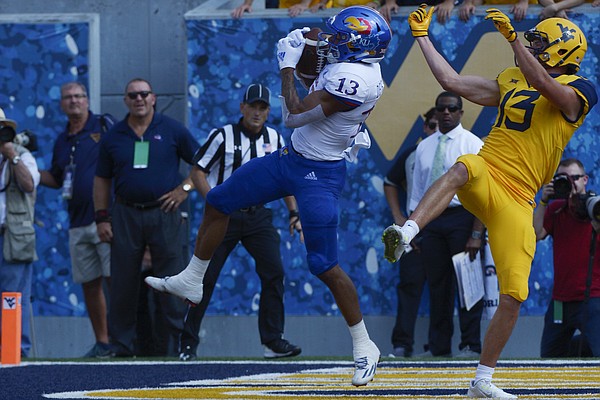 It’s been so long since Kansas has led the nation in a positive football statistic I find myself visiting cfbstats.com to click turnover margin on an almost daily basis. Never know when it might happen again, so why not? You should try it. It's good therapy.

Remarkably, the Jayhawks still lead the nation in that category with a weekly average of +2.17. They have 18 turnovers gained and five lost, six weeks into the season.

Beaty's first game as offensive coordinator since 2016 is Saturday in Lubbock, Texas.

As always, Beaty is stressing “being a smarter team. We’re right around the middle of the pack in the Big 12 right now, and we need to be in the top three, if not better than that.” In conference play, KU has five takeaways and four turnovers.

When Beaty was at the helm of the Kansas offense in 2016, the Jayhawks led the nation with 36 turnovers. KU runs the ball far more now than then, so reducing that number significantly shouldn't be a problem.

The defense is doing its part in the turnover department.

KU had four interceptions all last season and has 11 so far this season, tied for fifth in the nation. Hasan Defense has two picks, both against West Virginia, and 10 players have one apiece: Joe Dineen, Davon Ferguson, Corione Harris, Elmore Hempstead, Mike Lee, Jeremiah McCullough, Shakial Taylor, Ricky Thomas and Bryce Torneden.

Suddenly football doesn't seem that important to me anymore.

Play out the season, hire a new coach and start over again.