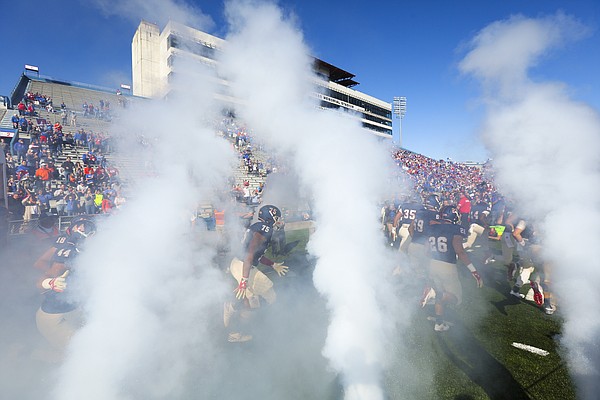 Kansas offensive lineman Antione Frazier (75) and the Jayhawks head out to the field through the smoke prior to kickoff on Saturday, Oct. 22, 2016 at Memorial Stadium. by Nick Krug

The NCAA allows Football Bowl Subdivision schools to carry 85 players on full scholarships. When schools fall short, they award scholarships to walk-ons. The limit for any one class is 25.

Because of career-ending injuries, academic flameouts, transfers to other schools, etc., most schools have rosters with fewer than 80 players who originally came to the program on scholarship.

Kansas, for example, has 77 players on the roster who originally came to school on football scholarships, although that number includes two Class of 2018 recruits who verbally committed but did not sign letters of intent. Also the number is likely to be smaller by the time the 2018 season starts, and in fact likely already is smaller. KU, however, has not updated its roster. The 77 figure includes offensive tackle Charles Baldwin, who did not practice with the team for most of the season as a disciplinary measure. Is he still in the program? He's still listed on the roster. It also includes a couple of players with concussion histories who might or might not be able to continue their football careers.

Having 77 original scholarship players isn't a bad number, but the class balance is not ideal. At the moment, the 2018 roster projects as having 15 freshmen, 14 sophomores, 27 juniors and 21 seniors.

Identifying six or so players from the junior class to spend this coming season as redshirts would result in better balance, with a breakdown of 14, 21, 21, 21.

You never want to redshirt a player unless you think he can make his way onto the depth chart as a first-string or second-string player because there is no point of keeping a non-contributor on scholarship an extra year. It wouldn't be tough to find a half dozen juniors who have the potential to benefit the team by preserving a year of eligibility to develop their skills and physiques. Six defensive backs who have not yet used a redshirt season are in the class, so three could come from the secondary. Combining offensive and defensive linemen, nine candidates are available, from which three could be earmarked for redshirts.

Not that it matters because I get the point but teams normally dont award scholarships to walk-ons because they fell short of the 25 in signing class but because they are below the 85 on the roster.

What's the update on Bean?

Tom is just goading Beaty, which is pretty funny. Obviously it's all-in for 2018, with no worry about future consequences.

Except there isn't a "future consequences".

Recruiting 20 HS and 5 JC in each of the next classes leaves us with 20, 20, 20, 20. A completely balanced class. It's amazing how looking at actual facts can be enlightening.

End of drama story. No consequences.

Tom, I have an idea. Go out and give 6-8 more scholarships this year to track athletes that may not have been big football players, a really fast point guard that can't shoot but can be converted to a DB, and/or really big dudes that may not have blossomed due to lack of a weight program or competition, and see if you can actually coach them up. Sign a couple of skinny 6' 5" tight ends and lock them in a food pantry & weight room. See if one can put on enough weight to be a linemen. There is NEVER a reason to leave a scholarship in your pocket. A scholarship in your pocket does you no good. They are one year renewable. Tell them up front they are a prospect and see what happens.

Beaty can't even coach up actual football players; you think he'll be able to coach up non-players???

Not really, but my point is you never leave a scholarship in your pocket. That's just dumb.

Nobody is leaving scholarships in pockets. We have never done that in the Beaty era lol.

All the FBS coaches Beaty faces understand that it is a fireable offense to lose to a 3-33 HC. Rutgers, TTU, Baylor,WVA & Texas will bring their A games. Herbert & Sims must absolutely be healthy if KU is to win even 1 game.

There's 7 walk-ons for 2018 and there was an equal number for 2017. If they are still with the program after two years, some should receive a scholarship for their efforts and potential.

John, I think after you put them on scholarship, you can't revoke the scholarship a year later and still have them play as walk-ons if they were recruited in any way. So it's in a way career-ending to give a scholarship to someone if they aren't going to play and you'll later revoke it.. I'm not sure how many of the football walk-ons didn't receive any official recruiting, but that could be one factor.

Back in the day, we had jokes about "Brady Morningstar's dad can pay his way," and he COULD have if Brady had never been recruited and been a walk-on for 4 or 5 seasons... but Brady was recruited.

Travesty that guys like Malik Clark & OT Frazier & Cam Durley are juniors when they have a combined 50 plays among them. Mismanagement. They played a combined 12 plays as freshmen. What a waste of huge linemen that should have been redshirted.

Uhhh Frazier has way more than 50 plays and Durley is a sophomore.

Wasn't Clark redshirted as a freshman?

At this point, it is probably late to be recruiting more players to this class, though there are only 20-ish players. That being said, I think there have been a few have joined the team this way. Hakeem Adeniji in particular IIRC.

Rather than redshirting players this year, I believe you can count some players recruited in December 2018 as part of the 2018 class. If they were JC's, it would have the same effect without diminishing the Jr or Sr classes or reducing available players. 5 JC's and 20 HS players sounds like the ticket to a balanced roster.

Hmmm, maybe the JC heavy class isn't nearly the problem that was initially slurred around the recruiting discussions. Maybe the writing is more suspect than the coaching.

There are always more players to recruit. Look outside the box and find them. Keeping a scholarship in your pocket is never good.

Unless Joe Mortensen or Akeem Adeniji or ... become available. Both weren't part of the regular recruiting class signed in February. There have been others.

Hmmm, maybe keeping a scholarship in your pocket can be a good thing if there aren't P5 players available.

How many of the underclass men will stick around after Beaty and Zenger are fired?

Tom, thanks for this article. We've all been wondering where we stand on scholarships, and this helps clear that up.

This also tells me two things:

2. Look at the numbers of freshmen and sophomores. Looks like we haven't been able to attract high school kids for the last 2 years.

Coach has been doing a really good job of rebuilding the roster, and this article actually undermines the faulty premise that had previously been stated about future classes being decimated by the number of JC players in recent classes. We're real close to where we need to be on the roster. Now that we're getting some depth and experience across the board (vs. last year's situation in the defensive backfield) the game results should also improve.