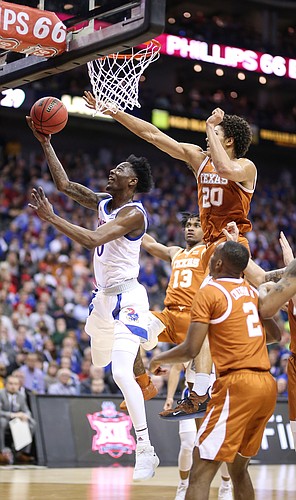 Kansas guard Marcus Garrett (0) ducks under Texas forward Jericho Sims (20) for a bucket during the first half, Thursday, March 14, 2019 at Sprint Center in Kansas City, Mo. by Nick Krug

Kansas City, Mo. — For the first time since January, Kansas sophomore Marcus Garrett looked like himself.

Garrett played 20 minutes during KU’s 65-57 win over Texas in the Big 12 quarterfinals Thursday night at the Sprint Center. Garrett was active on the glass, while handling a huge responsibility on the defensive end.

In the locker room after the game, Garrett wasn’t ready to put a percentage on where he is health wise. But he did feel like he was on the right track, which is great news for a young Kansas team during the postseason.

“This is probably the closest I have been to 100 percent,” Garrett said.

Garrett sustained a high-ankle sprain during practice on Feb. 1, putting him on the shelf for five games.

“I was just having constant treatment to get back as fast as I could,” Garrett said. “It was challenging.”

Even when Garrett returned, he was a lesser version of himself. Garrett has played in six contests since returning from the injury. Garrett has yet to play more than 27 minutes in a game after playing at least 30 minutes in six of his eight games before the injury.

Thursday’s win over Texas was a different story, however. Garrett collected a season-best eight rebonds, all of which came on the defensive end. No other KU player posted more than five defensive rebounds.

Garrett was also matched up Kerwin Roach II for much of the time he was on the court. Multiple guards ultimately got a chance to guard the Longhorns’ leading scorer. Roach, who finished with eight points against KU, was averaging 15 points per outing entering the quarterfinals.

Yet, it was a play on the offensive end that made Garrett realize he was getting closer to being what he once was.

Late in the first half, Kansas pushed the ball in transition off a Texas turnover. Garrett filled the gap correctly, and freshman point guard Devon Dotson hit him in stride. Not only did Garrett jump off his left foot, but he demonstrated great body control through traffic.

It was a significant play given what happened in a similar situation less than a week ago.

Midway through the second half against Baylor in the regular-season finale, Garrett ran down the right side of the court on a fast break. Charlie Moore recorded a steal and then fired a pass to Garrett in transition.

For a moment, it looked like Garrett was going to get a layup at the rim. Instead, he shied away from jumping and ultimately was fouled.

It may seem like a minor thing, but it is important given how Garrett gets a majority of his points. Garrett has just made four shots at the rim in the six games since returning from the injury, according to Torvik. Prior to that, Garrett netted 38 buckets at the rim in 20 games.

“I thought I was going to get to this point sooner,” Garrett said. “With it being my first ankle injury, I didn’t know how serious it was. I just thought I would be back."

But Thursday's performance was the first sign that Garrett is on the right track to being fully back.