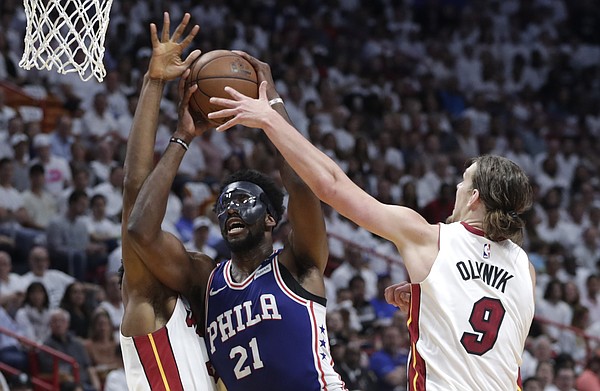 It wouldn’t really feel like a true Joel Embiid milestone without some maddening injury putting it behind schedule. So, appropriately enough, the often-wounded, rarely-dispirited Philadelphia center made his NBA Playoffs debut three games into his team’s opening-round series Thursday night in Miami.

Although the former Kansas star, who never played in an NCAA Tournament game back in 2014 due to a back injury, missed the last three weeks and the 76ers’ previous 10 games due to an orbital bone fracture near his left eye, a masked Embiid returned to the lineup to lead his team to a road victory in his postseason launch.

Sure, the Sixers’ star appeared both obstructed and frustrated at times by the protective shield strapped to his face. Even so, Embiid, while showing some rust, managed to pour in 23 points on 5-for-11 shooting, nail 3 of 4 from 3-point range and provide 7 boards, 4 assists and 3 blocks in 30 minutes of a 128-108 win.

The first five field-goal attempts from the recovering big man misfired before he got on track just before halftime, first by knocking down a 3-pointer, then converting through contact on a smooth up-and-under.

“I am just so proud of what he did on the court,” Philadelphia coach Brett Brown said after Embiid helped the team take a 2-1 lead in the best-of-seven series. “Take the real situation of not only was he injured, and not playing basketball, but now you’ve gotta come back in on the road and play a playoff game with a mask. And it’s not like there’s a clear vision line out of the mask. It has a protective lens in there, as well. And for him to come back under those terms and in that situation and produce the numbers he produced, and help lead us to a road playoff win, I’m very, very proud of him.”

As indestructible as the mask’s components proved to be — Miami’s Justise Winslow purposefully stepped on the goggles portion when it popped off to no avail — The Inquirer’s Keith Pompey reported Embiid had to use three different masks during the course of the game as the protective gear suffered damages significant enough to warrant replacements.

None by Jeff Eisenband

“It was annoying,” Embiid said, “but that was the only way I could play in this game, was if I was going to wear the mask and protect my face with the goggles. So I had to work through it, and I did, and we got a pretty good win.”

As for Winslow’s ploy to potentially destroy the mask and perhaps sideline Embiid as a result? Well, the Philly center got a kick out of that.

“Little do they know that I have about 50 of them,” Embiid said. “So it’s gonna take much more than that to get me out of the series. And I’m gonna be a nightmare for them, too.”

The Sixers took a 2-point lead into the fourth quarter before putting Miami away on its home floor down the stretch. In the final five-plus minutes, Embiid drilled a fade-away jumper off the glass, knocked down a 3-pointer, blocked a shot and sent in a pair of free throws, before checking out with his team up 16 points.

Go ahead then, @JoelEmbiid! #PhilaUnite pic.twitter.com/8tmCJvPpoS

“It meant a lot,” Embiid said of finally appearing in his first playoff game, close to four years after the 76ers took him No 3 overall in the 2014 draft. “I feel like I’ve been here, went through everything. The year we only won 10 games (2015-16) it was really disappointing. So we went through a lot, and to be able to be in this position, I’m really happy about it. I’m really happy for coach, finally has a team and is coaching us well. He deserves a lot of credit and I feel like he should be Coach of the Year, too. But I was excited. Worked really hard for it and promised the city that. Made it happen. And I was kind of sad that I couldn’t play in the first game or at home, because we have a special connection. But I’m glad I came back today and we got a win.”

None by Yahoo Sports NBA

The @sixers quiet the Heat in Miami to take a 2-1 series lead! #NBAPlayoffs#PhilaUnite pic.twitter.com/Wp9HhxFEOc

Only Anthony Davis (19) has more such games spanning the 2017-18 regular season and playoffs. pic.twitter.com/vTJuUyP6Xi

Embiids first career postseason game. The first of many.

JoJo is a hall-of-famer if he stays away from injuries throughout his career.

A special athlete. He showed what level of quickness, skill and agility is required for a NBA center, not to speak of his mental toughness.

Mercy , what can you say other then - -that's our boy/ well man I mean. - -Mercy dang back, and to think JO JO actually didn't want to leave KU but Coach Self advised him otherwise lol