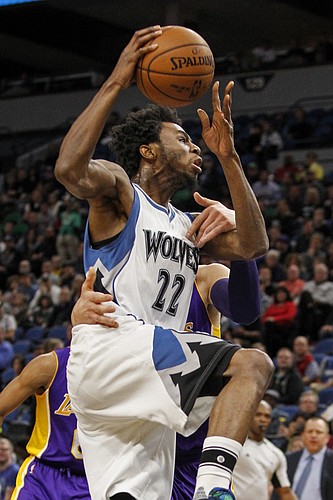 Minnesota Timberwolves forward Andrew Wiggins (22) drives to the basket and is fouled by Los Angeles Lakers center Timofey Mozgov (20) in the first half of an NBA basketball game, Sunday, Nov. 13, 2016, in Minneapolis. (AP Photo/Bruce Kluckhohn)

You probably already knew former Kansas standout Andrew Wiggins was a better NBA player than many around the league. Take, I don’t know, every player who starts for the Los Angeles Lakers, for example. Wiggins is definitely better than Julius Randle, Luol Deng, Timofey Mozgov, D’Angelo Russell and Nick “Swaggy P” Young, right?

As if we needed any confirmation of this fact, Wiggins provided it Sunday by scoring a new career-high 47 points — as many as the Lakers’ starting five combined.

The Timberwolves’ ever-improving wing would’ve reached 50 points — and outscored L.A’s starters by himself — had a late 3-pointer not misfired.

“Not as bad as me,” Wiggins said afterward.

One of the crazy factors in the 6-foot-8 small forward’s massive night is he reached 47 points with just two of five 3-pointers falling through the net. Keep in mind: Wiggins actually leads the league in 3-point shooting (17-for-31) at 54.8%.

Wiggins quickly eclipsed his previous career high of 36 — set less than a week before against Brooklyn — by working the Lakers over with his jumper and getting to the paint, making 14 of 21 shots overall. 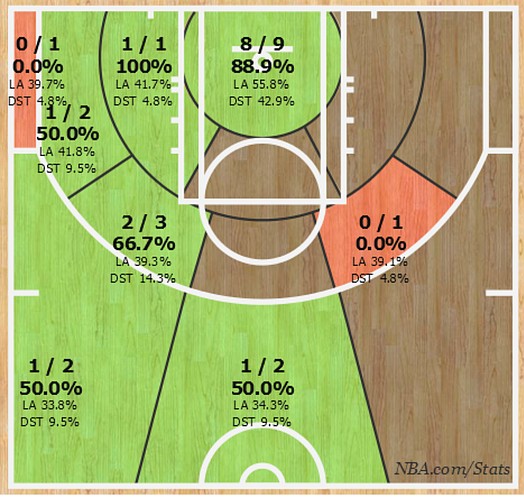 Plus, he lived at the free-throw line, what with the Lakers’ inability to stop him offensively. Wiggins shot 17-for-22 at the charity stripe — both easily season highs — to improve his season free-throw shooting percentage to 74.1%.

The offensive explosion came on the second day of a back-to-back, after Wiggins attempted more shots (8-for-24) in a 22-point effort against L.A.’s far superior team, the Clippers.

“I shot 24 times yesterday and Coach Thibs (Tom Thibodeau) told me to be more aggressive,” Wiggins told the Star Tribune. “So I said, ‘All right,’ and I just went for it.”

There are still months to play in the season, but at this juncture Wiggins qualifies as one of the NBA’s better scorers. Averaging 26.3 points a game, he ranks ninth in the category. Still, Thibodeau sees even more potential in his 21-year-old wing.

“He’s smart. He’s driven,” the first-year T’wolves coach told the Star Tribune. “I think sometimes people mistakenly take it that he’s laid back. He’s competitive. He’s just scratching the surface. I think he can be a lot more. … I don’t want to put a lid on it. It’s what he wants it to be.”

Minnesota (3-6) has another future all-star in Karl-Anthony Towns, but the franchise could use an assertive Wiggins carrying much of the scoring load as the team tries to reach the NBA Playoffs for the first time since 2004.

Though it seems inevitable, the Timberwolves still have quite a journey in front of them before they can reach the upper echelon of the Western Conference, and that day likely won’t come for a couple more seasons. Once they get there, though, games like this one from Wiggins will qualify as key milepost markers along that pilgrimage.

When your homie sets a new a career-high with 47 points... #PowerOfThePack https://t.co/hvzHeR1BA0