Tarik Black didn’t play nearly as much in his second season with the Los Angeles Lakers as he did as a rookie.

But the 24-year-old who spent his final season of college basketball at Kansas isn’t complaining.

For one, Black had both a courtside seat and an on-court role in a historic performance by Lakers legend Kobe Bryant, who scored 60 points in his NBA finale for the downtrodden franchise.

Black, a backup center for L.A., is one of the few players not named Kobe Bryant who can say he made a highlight-reel play during the Mamba’s farewell show. The 6-foot-9 big man went up high to deny Rodney Hood a jam, setting up a Showtime-worthy fast break for the miserable Lakers (17-65, worst record in the Western Conference).

During Black’s exit interview with L.A. media members, he said the young players on the roster unified in making Kobe’s last game memorable for everyone who watched it.

“It definitely sparked something for us and opened our eyes to something that previously we hadn’t focused in on, and it happened to be Kobe Bryant’s last game, and doing whatever it took for him,” Black said.

Consequently, Black understood the franchise had to do everything within its power to try and determine which direction it is headed, post-Bryant. That likely led to a dip in Black’s minutes.

After starting 27 of his 38 games with the Lakers in 2014-15 and averaging 21.1 minutes, Black appeared in 39 games during his second season, logging just 12.7 minutes as a full-time reserve. He spent a chunk of the season inactive and never checked in during 22 games in which he suited up.

On the year, Black averaged 3.4 points and 4.0 rebounds — both numbers down from his rookie averages with the Lakers: 7.2 points and 6.3 rebounds. 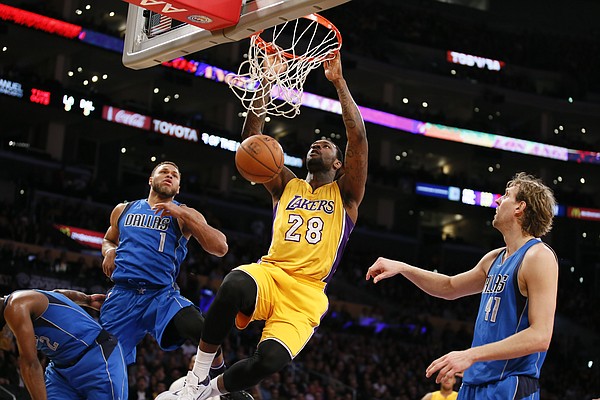 “They’re rebuilding,” Black said of the Lakers. “They’re finding out slots, they’re finding what players work best together… because we’re trying to build this thing back up. It’s tough, definitely. But that’s something that’ll inevitably be said, that it’s tough. You need minutes. But at the same time I understand, because you’re trying to find out: What is the dynamic of this team? Who needs to play together? What spots need to be filled? That’s what we’re finding out right now. We’re just going through the process.”

Although Black only spent 496 minutes on the court for L.A. this past season, a small sample size for sure, basketball-reference.com shows that the Lakers’ team numbers improved with the second-year center in the lineup.

Of particular importance to Black, L.A.’s rebounding percentages improved when he played, while the Lakers’ opponents saw their rebounding success drop off.

If Black returns to the Lakers next season (more on that to come), there are some aspects of his game L.A.’s brass would like to see him address. According to the young post player, his season-ending exit interview with the organization included a list of areas that needed improvement, while they also see potential in him.

“One of the big things for them was finding consistency on the floor — consistent energy and consistent tough play,” Black revealed.

Early in his second season, coach Bryon Scott (who may not be around much longer with the Lakers) urged Black to unleash the “beast” or mean streak within him. The center thinks he got closer to doing that in his limited minutes.

“I believe it’s about being comfortable, finding your comfort on the floor. I definitely play hard. I don’t think anybody questions whether I play hard… But it’s a controlled ‘beast.’ You don’t just go out there and just run crazy. You have to understand what you’re out there on the floor to do, the spots you need to be in in order to do it,” Black said.

“And I think, for myself, I’m a second-year player, too. I’m one of the younger guys, as well. So it’s still a learning process for me and it’s still, even in being an energy guy or taking on that role, I still need to learn exactly what that means,” he continued, “and find my spots and comfort on the floor in order to truly define that.”

The mostly youthful Lakers roster included eight players with three or fewer seasons of NBA experience. Black added, with a large smile, that his name came up with the younger guys during his end-of-the-year meeting. The former KU big indicated he thinks he’ll move forward with that young core.

However, there is no guarantee that will be the case. Black — who according to HoopsHype.com was the 421st-best paid player in the NBA this past season, earning $845,059 — will become a restricted free agent this summer.

When July finally rolls around, and Black is free to talk with other franchises, as well as the Lakers, about his next contract, he isn’t sure what to expect.

“It’s gonna be different, but that’s what makes life interesting, honestly,” Black said. “That’s what makes it worth it. Things like this, the dynamics, the ups and downs and just what’s the next chapter, what’s about to happen. I’m interested to see what’s gonna take place. I haven’t thought about it too much, honestly, because I’m not gonna stress myself over it. Plus, we just got done with our season.”

Class act, smart dude, head in check, and good enough to play in the league. Pretty cool stuff for the one year guy from Kansas.

I'm a huge fan of Tarik, will continue to watch him and cheer for him. Classy, humble, and hard-working--can't beat that.