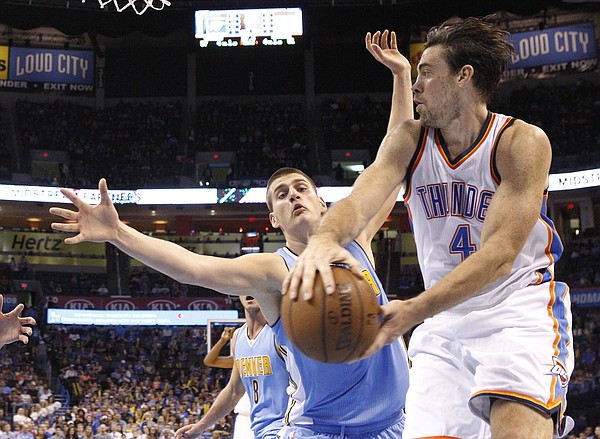 With 11 seasons of NBA experience behind him, veteran power forward Nick Collison isn’t the type of player a coach turns to to go score a crucial, last-second basket or to stop the opposing team’s best post player. But Collison just might be more important to the culture of the Oklahoma City Thunder than any other member of the franchise.

Collison, who averaged 4.1 points (career low), 3.8 rebounds (second-lowest average) and 1.4 assists for OKC in 16.7 minutes per game (tied a career low) last season, has reached a point in his basketball life when he knows younger guys are going to play ahead of him. Whether that’s an all-star caliber big man such as Serge Ibaka or an up-and-comer such as Steven Adams, Enes Kanter or Mitch McGary, that’s all right with Collison.

The former Kansas star, who just turned 35 on Monday, has been with the Thunder since the franchise relocated to Oklahoma from Seattle.

Even the face of the organization, Kevin Durant, has called Collison “Mr. Thunder.”

Congrats Mr. Thunder, such a honor to play alongside you @nickcollison4

None by Kevin Durant

So, no, new coach Billy Donovan won’t be drawing up a lot of plays for his aging reserve big man. But, yes, Donovan trusts Collison to turn all these young post players with OKC into better professionals.

Collison doesn’t deliver exciting highlight plays the way OKC’s young stars Durant and Russell Westbrook do, but it seems like all the players love the old guy. Just look at how much they enjoyed his epic Halloween/birthday party this weekend.

What’s more, Collison is the type of guy the organization can lean on to set the tone as a player and member of the local community. He was one of the many members of the Thunder who visited Monday with victims of the Oklahoma State homecoming crash at the OU Children’s Hospital and OU Medical Center.

Collison’s worth never gets lost on OKC general manager Sam Presti, who locked up the veteran big man through 2016-17. Presti described Collison as a flag-carrying member of the team who mentors the young guys coming through the program. The Thunder GM said he went this summer to visit Collison in Seattle and Adams was there working out with him.

“… Steven is like 23,” Presti marveled at the odd offseason partnership. “They're not watching the same movies, OK. But Collison is taking an intentional and active role. When I say building the organization, he's helping that guy. I think he's really invested in Steven and his success.”

The Thunder are considered one of the premier challengers for reigning NBA champion Golden State in the loaded Western Conference. And while outsiders don’t think of Collison when they think of Oklahoma City, everyone in that organization is grateful for what the old-timer brings.

My son went to several KU camps as a little guy. The second year I took him up there, the guys were signing autographs. He was in Nicks line. When it was his turn, Nick looks up, looks down to sign, looks back up and grins. He says, Adam, right? Blew my mind! How many kids he sees and remembered his name. Hell, I was on cloud nine! Let alone my boy. It all stemmed from a pick up game the previous summer when Adam and Nick played against Kenny Gregory and another camper. Kenny had Adam stand in the lane and he jumped over him for a dunk. What a cool time for us all.

Nice story, Steve; thanks for sharing.

Sounds like a coaching position is definitely in Nick's future.