All hail the king of dunk contest theatrics, Ben McLemore 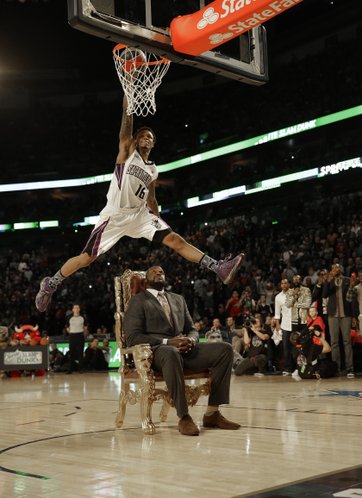 Ben McLemore of the Sacramento Kings dunks the ball as he flies over former NBA player Shaquille O'Neal during the skills competition at the NBA All Star basketball game, Saturday, Feb. 15, 2014, in New Orleans. (AP Photo/Gerald Herbert) by Gerald Herbert

Ben McLemore didn't win the slam dunk contest Saturday night in New Orleans — Dunker of the Night went to Washington's John Wall — but it wasn't due to a lack of theatrics or superb athleticism from the high-flying shooting guard.

The Sacramento Kings rookie, the only former Kansas player involved in the NBA's All-Star Weekend festivities, had the arena and Twitter abuzz when, accompanied by Shaquille O'Neal and wearing a regal robe, he paraded toward the court, where a throne sat conspicuously in the paint.

As Ailene Voisin of the Sacramento Bee put it, "Ben McLemore gave one of the more theatrical performances in Kings history."

Eventually, after the showy intro, McLemore got down to business — or would it be up to business in this case? — by leaping over the throne, occupied by Kings minority investor Shaq, and throwing down an impressive slam.

I don't know if TNT still uses the slogan, "We know drama," but clearly the combo we shall now refer to as Shaq-Lemore were happy to bring a flair for the dramatic to the broadcast.

Whether you love or hate all the spectacle, it was quite a dunk, and as Kenny Smith said during the broadcast, probably actually more difficult than Blake Griffin's dunk over the hood of a car a few years back.

“I was robbed,” McLemore joked to the Bee's Voisin, laughing. “I dunked over a chair and a 7-footer! That was creative. It was a great dunk.”


Before the main attraction, McLemore and his fellow Western Conference teammates, Golden State's Harrison Barnes and Portland's Damian Lillard, performed a series of jams in the freestyle round.

Prior to the contest, it turns out the man known as "The Human Highlight Reel," Dominique Wilkins, said McLemore was his sleeper pick. And Nique won the event twice, famously battling Michael Jordan on more than one occasion.

“That kid has a lot of bounce,” Wilkins said in a column by Voisin for the Bee. “I like his chances.”

The Kings rookie didn't have to go far for some dunk contest advice, either. Sacramento's player development director is Dee Brown, who won the all-star weekend showcase in 1991.

Voisin wrote that Brown often has worked with McLemore on another part of his game after practices, too. McLemore has "small and slender" hands and often struggles to maintain his grip.

So Brown had more to offer than, "Hey, kid. Just cover your eyes when you dunk."

As you can tell from McLemore's Twitter account, he was stoked to be a part of All-Star Weekend.

Just landed in NOLA! Be sure to watch me on 2/15 in the #SpriteSlam. Look at http://t.co/3mVskAmZcf NOW to see dunk highlight reels.

Appreciate all your support. Really man. You don't even know. Esp my Sac and KU people. #soblessed #myfansthebest #wheelsupflight16

Honored to be giving back in NOLA with @nbacares - cleaning up a school. So blessed to be at #NBAAllStar pic.twitter.com/syDnZJE7uh

Starts in 30 mins on TNT... RT @NBA: Getting ready for #SpriteSlam on TNT with @BenMcLemore pic.twitter.com/mTIYkVArRa

Appreciate y'all so much. https://t.co/Filut3ZRTd

To wrap things up, here are some pretty cool photos the Kings tweeted out from the competition.

Finally, check out a compilation of McLemore's best in-game dunks from his still young and promising career.

It's a shame that Wall went right after Ben, because otherwise people might have been talking more about Ben as having the second best dunk of the night.

And nice to see him exhibiting the same class and graciousness as always. What a great representative of KU!

honestly, that has Shaq written all over it. I suspect that whole sequence was Shaq's idea the whole time. Shaq had been campaigning for McLemore to be in the dunk competition for the last month or so and I suspect that he had that performance in mind from the beginning.

Ailene Voison says that she thinks that McLemore had to convince Shaq to participate and that they both had to get permission from Vivek Ranadive. She also indicated that she thinks that it was McLemore's idea to wear the robe. But that doesn't seem at all like McLemore's personality. Shaq loves the spotlight. Shaq loves to make a spectacle. And why would it take any convincing for Ranadive. It's easy and HUGE publicity for the organization. No brainer for Ranadive. Shaq can talk Shaq-ramento in front of the lights and cameras all he wants. All it does is create interest and put people in the stands and generate revenue.

Oh yeah, and it looks like McLemore cleared him by a good 30 inches. They should have had Dee Brown standing behind Shaq dressed as a knight in armor.