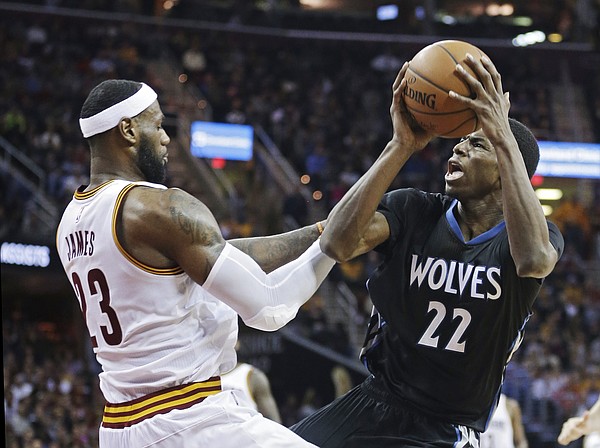 When he wants to, Andrew Wiggins can play with an edge.

In a three-game slump (6.3 points per game, 7-for-27 shooting) heading into the rookie’s very first meeting with the team that drafted him, Cleveland, and superstar LeBron James, the Kansas product indeed looked motivated to show the Cavaliers they should have kept him around — or at the very least remind them of what they’re missing.

Wiggins outscored LeBron, 27-24, (but not Kyrie Irving, who added 29 for Cleveland) and the leading candidate for rookie of the year made another highlight reel to add to his résumé by hitting 9 of 16 from the floor.

Though his Timberwolve (5-22) still had no chance at Cleveland (17-10), Wiggins Vined the Cavs’ defense on one possession with a jam that must have had Cavs fans wondering — maybe just momentarily — how the 19-year-old Canadian would look in wine and gold.

Showing more professionalism that bitterness or envy, Wiggins said in a column by The News Herald’s Jim Ingraham he isn’t holding any grudges toward Cleveland — a place he said earlier this week he called home for “like three days.”

“I’m being put in a bigger position, a bigger role (with Minnesota) than I would’ve been on that team,” Wiggins said. “That’s helping me grow more mentally and physically.”

Like Kobe Bryant earlier this month, the Star Tribune’s Jerry Zgoda reported, James had a glowing review of Wiggins, a potential future star in The Association.

“He’s a great talent,” James said. “We all knew that for sure. He’s very poised and very efficient. They got a good piece.”

After the 125-104 loss, the Timberwolves’ sixth in a row, Wiggins reiterated the matchup with Cleveland, who picked him No. 1 overall in June, then moved him in a trade to land Kevin Love, provided added inspiration.