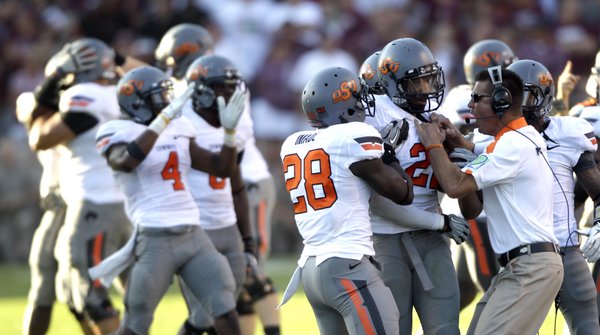 I feel the need to issue digital props to Oklahoma State fans for showing some conference pride this weekend in College Station, Texas.

In a riveting, back-and-forth battle between top 10 teams, No. 7 Oklahoma State held on for a 30-29 victory over No. 8 Texas A&M on Saturday at Kyle Field.

After securing the victory, visiting Cowboys fans apparently wanted to let the home team know what they thought about the Aggies' departure to the SEC, which was made official on Sunday.

I wondered last week, with college realignment rumors flying around by the minute, if any conference pride still existed from Big 12 fan bases. Clearly, recent developments of Big 12 stability — the conference ousted Dan Beebe as commissioner, and announced a plan to bind the remaining nine schools together by holding their TV rights if a school tries to leave — has re-energized Big 12 fans. That much was evident on Saturday in College Station.

CBSSports.com's Dennis Dodd said that was the first time he heard a Big 12 chant in his 16 years of covering the league.

When it comes to conference chants, everyone knows how that tune plays out. Look, I roll my eyes as much as you do with the "S-E-C, S-E-C!" ear-bleeder, but when you've won the previous five BCS Championships, there's really nothing we can do to take away from the SEC's dominance of college football. The conference's schools have beaten teams from the Pac-10 (Oregon), Big 12 (Oklahoma, Texas) and Big Ten (Ohio State twice) since 2006, so as far as I'm concerned, their fans can chant all they want.

The Big 12 needs more of these moments, though, especially in a time the conference is starting over and rebuilding its image, from the brink of extinction (twice) to respectability and stability.

SEC teams clearly like playing in the SEC. They aren't going anywhere. The Big 12 is not anywhere close to there yet, but that should be the goal.

Maybe we'll look back one day and praise Oklahoma State fans for being the pioneers of Big 12 pride.

There's a lot to like about this conference right now. Half the league is ranked in the latest Associated Press poll, Oklahoma and Oklahoma State are in the BCS Championship hunt, and the combined non-conference record of Big 12 members is currently 26-2.

I'm hopeful one day the Big 12 can become a more desirable, stable and respectable conference that is not mocked on a national level, especially given the on-field football success the league is enjoying in 2011.

Let's move to some bullet-point observations from week 4.

• I completed my fourth week of picking every Big 12 football game, straight up and against the spread. The results:

• OU fans should not be too livid the Sooners dropped from No. 1 to No. 2 in the latest Associated Press poll, despite the fact that they remain undefeated at 3-0. Sure, Oklahoma has beaten some nice teams in Florida State and Missouri, but don't fret about LSU jumping to No. 1. I have nothing against LSU being No. 1 at the moment, with victories over three ranked teams (Oregon, Mississippi State, West Virginia). LSU still needs to complete a rigorous SEC schedule, including a road contest at No. 3 Alabama on Nov. 5, and I'm guessing that results in at least one loss. OU could soon realize the benefit of competition in a 10-team, major BCS league. Should the Sooners finish the regular season undefeated, they will undoubtedly play for the BCS Championship without having to play a Big 12 championship game.

• OU's biggest test figures to come in the final game of the season, when the Sooners travel to No. 5 Oklahoma State. Could be one of the most significant Bedlam games in the history of the rivalry that dates back to 1904. 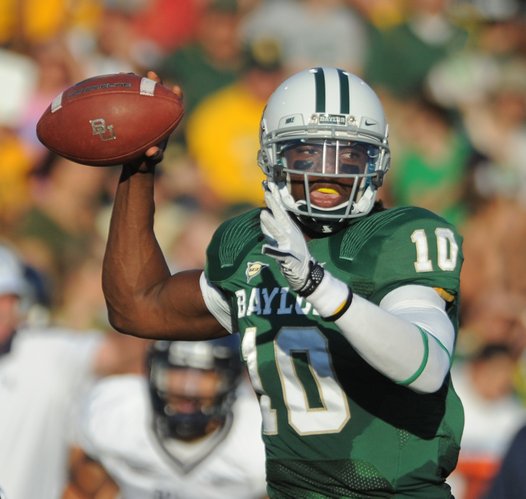 This is getting to be ridiculous. The junior has thrown more touchdown passes (13) than incomplete passes (12) through three games this season. It's silly. His season numbers: 70-of-82 for 962 yards, 13 TDs, 0 INTs. Heisman, anyone?

• The following is the latest edition of the Sorrentino Scale. The number in parentheses is what the team was ranked last week:

I was somewhat surprised at the level of instability and distrust between institutions due to the realignment mess.... I mean, the Big XII has 5 top 25 teams right now (including A&M) and 3 more schools which received votes for the top 25 (K-State, Iowa State and Mizzou)....

HAVE SOME PRIDE! (now if only KU and TTU could get their stuff together....)