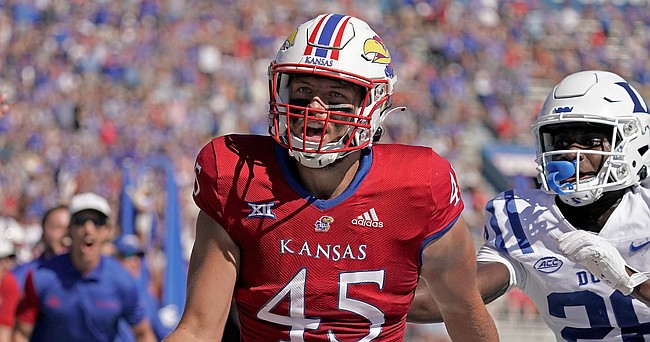 Kansas tight end Trevor Kardell is chased by Duke defensive back Joshua Pickett as he scores a touchdown during the first half of a game on Sept. 24, 2022, in Lawrence, Kan.

It was just shy of a year ago when Kansas coach Lance Leipold fully recognized the significant undertaking that lied before him.

The Jayhawks had taken their lumps earlier in Leipold's first season and headed north to Iowa State hoping to demonstrate some level of progress. Instead, they found themselves down 38 points at halftime and limped to a woeful 59-7 defeat, their latest drubbing in a decade full of them.

Those memories may not be erased on Saturday, when Kansas welcomes Iowa State to David Booth Kansas Memorial Stadium, but the wounds may finally heal. The Jayhawks, riding a wave of excitement and encouragement following their unlikely 4-0 start, will attempt to corral the Cyclones for the first time since 2014.

Junior quarterback Jalon Daniels, who has been the catalyst to Kansas' resurgence following a series of remarkable performances, said a different mindset this season has helped give everyone the belief needed to earn a victory.

Kansas isn't the only team that looks significantly different this season. Iowa State, which lost two offensive stalwarts after last season in quarterback Brock Purdy and running back Breece Hall, also has revamped its defensive scheme under coordinator Jon Heacock.

The Cyclones have embraced more of a nontraditional 3-3-5 look meant to slow down their opponents' passing attacks.

"You have two multiple-looking groups going against each other, and it's going to be about the group that can play with the most discipline and can play fast," said Kansas offensive coordinator Andy Kotelnicki. "I like how our guys are preparing. It's a challenge — a new challenge, for sure."

The game marks a return to Big 12 play for the Jayhawks, who dipped their toes into the conference waters three weeks ago with an overtime victory at West Virginia.

A win on Saturday will likely propel them into the national rankings for the first time in 13 years, and it will match their best start since their brief run atop the Big 12 under former coach Mark Mangino.

"This group knows how competitive it is and where we've been in the past and where we're going to have to be to keep moving forward," Leipold said.

1. Discipline and focus: Leipold said he doesn't want his players to play with less aggression, especially on defense, but he recognized that seven penalties for 83 yards in the win over Duke a week ago are not sustainable if the Jayhawks want to continue winning. Even last season, when everyone was still acclimating to the new coaches and schemes, Kansas averaged just four penalties for 33.7 yards per game.

2. Deep rotations: Kansas' long-awaited depth has been evident through four games as it has rotated several players at key positions. Notably, six linebackers played at least 20 snaps against Duke. "Obviously, we're going to continue to need that depth," said defensive coordinator Brian Borland, who used 23 players on defense a week ago.

3. Dekkers in control: Iowa State redshirt sophomore quarterback Hunter Dekkers is completing 71.6 percent of his passes while throwing 25.3 per game and already has thrown for 10 touchdowns and five interceptions. He replaces Purdy, who started for parts of four seasons and is now the San Francisco 49ers' backup. Kansas has some familiarity with Dekkers as he entered in mop-up time a year ago and threw five passes.

Mello Dotson and Cobee Bryant: Kansas' sophomore cornerbacks face a challenge in Iowa State redshirt senior wide receiver Xavier Hutchinson, who is averaging nine catches for 100.8 yards a game and has already caught five touchdown passes. Hutchinson set a school record last season with 83 catches and enters Saturday ranked 11th in the FBS in receiving yards per game. Dotson and Bryant each missed portions of the win against Duke with injuries so how they try to slow Hutchinson will be crucial to Kansas' success.

27: Touchdowns scored this season by the Jayhawks, who are tied with Ohio State for the most in the FBS.

7: Punts by the Jayhawks, the third fewest behind Minnesota's three and Georgia's six. Daniels, with a quick kick against Duke, has one of those seven.

14.5: Points surrendered per game by Iowa State, which leads the Big 12 and is 17th in the FBS. It allowed a combined 27 points over its first three games.

The games don't get easier, but I am glad this one is at home.

The stadium will be rocking, if there are limited penalties, we win the turnover battle, and Daniels executes how he has been, I think we will all be happy as Jayhawk fans.

This I think will be the game that the team is known for their defense that we will be facing.

I think Nebraska "leadership" will be watching this game, but I hope neither coach is Nebraska's next year. 1) I think Nebraska can find a better pool of candidates 2) I like Lance Leipold as a Leader...not in that order.

“ 3-3-5 look meant to slow down their opponents' passing attacks.”

I hope our running backs feast.

Looks like there are still quite a few tickets available. No sell out this week? I figured it was a sure thing, especially since there were only about 50 Puke fans in the stands last week. ISU travels well. Hope some more Jayhawks pick up tix and fill the Booth with blue.

Every game so far has been a "Well, it will be interesting to see where the Jayhawks are at" game, and this one is no different. Can't wait!

Does anyone know a way to sync the radio and TV broadcasts? The TV guys (and lady) we get have been brutal. I'd love to listen to the KU broadcast as I watch the game, but it's always at least several seconds off.

There are delays built into live broadcasts. Radio and TV rarely match up.

A Semisophisticated PC audio program might work, but that is going to be a hassle.

14.5 is still skewed by playing iowa. Maybe one of the most offensive offenses in the country. To some extent, that’s the same for all their D#’s.

Baylor was effective at limiting Xavier. Make someone else beat you. They seem to only have one reliable WR after him. It would be nice if our DBs could catch one of Hunter’s passes.

Same is true at RB. Jirehl is good but they don’t seem to have any significant depth.

I believe they will also be without one of their leading safeties for the first half because of a targeting call last week. Some feel it had an impact on their performance in the second half. It would be good to have a fast start.

The good news regarding penalties is that even with 8 against dook, we still lead the conference (26th nationally) with only 5/game. ISU averages over 7 per game.

Doug, I've tried the same thing, and its almost impossible.

We tried to sync up the Thursday night Chief's game on Amazon Prime, with the Chief's radio broadcast on SiriusXM. You'd think with pause and FF and RW abilities that you would be able to get it synced up, but for whatever reason the SiriusXM app didn't have FF or RW enabled. Couple that with video and audio that kept getting out of sync, on the Prime broadcast by itself, and I could have fiddled with it all game and not got it right.

If you are listening to the KU game on the terrestrial radio, it will always be ahead of the ESPN broadcast. There's more satellites to bounce off of and digital video encoding that has to happen, so video will always be slower. There is no way to slow down or pause radio broadcast over FM or AM. And as far as I know, the rights for the radio broadcast don't allow for streaming (but you CAN listen to it on SiriusXM, shrug).

I'll be looking forward to syncing up ROCK CHALK JAY HAWK with the other side of the stadium! Much easier.

Syncing can be done I do it every game. I plug a battery powered radio into the sound card of my desktop pc. Then I use a free program called "Radio Delay" on the pc which is adjustable. The signal goes out the pc into some powered speakers byt the TV. I've been doing this for close to 20 years. It takes a couple of times at the beginning of each game to get synced but it's totally worth it to me. Sometimes during commercials the tv gets out of sync but it's usually just another minor adjustment. HTH. ROCK CHALK!

One of the most helpful posts ever - thank you!!

Can all of this judging ourselves by the standard of Iowa freaking State talk stop please???

Dale - Even more so. The first 10 is SEMS. Kinda similar to Tennessee Tech. The second is Ohio, generally about the 100th best team.

Baylor’s scoring average for the year is also 31, which might indicate that ISU’s D is average. Stats get so skewed by the quality of competition, especially this early in the season, but assumptions are still made based on 4 data points.

Interesting to look at the cbs sports rankings (1-131).

Attention to little details could make all the difference in the world, or at least the Big12 standings this season.

Michael - I’m pretty sure the comparison to ISU will end next week.

I thought the announcers for the Duke game we're terrific.

It's Gameday and it is time for Iowa State...this is a good team...they embarrassed us last year...59-7...REALLY 59-7????? WTF????...oh yea...so you guys need to have entire and total focus on what you are doing today and I want you to go out there and return the FAVOR!!! You have to play a clean game..mistake free..smart football..you have to bring an extra level of physicality this week because not only do we want to win on the scoreboard...we want to WIN THE FIGHT on the field..who is ever lined up across from you...HIT THEM IN TH MOUTH!!!!>>>DOMINATE them!!!!>>> DOG THEM RELENTLESSLY!!! and show NO MERCY..drive them into the ground and make them remember today...make them remember that day in Lawrence when they got the F@#$ beat out of them...bring that kind of mentality and toughness..because this is personal...this is another STATEMENT GAME....this game will set the tone for the rest of the conference season...FOOTBALL IS FUN...FIGHTING IS FUN...HITTING PEOPLE IS FUN..so enjoy it!!! Know your assignments...know your playbook..know your opponent...know what they like to do and take it away...no penalties...no stupid mistakes...PLAY LIKE THE CHAMPIONS YOU ARE!!!...I BELIEVE IN YOU GUYS!!!!!>>>GOOD LUCK!!!