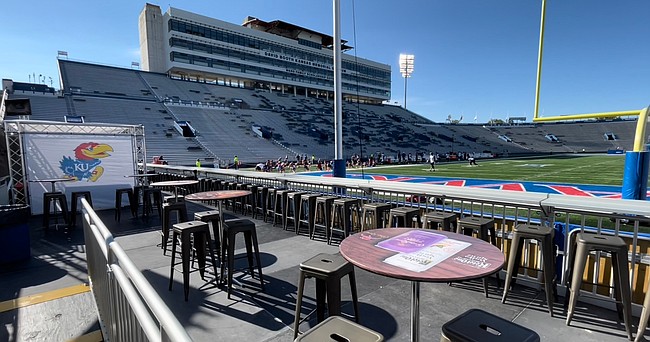 While a full-scale renovation of David Booth Kansas Memorial Stadium remains months or even years away and is still in the planning stages, big changes are happening to the venue anyway.

For one, Kansas fans are starting to fill it up.

KU officials told the Journal-World on Wednesday that nearly 12,000 new single-game tickets had been sold for Saturday’s 11 a.m. game against Duke since KU’s win at Houston last weekend.

Beyond that, administrators and KU facilities staff members are bracing to have the stadium at or near its capacity of 47,233 fans, and the fans themselves had blown up social media with campaigns begging Jayhawk fans everywhere to “Pack The Booth.” 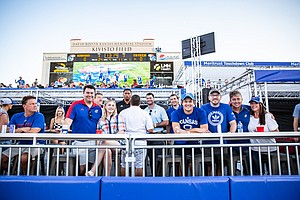 “We’re obviously really excited about all of this,” Jason Booker, KU’s deputy athletic director for external affairs and revenue generation told the Journal-World on Wednesday. “Coach Leipold and his staff and players obviously are doing the work on the field and our team has been working hard off the field and behind the scenes to make sure everyone who comes on Saturday has a great experience.”

In addition to the stadium suddenly being packed, Kansas Athletics has invested some time, effort and money into giving a few of the concepts for the future of the stadium a trial run in the newly revamped Touchdown Club in the south end zone.

What used to be a luxury seating area with limited space and oversized recliners, now features four different options for fans to tap into a variety of experiences.

The Touchdown Club, which is larger, features tiered seating and is a complete overhaul of what was there before, includes four options available at different price points.

The Wave the Wheat patio appeals to a younger crowd and is more of a standing-room-only experience, with easy access to food and drink. One season ticket for that area costs $900. 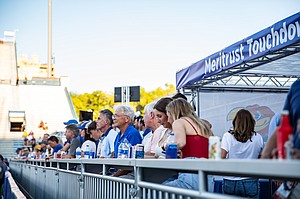 The club level includes regular seats with access to all-you-can-eat-and-drink concessions. One season ticket for that area costs $1,500.

Then there’s the Loge Seating, which features a several four-top tables that include their own television monitors for access to replays and other games and all-inclusive concessions. The price for four season tickets for that section is $6,600.

Further down, there are seven cabanas — all of which are sold out for 2022 — that seat up to 20 people and most closely resemble what the original Touchdown Club seating used to look like.

Booker said the Touchdown Club seats are sold out for Saturday and that only an extremely limited number of single tickets remain for the rest of the season.

While generating revenue was a big part of investing in redoing the area, Booker said it was equally as important to increase access to the space so KU fans who were interested could try out and get a firsthand look at the luxury seating options that might one day be available on a larger scale at a renovated Memorial Stadium.

“We had a decision of do we just keep rolling with what we’ve always done or do we go in and invest in it,” Booker told the Journal-World. “The only way we were going to generate more revenue out of the space was to get more people in there, and our main objective was to give more people the chance to experience the premium opportunity.”

Many of the options now available were featured in the recent stadium survey that Kansas Athletics sent out, and the idea of incorporating them all into the new-look Touchdown Club is to get real feedback about what fans like and do not like so they can play for the future. 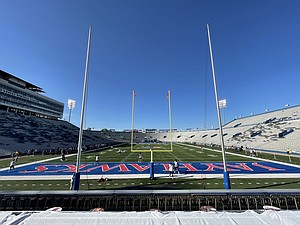 The view of the field at David Booth Kansas Memorial Stadium's from the newly revamped Touchdown Club in the stadium's south end zone.

All of the options were up and running for KU’s home opener against Tennessee Tech and Booker said the feedback from patrons was “really, really positive.”

“I think most people felt like it was a really plussed-up experience,” he said.

The public criticism of what KU has done with the Touchdown Club is that it’s merely a case of putting lipstick on a pig and Booker said KU’s administrators understand that point of view. He also made sure to point out that what’s there today represents a glimpse into what KU sees for its football future.

“We’re continuing to try to find ways to improve the stadium experience for our fans as we’re contemplating a renovated stadium,” he said. “We could sit idle and say, ‘Hey, we’re just going to kind of keep getting through it.’ But we’re trying to provide better amenities and better opportunities for people right now. It’s a temporary solution. We understand that. But it’s better than doing nothing.”

Quick tour of the new & improved Touchdown Club for 2022 in the #KUfball south end zone. It’s a major upgrade in every way & tied to the survey they sent out recently. Sort of a test run of some of this options. Check it out… pic.twitter.com/xWLcN9epf1

Glad to hear of the 12k new ticket sales. Would that be on top of the 33k for the opener? 45k is close to sold out. That would make a huge statement that far exceeds my expectations. I thought capacity was north of 50k.

Trying out the different options and getting feedback from the community is exactly what is done with community development projects. You holder a variety of neighborhood meetings and workshops where the general public, the community outside the immediate organization, get to give feedback on what they think is important. What’s needed to be successful. Staff will guide the discussions, and not everything the community says makes it into the final project, but the much of it can. Mostly though, it’s important for the community to be heard and buy in to the project.

Community buy in is even more important in this case because the greater Jayhawk community will ultimately be funding the majority of the project. Very exciting and a big hat tip towards Travis for his leadership.

As for the criticism, haters will hate.

That South End zone has always been a head scratcher for me...mind boggling stuff....but sounds like they are making money...I am a traditionalist so I don't like it when I am at the game in person.....but it really looks bad whenever I see that on TV...I personally think it's a very bad visual..it's kind of embarrassing ...IMO.

Brad, i tend to agree. You can put a hot tub in the endzone and it's still the worst spot in the stadium to watch the game. Probably not even a good vantage point for the jumbotron. I suspect people who buy those seats are more into socializing than paying attention to the game anyway. To each his own. Every dollar counts.

As of 6:45pm, 9/21, sections 1 through 20 are sold out. Sections 21 through 26 have seats available. Are those the visitor section? I'm out of state so am not very familiar with the stadium. I tried to include the screenshot of seating availability but it won't "submit."

Here is the screenshot (trying again) 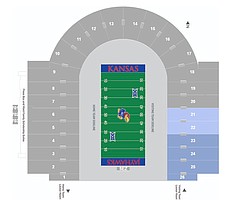 I agree with what Brad and Doug said above. I can't for the life of me understand why anyone would want to "watch" the game in the Touchdown Club, but as Dale said it's probably more about socializing than really paying attention to what's happening.

I've sat in the end zone a couple of times over the years and really hated it, especially when I was in the lower half of it, because it's so hard to see most of what's happening.

I just bought my ticket for the 11/5 game against OSU (45th row on the 45-yard-line) and can't wait. It'll be my first time back to Lawrence in a few years, and I'll also be able to go to the first basketball game against Omaha. Can't wait!

The capacity was reduced when they elected to put in the Field Goal Club or whatever it's called in the north bowl. Within the last few years. This is from the KU-K-State game notebook in 2019...

"The new capacity for the venue, according to KU officials, is 47,000. It used to be 50,071, but with the installation of the “Field Goal Club” in the north end zone many seats were lost."

There are places and people that go “to the game” to tailgate and some never even make it inside. The game is “on” so they can follow along, but the tailgate continues. Some scenarios have tvs so they can have good views of the game, and maybe even access to other games, all while continuing tailgating. In KUs examples, it’s even catered tailgates. The location definitely isn’t great, but some people are definitely interested in a full game catered tailgate. The concept will go through the roof when the top of the stands are brought closer to the field and those catered tailgates are in band of suites that encircle the stadium. The current version is just a concept test. It’s been done elsewhere, but KU needs a proof of concept. It will soon be identified as one of the best college game day experiences.

Lipstick on a pig!

It appears they have been reducing capacity numerous times

When I started at KU hundreds of people sat on the hill drinking kegs of beer, having fun and partying. Those were the days.