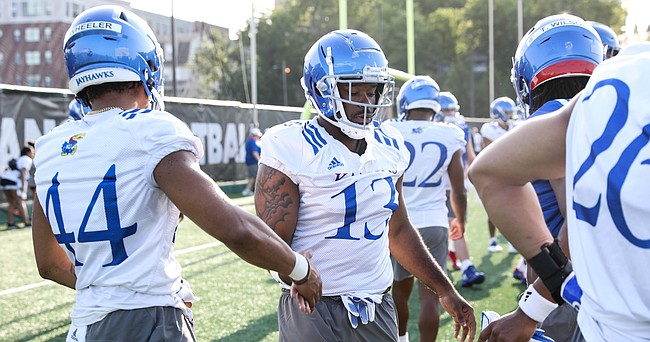 Late last week, with the start of the new season rapidly approaching, Kansas coach Lance Leipold began speaking to his players about what happened in January.

That, Leipold reminded them, is when they began working toward the success that they hope to achieve come this fall.

"Everybody's excited, and they put in all those long hours all the time in the weight room, all the things we ask," Leipold said. "First of August, you battle the heat and all the other things you've got to go through, the long days, all the preparation, and now you get a chance. ... We get 12 of these, and we have to make sure we make the most of them."

The first of the 12 will be played Friday night when the Jayhawks host Tennessee Tech at David Booth Kansas Memorial Stadium.

Kansas went 2-10 last season, its first under Leipold, and big things are expected for Year 2. Those inside the program have said for months that the greatest evidence the Jayhawks are headed in the right direction is their performance over the three-game stretch that closed the season — a surprising overtime victory at Texas, followed by narrow losses to TCU and West Virginia.

"Once I saw that, I didn't watch their early games," said fifth-year Tennessee Tech coach Dewayne Alexander, referring to his preparation for the game. "I wanted to see how they played at the end of the year."

As a middling Football Championship Subdivision opponent, the Golden Eagles will likely present the easiest challenge the Jayhawks face all year. In that respect, it's a wise tune-up for a team that still faces so many questions.

Some of them will be answered beginning Friday.

"We've been eager to play," junior quarterback Jalon Daniels said. "We've been talking about Game 1 since spring ball, since the end of last season, honestly. Just the amount of excitement to be able to get back on the field, and excited to show everybody what we've been doing."

1. Spreading the wealth: With Kwamie Lassiter II pursuing an NFL career and redshirt junior Trevor Wilson suspended indefinitely following an assault charge, Kansas' passing game will look decidedly different than it did last season. The Jayhawks maintain that they do not need one primary target to emerge, but if one does, that should start Friday. Redshirt sophomore LJ Arnold and junior Luke Grimm return, and redshirt sophomores Doug Emilien and Quentin Skinner should emerge as reliable contributors.

2. All aboard: Between the quality of opponent and the depth that the Jayhawks profess to have, expect a significant number of players to take the field. Defensive tackles coach Jim Panagos said he could rotate as many as seven players at the position and linebackers coach Chris Simpson said he thinks he feels comfortable starting five or six players at the three spots. That's to say nothing of the situation at wide receiver, the five running backs vying for a role and a secondary that has been infused with five transfers.

3. Start to finish: Will the Jayhawks be able to put together a complete performance? Leipold said he will evaluate the game based on players' execution, whether they're playing fundamentally sound, how they handle changes in momentum and what they may do in response to big plays or tough situations. If they can't do that against an overmatched opponent, it will set a poor tone for more significant games to come.

Jalon Daniels: It's go time for the junior quarterback who spent the last nine months preparing to enter Week 1 as the starter. Daniels, who finished last season in that role after the surprising overtime win at Texas, underwent ankle surgery that prevented his full participation during the spring practice window. He then took time while at home to work on understanding coverages better, slowing the game down and tightening his throwing motion. His backup, redshirt senior Jason Bean, who started the first nine games last season, had his best practices at Kansas in August, according to his coaches. Daniels still held him off to earn the title and he can continue to prove he deserves it against the weakest team the Jayhawks will face all season.

107: Combined career starts in FBS games by the 21 players who transferred to Kansas since the end of last season. No Big 12 team has added more players via transfer than the Jayhawks.

2-36: The Golden Eagles' record against I-A/FBS teams. They haven't won a game against a larger-school opponent since 1980, when they beat Western Carolina (now an FCS school).

Kansas OC Andy Kotelnicki on the Jalon Daniels/Jason Bean competition and the Jayhawks' versatility by KUsports.com

Taking the most transfers shows how far behind we were. Of the players with the 107 career starts, how many are expected to start this game?

Will there be a preview of TTech? To some extent it shouldn’t make a difference. If we play our game and a complete game, what they do shouldn’t matter. It would still be nice to have some idea of who the opponent is.

KU needs to dominate. The final point spread doesn't concern me too much, but it needs to be in the 20's and we can't let TNT score more than 17. This will show that we can dominate a team that we should be able to dominate. And that's what you have to do to keep fan interest.

It will be a 12 game season, but it is critical to approach each contest an an individual entity.

I am sure that Lance Leipold knows this, and will prepare the players to focus strictly on the Golden Eagles.

We "cannot afford" to be looking ahead!

By the way, it appears that 12 of the 21 transfers made the initial depth chart.

KU's version of "the Dirty Dozen"!